If you’re a loyal Guns.com reader you know that one of my favorite things to point out is the correlation that exits between the rise in concealed carry permits and the decline in crime over the past two decades.

As I’ve said in the past, correlation does not equal causation, but it’s difficult to deny the reality that as concealed carry rights have been expanded over the past two decades across the country, crime (property crime, violent crime, and the homicide rate) has continued to decline.

This is not conjecture, but a cold hard truth that gun control activists have an impossible time even acknowledging, let alone accepting.

A new article published by NaplesNews.com shows that in Florida, the ‘Gunshine state,’ firearm related violence is at a record low while concealed carry participation is at a record high (as reported in a previous Guns.com article, in December 2012, Florida became the first state in the nation to have 1 million active concealed carry permit holders, which turns out to be roughly 7 percent of the population eligible for CCW):

As state and national legislators consider gun control laws in the wake of last month’s Connecticut school shooting, Florida finds itself in a gun violence depression. The Firearm-involved violent crime rate has dropped 33 percent between 2007 and 2011, while the number of issued concealed weapons permits rose nearly 90 percent during that time, state records show.

In response to this news, Sean Caranna, executive director of Florida Carry Inc., told NaplesNews.com, “We’re happy to have facts and statistics put into these debates, because every time they do, we win.”

Indeed.  There are plenty of studies out there containing facts and statistics that back up this correlation (check out this recent study done in Virginia, which found a 73 percent increase in gun sales from 2006-2011 and a 24 percent decrease in gun-related violent crime over that same period).

Though, when it comes to crime data, it’s rare that everything is perfectly clean.  Meaning that the data also showed that while overall gun-related violence is down, there is a small but statistically insignificant uptick in the percentage of murders that involve a firearm:

Florida statistics show murderers are increasingly using firearms. Between 2000 and 2005, Florida’s firearm-involved murder rate never topped 3.5 per 100,000 residents. Every year since, it’s exceeded that number. And in 2011, for the first time on record, guns were used in more than 70 percent of homicides.

So to clarify, while the murder rate remains relatively low, the number of murders involving a firearm has increased slightly.

However, looking at the entire situation pragmatically (an overall reduction in firearm-related violent crime for a slight bump in the percentage of homicides involving a firearm) and when compared to the alternative (a place like Chicago that outright bans concealed carry yet leads the nation in murders), it is more than a fair trade off. 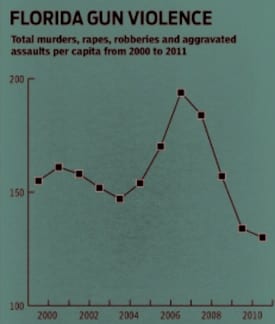 Though, that won’t stop gun control activists from speculating about what could happen if stricter gun laws were imposed.

“It’s difficult to attach gun control to the reduction of crime, and vice versa,” Arthur Hayhoe, executive director of the Florida Coalition to Stop Gun Violence, told NaplesNews.com. “We don’t know what works. We can’t prove that gun control works because we don’t have gun control laws.”

Obviously, Mr. Hayhoe is uninformed.  We know that certain gun control measures, like the Clinton-era Federal Assault Weapons Ban, are ineffective at reducing violence.  We know that placing restrictions on concealed carry don’t work either; again, consider the Windy City.

We also know based on the above data and graphs that there is a negative relationship between gun ownership and crime, that is, they’re moving in the opposite direction.  As gun ownership and concealed carry goes up, crime (again, including gun-related violent crime) goes down.

So, if we know all of that to be true, why on God’s green earth would one want to disrupt the current trend by ushering in new draconian gun laws that subvert the Constitution and inhibit one’s fundamental right of self-defense?

No matter one’s politics, it just doesn’t make any rational sense to meddle with the rights of law-abiding gun owners.