Gun Groups Are Asking You to Support ‘Gun Appreciation Day’ on Jan. 19

As pro-gun control forces in and around Washington begin to mobilize their base to support various bills that will severely restrict the rights of law-abiding gun owners, a broad coalition of organizations including the Second Amendment Foundation and the Citizens Committee for the Right to Keep and Bear Arms are fighting back.

With the launch of the first national ‘Gun Appreciation Day’ on Jan. 19, a grass roots effort designed to protest the draconian gun laws being discussed in Washington (‘assault weapons ban,’ national handgun registry, ban on online ammo sales and high-capacity magazines, among others), organizers are hoping to show the White House that the American people will not sit by idly as the government attempts to radically alter the Second Amendment. 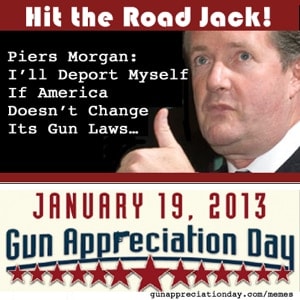 “We need to ban politicians who assault our rights,” said Alan Gottlieb, the SAF’s executive vice president, in a press release, “not firearms that are used thousands of times a day to protect lives and property from criminal attack.”

“The Obama administration has shown that it is more than willing to trample the Constitution to impose its dictates upon the American people,” added Gun Appreciation Day chairman Larry Ward, president of Political Media, Inc. “If the American people don’t fight back now, Obama will do the Second Amendment what he has already done to the First with Obamacare – gut it without a moment’s thought to our basic constitutional rights.”

Gun Appreciation Day is on Jan. 19, exactly two days before President Obama is sworn in for his second term on Jan. 21.  Organizers said this was intentional, the close proximity to Obama’s inauguration provides for maximum visibility.

“We want the president and his allies on Capitol Hill to understand their new push will result in a shove back from the people,” Gottlieb exclaimed. “Millions of law-abiding firearms owners are not about to be penalized for the unconscionable act of a madman. We will not all be judged by the conduct of a single crazy person.”

“Our intent is to telegraph a message to Congress and state legislatures around the country that trampling our rights is not an acceptable solution to violent crimes committed by people who don’t care about laws, much less the lives of the people they harm,” he added.

So, what can you do to be a part of Gun Appreciation Day? 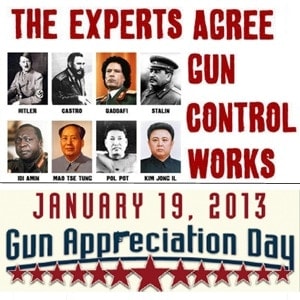 Well, organizers say you should turn out in droves at gun stores, gun counters, gun shows, and gun ranges on Jan 19.  In lieu of participating in person, via social media, you can share (Facebook ‘like’ or Tweet, etc.) different pro-gun memes with your friends.

Also, you can sign the ‘Petition to Defend Gun Rights,’ which includes many important facts and axioms, among them, “George Mason, the Father of the Bill of Rights, summed it up best when he said, ‘To disarm the people is the best and most effectual way to enslave them.’”

You can read more about Gun Appreciation Day and what it entails by visiting the website: https://gunappreciationday.com/.

As the battle over gun rights heats up, we’re going to need more initiatives like Gun Appreciation Day to ensure our message reaches lawmakers in Washington and the non-gun owning public that doesn’t have a dog in the fight (i.e. the unbiased public).  We must continue to win hearts and minds via social action.  Gun Appreciation Day seems like a great way to get the ball rolling – your thoughts?