In the early hours of Wednesday, Jan. 2, a Phoenix man attempted to enter several homes and vehicles in a Phoenix neighborhood.  He was behaving erratically, and had attracted attention to himself when he set off a car alarm.  Residents, watching his progress, phoned police.  But the man didn’t stop.

Instead, he tried one last house.

Crystal Cruz of Phoenix’s 3TV News reports that the family’s dogs sounded the alarm.  The homeowner (who wishes to remain anonymous),  armed with a handgun, investigated and found the suspected burglar on the front porch, trying to break into a window.  The window led into a bedroom where the homeowner’s two daughters were sleeping.

The armed homeowner yelled for the man to stop, but he ignored the commands.  Instead, the suspected burglar reached for his front pocket.  At that point the homeowner shot him. 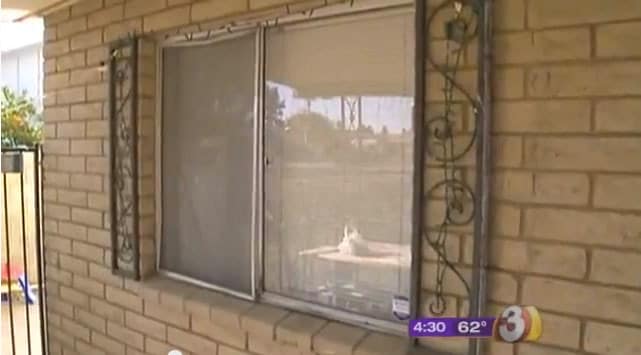 The Window the suspect was attempting to enter.

The police had still not arrived.  When they did, they found the wounded man, who has since been identified as 35 year old Jason Floyd Wilson, in the street.  That was as far as Wilson made it after being shot.  He later died in the hospital.

Though the deceased was unarmed, few are questioning the homeowner’s actions.  3TV News quotes Phoenix police Officer James Holmes, who said “It appears that his intent was to defend himself and his family.  First of all, we’ve got to find out who the suspect is, what caused the behavior he displayed this morning and make sure that the homeowner was justified in his actions.”

Until such a decision is reached, the neighborhood is left to wonder why Wilson was wandering their streets, intent on breaking in to something, and why he refused to listen to reasonable demands.