When was the last time you went into an old fashioned brick-and-mortar gun store?  In the last two weeks?  If so, this shouldn’t come as a surprise to you.  Guns are selling well.  Very well.  And the available stock isn’t being replaced quickly. Part of this has to do with it being the end of the year.  But let’s be honest.  People are buying guns.

But I went into my local shop this week and there is a fantastic gun there, still.  The Ruger SP101 is ubiquitous and readily available.  And it is a gun that appears to be exempt from even the most egregious of the proposed legislation.  It is a five shot.  It isn’t black, or particularly panic inducing (unless you are looking at the business end).  And it is a solid piece of American craftsmanship.

And it works perfectly.  I’ve carried a number of polymer, stainless, and blued semi-automatics that work well when all of the planets are in alignment.  I also train for stove-pipes, failures to feed, dropped magazines, and light strikes (all of which I have experienced with various concealed carry semi-automatics).

I’ve never had a problem with a revolver.  That’s not to say that others haven’t.  It is just to point out that problems are much less frequent in a gun that is as over-built as the Ruger SP101.  Take the hammer fall, for example.  The transfer bar between the pin and the hammer effectively transfers energy from the hammer to the pin, but drops below the pin when the hammer is at rest to prevent any sort of accidental misfire.

And the presence of the hammer itself means that the potential for accuracy is increased.  The double action pull is stout, but easily staged.  But the single action trigger pull is light enough for really precise work. 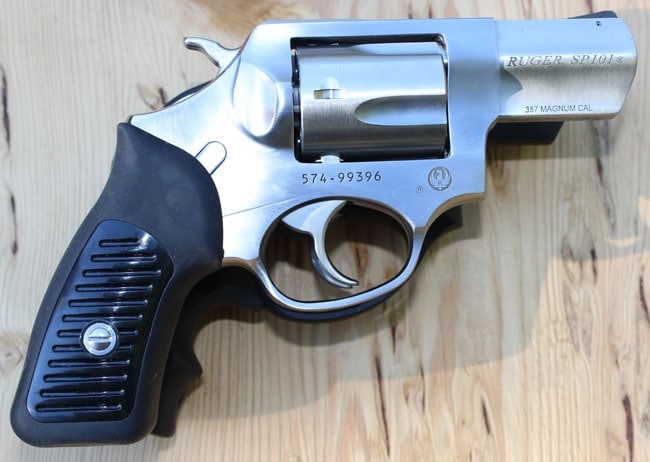 The two options for trigger work make the SP101 versitle.  The sights are reasonable, and typical for a snub-nosed revolver.  The front blade is pinned in place (so there are options if you don’t like the flat black blade).  The rear sight is milled into the frame. 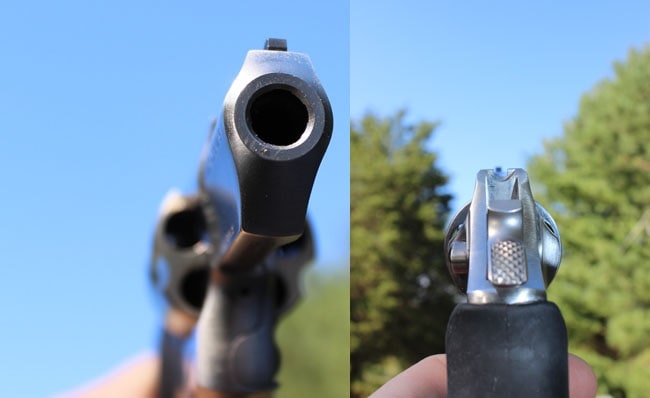 From seven yards, I can group all five shots within a five inch diameter.  But that’s not the point of a gun like this.  When point shooting, I can keep all five shots on the torso of a target.  A head shot, like is required for some qualifying courses, takes a bit more precision, but is easily accomplished with use of the sights.  Jacob and I tried the LAPD course with this gun.  We couldn’t clear the first stage (in which we had 28 seconds to make twelve hits–four of which were head shots).  The problem was the reloads.  We both could clear the round in 30 seconds, easily, but the reloads ate up too much time.

Distance work is a bit more complicated.  At 25 yards, I’m able to hit a 10″ target.  But that’s about it.  Anything smaller than that and I’m not consistent.

There are two points to make here.  The first is the easiest.  Because there are many snub-nosed revolvers out there, the options for holsters are limitless.  Anything you can think of, any material, any carry style–it is readily available.

The second consideration is more practical.  There are some who shy away from a revolver like the SP101 becase of the exposed hammer.  Many prefer the Ruger LCR, or other hamerless varieties.  Duly noted.  It is possible that the exposed hammer might hang up in clothing during a deep cover draw.  But practice helps.  I’ve got a reasonably smooth draw that places my thumb on the hammer as I pull.  I don’t cock the hammer as I draw, but my thumb hits the spur and rests there until the gun is clear.  And I’ve never had a problem with it.

This is one simple concept.  It is this simplicity that makes it so reliable.  Pull the trigger and the gun goes.  The size is small enough, yet not so small that it is hard to handle.  It is heavy, over a pound and a half loaded, but that really helps with the recoil.

I keep coming back to the possibilities.  .357 is great.  The numerous varieties of .38 mean even more options.  Hornady is even making extra light .38s now.

And they’re available.  That says something.  Some of that availability may be due to a bit of sticker shock.  Some people recoil from the SP101’s MSRP of $659.  But the guns are often marked much lower.  And you get what you pay for.