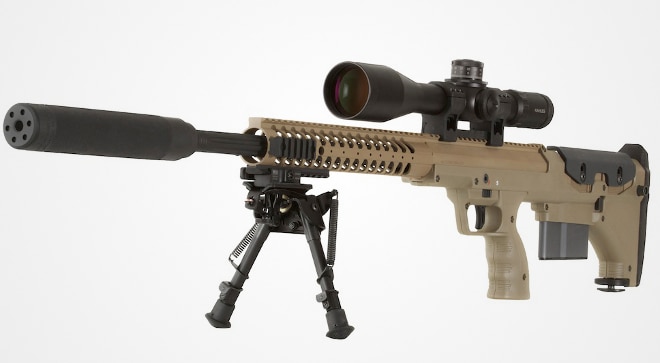 Desert Tactical Arms is updating their caliber-hopping SRS (Stealth Recon Scout) rifle for 2013. They’re adding a handful of features to their guaranteed 1/2-MOA modular chassis that many people have come to expect with firearms of this class. From the SRS product page:

“The SRS is the shortest purpose-built sniper rifle in the world. The telescoping bolt and bullpup configuration make it almost a foot shorter than conventional Mauser-style turnbolt sniper rifles. The compact design shifts weight and center-of-gravity rearward, creating a perfectly balanced and relatively short sniper rifle.”

The SRS, now the SRS-A1, is a bolt-action bullpup sniper rifle that’s designed for anyone looking to traveling light, carrying the most compact sniper rifle package possible, whether they are military, law enforcement or long-range shooting enthusiasts. 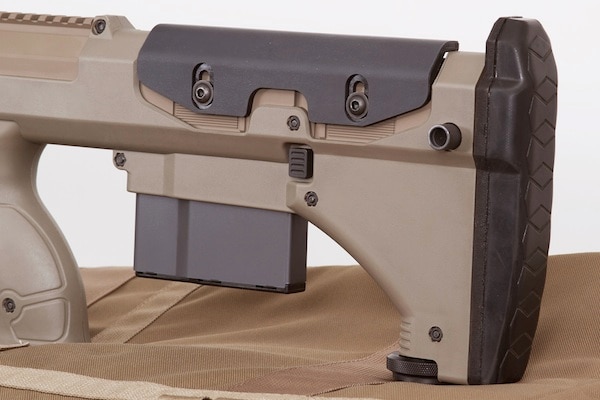 Changes to the SRS-A1 include a new adjustable rubber-molded cheek piece, which uses a simple hex key system to raise and lower the riser. In its lowest position, it remains flush with the stock. The A1 also has a new quick-detach buttpad system that simplifies changing the rifle’s length of pull. The buttpad has also been redesigned with more padding.

Also, the handguard has been redesigned with a modular rail system. It maintains the full-length 12-o’clock rail, but now uses optional rail sections that can be screwed into the handguard wherever you choose for just the right amount of rail necessary, without adding any unwanted mass to the handguard. 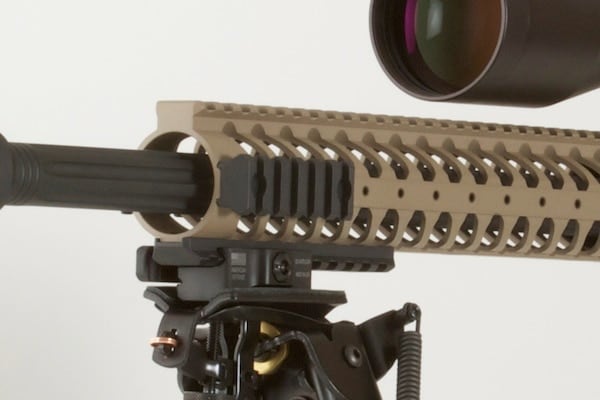 The rest of the rifle has been left unchanged, so it’s still one of the shortest, lightest bolt-action rifles in its class. Depending on the barrel length and caliber selected, the SRS-A1 measures just 32 inches in length (with a 22-inch barrel) and weighs about 11 pounds. On the outside it measures just shy of 40 inches long, weighing in at a little over 12 pounds.

One of the things that makes the SRS special is the quick-change caliber system. With a few turns of a wrench, it’s possible to go from .308 Winchester to .338 Lapua Magnum; all you need is the appropriate barrel, bolt and magazine. And the mounting system is renown for returning to zero.

The SRS chassis can be outfitted in a nice variety of calibers and cartridges, including .308 Winchester, .260 Remington, 6.5×47 Lapua, 7mm Winchester Short Mag, .300 Winchester Magnum, .338 Norma Magnum and .338 Lapua Magnum. A complete rifle runs between $4,126 and $4,476 depending on the chambering and barrel length, although the chassis and conversion kits may be purchased separately.

The A1 features make the SRS even more compelling as a precision rifle. Whether you’re interested in it for the multi-caliber platform or it’s size and weight, check out Desert Tactical Arms. They will be shipping the A1 starting this March.