The Giant Gasser Revolver: the BFR of 1870 (VIDEO)

Today, there seems to be an arms race to make exceptionally large revolvers that fire huge rounds—as witnessed by the S&W 500, the BFR and others. However this is nothing new as something very similar to this occurred over 140 years ago. The location was central Europe, the time was the 1870s, and the gun that started the ruckus was a behemoth known as the Gasser.

The Austrian Army in the late 1860s was coming off a brutal defeat at the hands of Prussia in the Seven Weeks War. Looking for new firearms to modernize their forces, the hunt was on for a modern revolver. The revolver needed to be able to fire a down-loaded version of the standard Werndl cavalry rifle’s cartridge adopted at the same time. The firm of Mr. Leopold Gasser gave it a stab and the rest is big wheelgun history.

Design of the Gasser

Leopold scratched his head and in 1870 patented an open-frame revolver that was simply a barrel, trigger housing, broomstick grip, and rotating cylinder. Revolutionary for its time, it was double-action. Keep in mind that the best revolvers of the US Civil War, just five years before, were single-action percussion-capped revolvers.

The revolver was chambered for the centerfire 11mm Gasser-Montenegrin. This round, a 11.3x36mmR black powder cartridge, fired a 310-grain lead round nose at somewhere near what we could call low velocity but generated about 300-ft/lbs of energy (about as much as a modern 9mm Parabellum). For size comparison, the smokeless .44 Rem Mag of today is 10.92x33mmR in metric speak, so you can see the close similarity between the two in size.

To accommodate this outsized cartridge, the Gasser revolver needed to be substantial in size. A 9.5-inch long rifled barrel with a large blade front sight made the overall length just over 14-inches long. A weight of more than three pounds unloaded meant the revolver was a handful. When compared to other blackpowder cartridge revolvers of its era such as the 47-ounce S&W No.3, and the 37-ounce Colt SAA, the Gasser was in a whole ‘nother league. In fact, the revolver may be the largest cartridge-firing handgun ever adopted by a military force.

It was formally adopted as the Armeerevolver M70 and, with its cast iron frame updated to a cast-steel frame in 1874, subsequently dubbed the M70/74.

These huge weapons were a big hit (excuse the pun) with the public when they were introduced and they sold well for Gasser for more than twenty years. It’s estimated that of the 200,000 real Gassers made, only about 1/8th were for the Austrian Army. They were sold abroad and were issued to military forces by 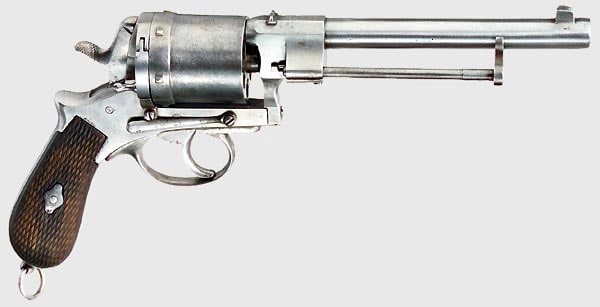 many smaller countries (Montenegro) and major powers (the Ottoman Empire) alike. The King of Montenegro, Nicholas I, decreed that every adult male purchase and maintain ‘at least one Gasser pattern revolver’ (prompting many historians to wonder if he had stock in the company). Pancho Villa even bought 5000 of them on the international arms market in the 1910s.

With such success, French, Spanish, and Belgian gun makers of all sizes started to make Gasser knock offs right up to the beginning of WWI in 1914. These guns, tendered in a variety of calibers, often have extensive niello scrollwork, exotic grip panels, and engravings. Gassers of all kinds saw service in the hands of both Austrian troops and Balkan irregulars not only in the First World War, but in the Second as well (even though incredibly “obsolete” by then).

Today, these big wheel guns are a collectors’ dream. Genuine pre-1898 Gassers will be marked “L Gasser Wien L.G” and have a hanging apple pierced by arrow schutzmark. Knockoff Gassers will not have these marks, and in fact, often have no marks whatsoever, but some can be a little more tricky to spot. For instance, one German cloner duplicated the factory marks with just one ‘S’ in Gasser and had the arrow 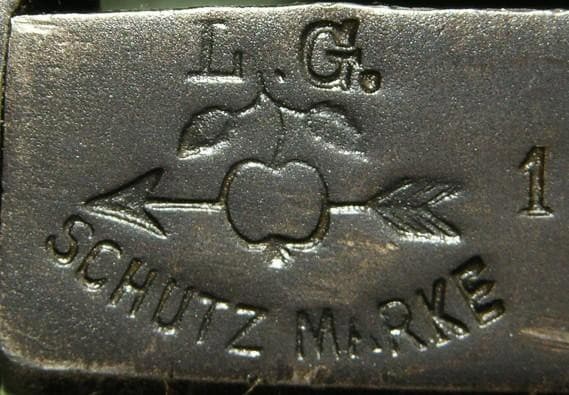 boring the apple to the right, rather than to the left, so be careful. In either case though, these guns can run into the four-figure mark very fast.

Ammunition for Gasser revolvers however is about as rare as you can get. The 11mm Gasser-Montenegrin round, the most common caliber for these beasts, has been out of production for nearly a century. Handloaders have had success with cut down cases and a few custom loaders out there have made low-power gallery rounds for these guns. The point here (as with shooting any reloads you didn’t hand load yourself) is to be careful shooting any Gasser. Remember that real or knock-off, these guns were all made for black powder rounds and often used odd metallurgy in their manufacture. Also remember, the proofmark “Gussstahl,” when found on these guns should not be confused as being a Gasser-only mark. This simply means “cast-steel” and indicates the Bessemer type of early low-grade steel used in their construction.

Typically, these hand cannons are in excellent condition when found. Many came into this country early in the last century with immigrants and have passed through generations hiding in trunks and closets until they pop up at gun shows and pawnshops. Like the huge revolvers of today, they were often shown but seldom shot.