As someone who is always happy to introduce people to shooting, I’ve spent my fair share of time with beginners. I know that the best way to get people into guns is to simply hand them one; it’s success rate is stellar.

One interesting sub-category of shooters are people who have tried it and don’t like it. Either they were beat up by the recoil monster or they simply didn’t shoot well, and have no interest in going back just for more embarrassment.

This isn’t the beginner’s fault. It’s their first instructor’s fault. Whether it’s an asshole boyfriend that ropes a new shooter to the range for laughs or the well-intentioned experienced shooter who simply doesn’t remember what it’s like to be a beginner and lets his friend bite off more than he or she can chew, a bad first step into the world of guns can, in many cases, be a person’s last.

This is particularly common with handgun shooting. You’re a lot closer to the muzzle of a handgun than a rifle; they’re harder to use than rifles or shotguns and can be very intimidating for beginners.

There are two things bad instructors let beginner handgunners do wrong that I see commonly. They let them lean away from the gun and they let them hold the gun loosely.

Holding a gun loosely can make it malfunction, as is the case with limp-wristing to the point where the gun doesn’t eject or feed properly, but it can also just make you a bad shot. While not as important with revolvers as with self-loading handguns, a loose grip with a semi-automatic pistol can screw with a new shooter by throwing a lot of muzzle flip in their direction, which leads to shaking and just poor aim.

A friend of mine, who used to think he could not use handguns, literally, to save his life, told me his first instructor, a small giant serving in our armed forces, told him to “just let the gun rest in your hands.”

It occurred to me that his instructor’s loose grip is my friend’s hang-on-for-dear-life grip.

My new thing, and maybe it will last me for a lifetime and maybe I’ll learn a different way down the road, is to tell new handgunners to grip the gun as hard as you can. The back off, relax to the point where you’re gripping it hard, but you could hold it like that all day long if you had to.

The rest is standard fare, look at the front sight, light on both sides, front sight on the target, exhale, bang.

Also, hang that butt out like a sign. What’s that? Oh yeah, it’s so you lean forward. But you got nice assets, share them with the world. 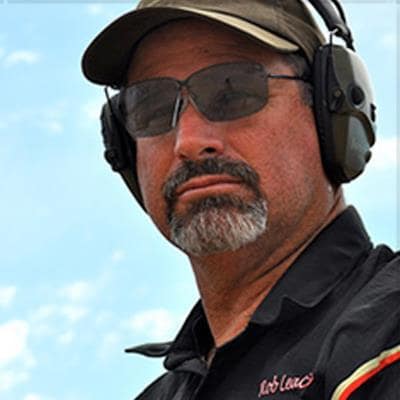 I’m not a professional instructor. I’m not going to teach people how to do tactical reloads and one-handed charging techniques. But it makes me sad to see new shooters empty one magazine, set the gun down, and leave. All because the shooter wasn’t given enough going into it.

If you’ve ever found yourself disheartened, particularly with handguns, maybe it’s time to give it another chance.

And if you’re still limp-wristing it, get yourself one of those grippy hand strongerizers. The kind with a separate spring for each finger. Who says you need core strength? Just maintain your Rob Leatham figure, you’ll be fine.