With the fate of our Second Amendment rights hanging in the balance, Ruger Firearms is taking action and jumping into the political fray.

I am a law-abiding citizen and responsible gun owner.

I am saddened by the tragic events in Newtown, Connecticut, but I believe that efforts to impose new restrictions on me and other lawful and responsible owners like me are misguided. Did you know that violent crime with firearms has declined since the Federal “assault weapons ban” expired in 2004?

Your focus should be on strengthening mental health care and improving the quality of data supporting NICs checks (National Instant Criminal Background Check System). Do NOT pass more gun laws; instead, work to enforce the more than 20,000 gun laws already on the books.

I am your constituent and I vote. Please represent me.

At SHOT Show 2013, Guns.com had a chance to speak with Ruger CEO Michael Fifer about the overall objective of the ‘Take Action Now’ campaign and the impact he hopes it has on the national debate over gun control.

“There are 80 or 90 million households that lawfully own guns, but the problem is they’re a silent majority and they’re not speaking up,” said Fifer.

“See, there are a lot of barriers to speaking up, first you have to find all the contact information, then you have to write something and if you try phone calling you’ll get some legislative aid.  It’s hard to break through.”

Indeed.  Anyone who has ever tried to contact a lawmaker or politician knows that it can be a major pain.

“So we decided to take all those barriers away, all you have to do is click on the link, put in your name and address and hit send, and it will send off 11 emails, right then, immediately, to your state rep, state senator, state attorney general, state governor, congressman, senator, the president… it gets the message out to everybody right away.”

Essentially, it’s one-stop shopping for gun rights activists.  And while some may question the campaign’s impersonal nature, that is, thousands upon thousands of people sending the same exact letter (nothing’s personalized), Fifer explained that it’s not quality that matters – but quantity.

“The content of the message, the letter, isn’t that critical because they’re not going to read it anyway,” said Fifer.  “The way their offices work is that they just count votes in one column or another and so the subject line of all those emails states, ‘I Support Gun Rights’ and that’s all that lawmakers and politicians need to see and they put another number in the ‘I Support Gun Rights’ column.” 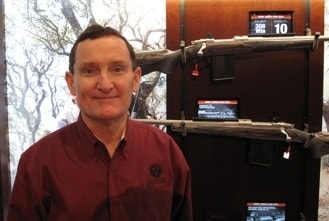 Yes, politicians are lazy.  And it stands to reason that even if they ignore the first 1,000 emails/letters, sooner or later, upon receiving another 1,000 or so, they should start to pay attention.  Given this fact, Fifer hopes the campaign reaches a critical mass of 20 million participants.

Fifer’s absolutely correct.  It’s time to speak up (if you haven’t already).  Click here to join Ruger and their fight for gun rights.