At the 2013 SHOT Show, 5.11 Tactical raised the bar for concealed carry clothing companies by showing off a new holster shirts and jacket.

Starting with the holster shirt, it’s a similar concept to the Deep Conceal concealed carry rig in that it’s designed to hug the body so you can carry a ccw handgun comfortably under a shirt. And while it’s the same concept, 5.11’s design isn’t as much of a rig that you slip on and off as it is just an undershirt. 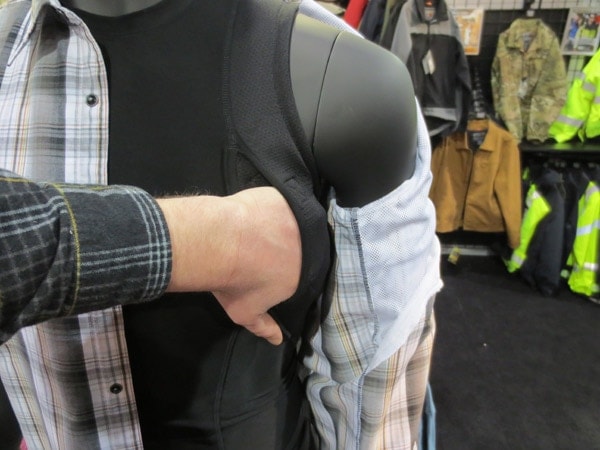 The carry pocket is large enough to hold a full-size handgun, or the author’s hand.

It has two pockets — one under both armpits — and is large enough to hold a full-size handgun. Once the gun is in place, there’s an inner neoprene layer for padding around where the gun would sit, a mesh layer designed to prevent printing and velcro to secure the pocket shut.

Although this isn’t a new concept — 5.11 already offers carry T-shirts and V-necks — the new product is a sleeveless undershirt for men and women.

It’s available in five different sizes, and comes in your choice of white or black. MSRP is $74.99. 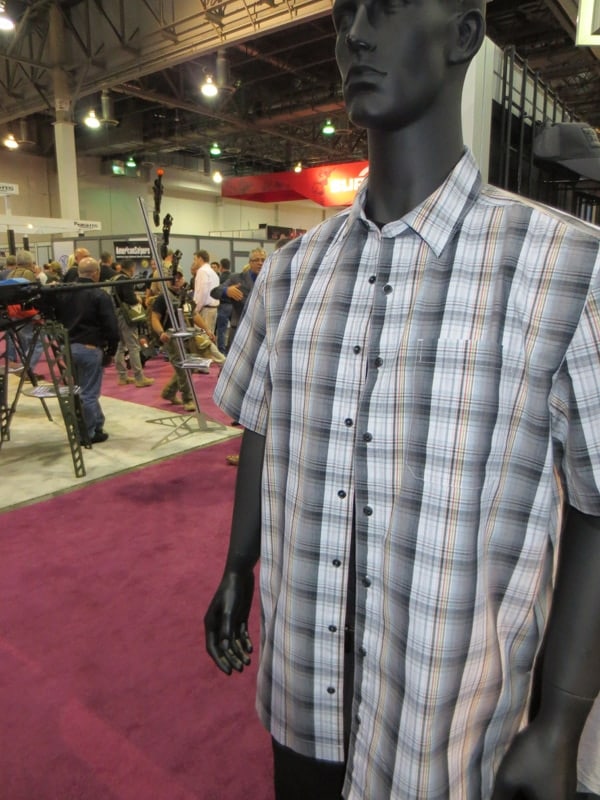 When you aren’t carrying a gun in the Covert shirt, you can carry something else: pack of gum, cell phone, or even piece of paper.

Up next is are the numerous new patterns for the concealed carry collared shirts. The philosophy behind the “Covert” shirts is for short-term concealed carry — if you use it to carry — because, well, it would probably uncomfortably unstable. By short term we mean a few minutes; standing in line at the grocery or a gas station. Otherwise it would prove advantageous for carrying numerous other items.

The carry pocket, if you want to call it that, is actually a mesh pocket right behind the buttons and it secures shut with velcro.

The fabric is smooth and a bit on the heavy-side, but not burdening. It’s a nylon (70 percent) and polyester blend. It uses faux buttons, or snaps that look like buttons, something that 5.11 coined “RapidDraw” because you can quickly undo the shirt and grab your gun (maybe in a holster shirt).

Lots of different patterns, sizes range from medium to 3XL. MSRP is $64.99. 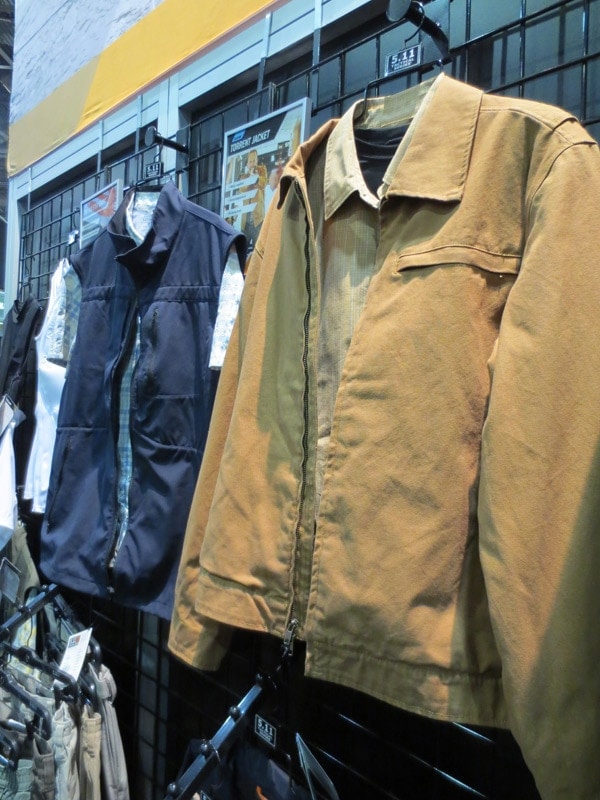 While the inside pockets can hold a gun, magazines, ink stick, tape recorder, etc, the outside pockets keep your hands warm.

The last new product, also in the spirit of concealed carry, is the new 5.11 Torrent jacket. And it’s closet “tacticool”.

On the outside it resembles a plain utility jacket similar to something like a Carhartt, but the interior is lined with a web/MOLLE platform for, well, whatever you want.

The Torrent is made of 100 percent cotton twill, has a water repellent finish and has hand warming pockets.

What makes it apt for concealed carry? Inside, it’s pockets galore. According to 5.11 you should be able to comfortably carry a full-size gun and two full mags easily in the jacket.

The Torrent jacket comes in eight sizes ranging from X-small to 4XL. It’s available in duck brown, grey and pine (what, no black?). MSRP isn’t bad at $189.