U.S. Firearm is known for their attention to craft.  Their revolvers are things of beauty and favorites of the cowboy action shooters.  They are precise and historically accurate.  So it might seem strange that the company would suddenly embrace rimfire and polymer.  But not just polymer — radical polymer.

But the idea isn’t exactly new.  Doug Donnelly is the President, CEO, founder and inventor of Zip.  He thought of the idea 20 years ago, just as U.S. Firearms was getting started.  But Polymer was not so well received then and the technology needed to make the Zip simply didn’t exist in any feasible form.  So the idea gestated for a couple of decades.  Waiting.  As technology caught up with Donnelly’s vision (including 3-D printing for prototypes), the Zip seemed like a good change of pace for U.S. Firearms. 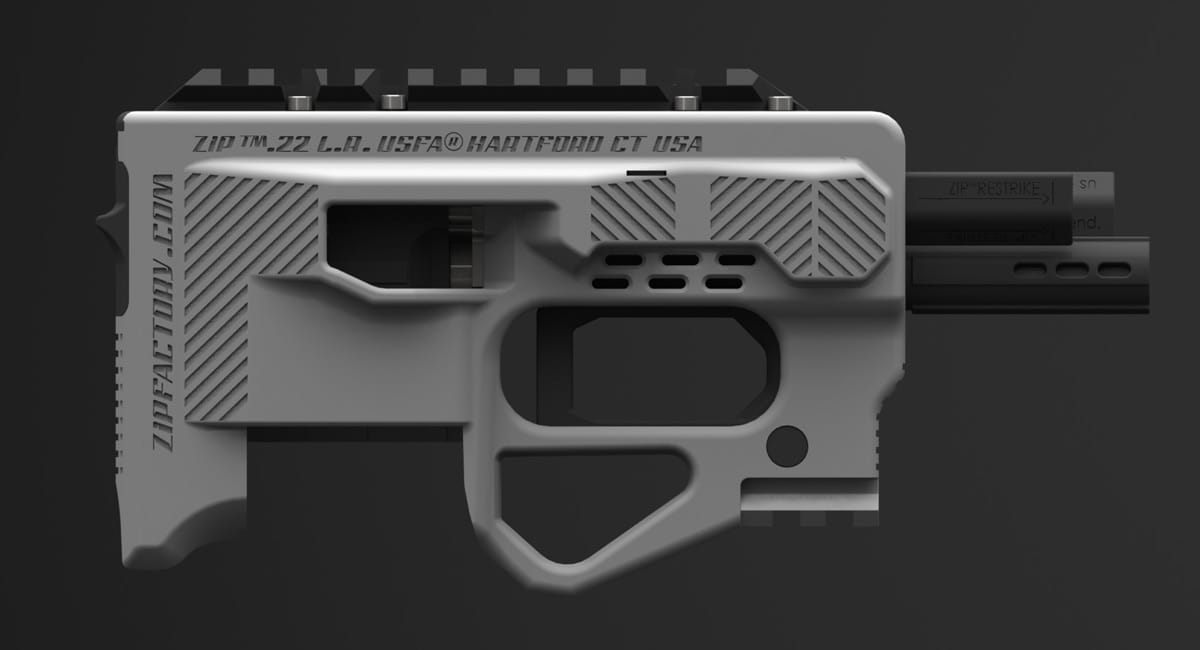 The Zip gun is hard to describe.  It is a .22 LR.  The gun accepts Ruger 10/22 magazines.  It is a bit square, and lacks a traditional grip structure.  When I first saw photos of the gun, I didn’t understand the grip, but it fits in the hand much more naturally than it would appear.

The odd design aesthetics play into one element of its success.  Because the shooting hand wraps around the back, the recoil energy drives back into the hand.  This keeps down muzzle flip and helps to increase the potential for rapid repeat shots.  When combined with the straight motion of the 1911-like trigger and a super short reset, the Zip gun is fast.

The Zip is a low cost gun.  The MSRP is right at $200.  At this price point, an American made .22 LR with a better than five-inch barrel is going to sell well.  And the .22 LR is so easy to afford.  This makes the Zip a logical choice for the price minded plinker. 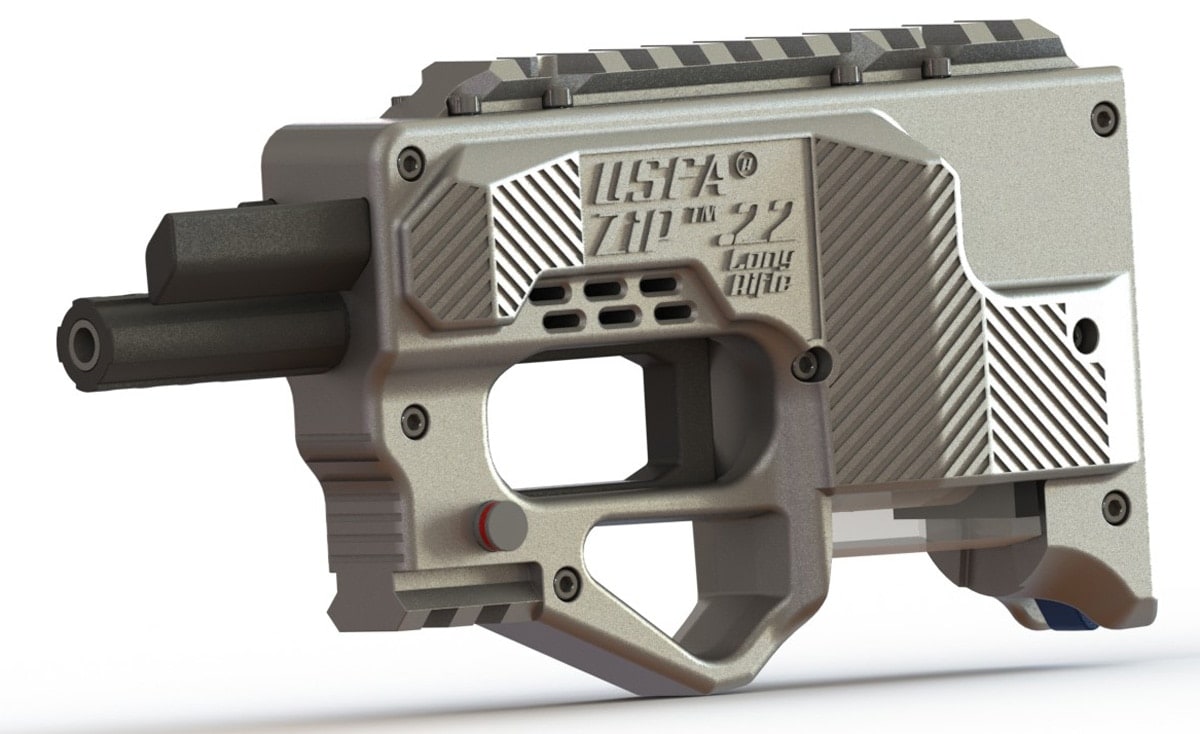 But it has other potentials. Donnelly, the one who conceived of the design, thinks the fun gun might have some serious applications.  With the interchangeable tops on the Zip, there are numerous available design options.  One would be a Picatinny rail system that would allow the Zip to be mounted under the barrel of an AR-15, or something similar. 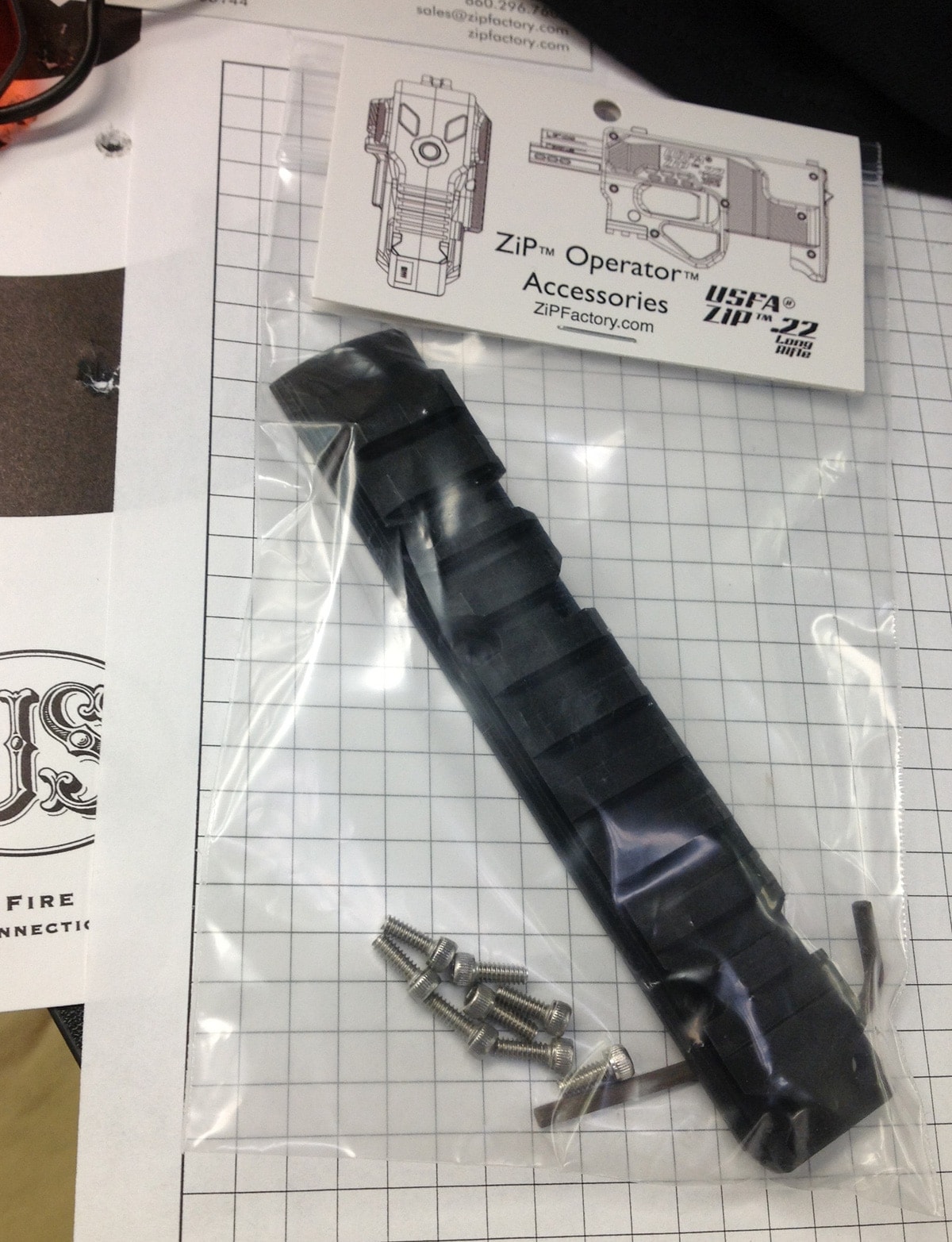 The top rail for the Zip gun.

Why would you want a .22 LR on an AR?  Donnelly sees the potential for a less-than-lethal option for law enforcement.  In a situation where an assailant might need to be incapacitated, the .22 LR would be a decent option-of-last-resort.  Because the Zip would be functioning as a forward grip, it could be operated with the left hand while the right hand stays on the trigger of the AR, just in case you were to need another, more lethal, last resort.

Mounting a Zip in this manner turns into a short barreled rifle, technically, so get you paperwork ready for the ATF.  Or simply leave it off of your AR and keep your inexpensive fun gun.

There is one aspect of the Zip’s design that has raised some eyebrows.  The controls for the gun are really close to the business end of the barrel. To cock the gun, a shooter needs to reach toward the end of the barrel.  While there isn’t any inherent danger (if you’re careful), it can make some shooters uncomfortable.

But apart from that, it is fun.  It takes a while to get the feel for the gun, and to learn the controls.  But it should.  This isn’t like anything you’ve ever seen before.

The last thing that deserves to be mentioned is a bit of a tease.  The Zip is comprised of two main halves.  The right side of the gun is technically the receiver.  The left side, and most of the guts, are replaceable.  Any modifications made to the Zip will be made to the replaceable parts, not the receiver.  So any new features can be added without having to buy a newer version of the gun. 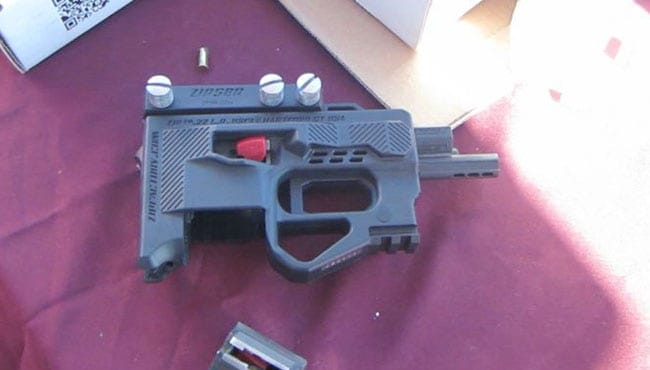 It is a big gamble for U.S. Firearms, for sure.  But the time is right.  While single action revolvers are a staple, they appeal to a a niche market.  After 20 years of success in that market, it was time for a change.  And U.S. Firearms is going away.  Simply branching out. 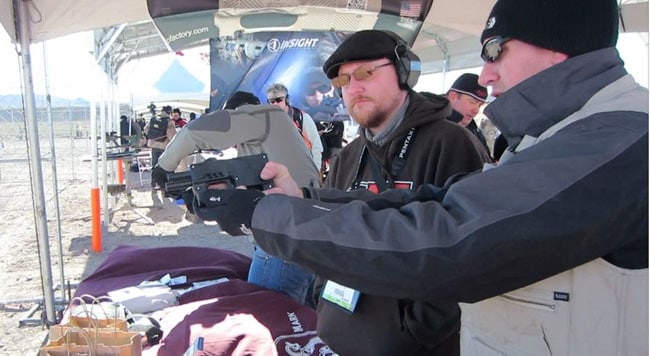 The big surprise for us at SHOT this week was actually the absence of Zip. (Correction: Zip was displayed at the Davidson booth, a logical error on Guns.com’s part. As the video above suggest, we had a brief chance to shoot it.  But something was amiss, I think.  The Zip crew packed up early because, from what we saw, technical issues, so we didn’t even get a chance to take many pictures.  And they’re not at the show.

It is a curious development, for sure.  Rest assured we’ll have more for fans of the Zip.  Guns.com’s test gun is on the way, and we’re going to put it to the test.  And we’ll get to the bottom of Zip’s zippy appearance at SHOT.