Amidst the hustle and bustle at SHOT Show 2013, Guns.com managed to track down Second Amendment Foundation Executive Vice President Alan Gottlieb to get his thoughts on President Obama’s plan to “protect our children and our communities by reducing gun violence.”

Specifically, we asked Mr. Gottlieb about the package of gun control proposals, which called for Congress to pass a “meaningful” assault weapons ban, a ban on high-capacity magazines, a bill requiring universal background checks and included 23 executive actions that were signed by the president following the conclusion of his White House briefing.

With respect to those 23 executive orders, Gottlieb said none of those “burned us very badly, a lot of them are kind of silly and stupid, to be honest about it… Things we should have already been doing, like adding in on a faster basis criminal records and mental health data, something the SAF has been advocating for four years.”

Indeed.  A cursory review of those 23 measures suggests that they’re cosmetic, items like “Nominate an ATF director” and “Launch a national safe and responsible gun ownership campaign” seem to be more sugar than substance.

“The heavy lifting the President is giving to Congress,” continued Gottlieb.  “The assault weapons ban and the ban on high-capacity magazines – though, quite frankly, I think we can stop the AWB in Congress, it’s going to take a lot of grass roots work, but I think we can do it.” 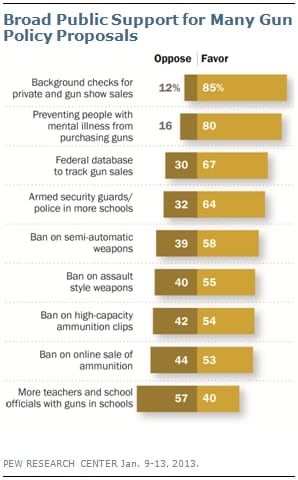 Still, there is reason to be optimistic Gottlieb argued because “at least we know where we’re at right now and grass roots gun activism is more energized than ever before.”

When asked about the closure of the inaptly named ‘gun show’ loophole or universal background checks (private sales between non-FFLs) Gottlieb’s answer reflected what appears to be the common consensus amongst gun owners.

“I’ll be honest, I don’t have a problem with background checks if they’re done right.   The problem’s been in the past where it wasn’t about ‘universal background’ checks but about universal registration.  That is, the government wants to keep the records and the data.”

He added that when it comes to this piece of legislation, the “devil is in the details.”

We also brought up what went down in New York this week, where Democratic Gov. Mario Cuomo rammed through a package of extreme gun control laws, including a measure that requires registration for all ‘assault weapons’ and a ban on magazines holding more than 7 rounds.

“Even if I was a non-gun owner in New York, I’d be infuriated by the way it was done, when you basically suspend all the rules, you do it in the dead of night, you do it in a closed room with four people, you give the other lawmakers 20 minutes to read a 39-page document and make up their minds on it, you request an immediate vote,” said Gottlieb.

“Bottom line,” Gottlieb continued, “that’s not how the democratic process works.  If you can do that to guns, you can do that to anything… And when government works that way, it reminds us all why we have a Constitutionally protected right to keep and bear arms.”

(Note: the cover photo for this article pictures Gottlieb in front of a poster advertising his ‘Gun Owners Against Illegal Mayors Campaign‘).