SIGs in the US Military

The standard sidearm for the US armed forces as everyone knows is the Beretta M9 (92F). Before 1984, it was the legendary Colt 1911 .45 (versions of which are still in use with special operations units.) However, what you may not know is that several variants of the SIG P-series pistol also serve.

What is the P-series?

contract. Using John Browning’s linkless cam short recoil action of self-loading with a double-action/single-action (DA/SA) trigger mechanism and modern production techniques and quality control, the P220 was an immediate hit. It was soon adopted by military and police forces worldwide and by the 1980s was popping up over on this side of the pond.

The double-stack magazine version, the P226, was entered into the US military’s pistol replacement competition in 1984 and fared well, only losing to the Beretta due to cost.

This was however, not the end of the SIG P-series in the US armed forces.

In the 1980s, the US Naval Special Warfare Command, the parent of the Navy SEAL teams and Special 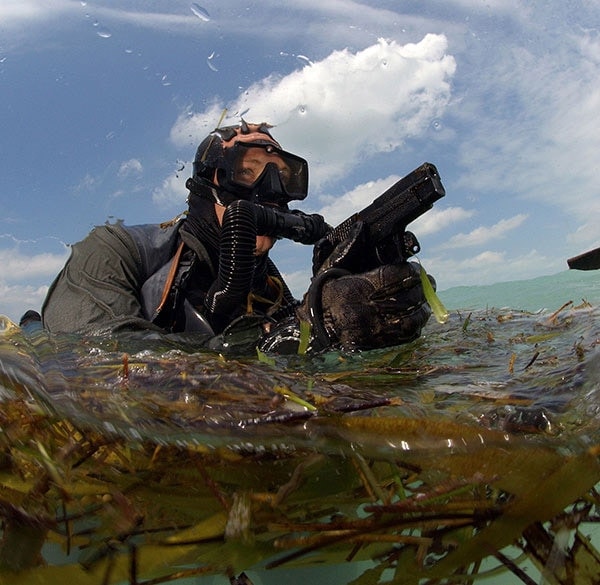 Boat Units, needed a durable and effective sidearm. These teams had used 9mm S&W M39 pistols and stainless Model 66 .357 revolvers since Vietnam and these sorely needed to be replaced. Dissatisfied with then-new M9 Beretta and enamored with the concept of the all-stainless Ziton-coated SIG handguns, the Navy ordered several P226s.

Under the USN designation of MK25, the P226s are built with a phosphate corrosion-resistant finish on internal parts, high contrast night sights and a one-piece milled rather than stamped slide with a distinctive anchor engraving. A 4.4-inch barrel led to an overall length of 7.7-inches and a 34-ounce weight. Fully loaded a standard magazine gives 15+1 rounds of 9mm to the Navy’s frogmen. Nearly twenty years later the MK25, updated with an accessory rail and night sights, still accompanies these operators. 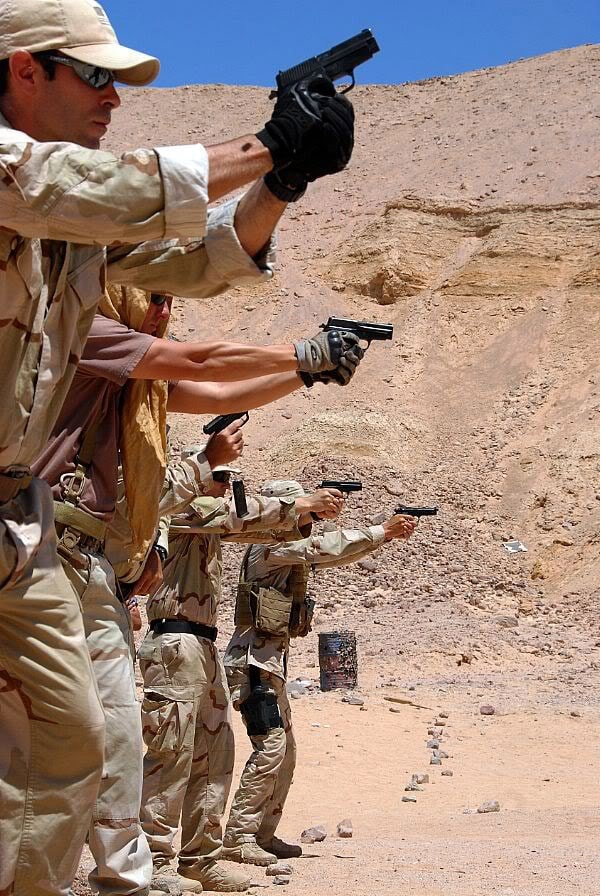 Sigs P228 M11 serves with the many Military Police.

The SIG-Sauer P228 was introduced in 1988 as a smaller, stamped-slide version of the P226. Adopted by the US Army in 1989, its military designation is the Pistol, Compact, 9mm, M11. It’s a specialist’s weapon and as such is issued to Military Police units and detectives of the Army’s Criminal Investigation Division (CID).

It has a 3.9-inch barrel and 7.09-inch overall length, making it more compact than either the Beretta M9 or Colt 1911. A double-stack magazine provides 13+1 firepower. SIG only produced the 228/M11 in NATO- standard 9mm.

Besides Uncle Sam’s MP’s, the P228 is in use with the militaries of over a dozen other countries including the UK and Sweden.  In addition, they have been spotted with NCIS, USAF OSI, and as a personal defense weapon of US Naval aviators.

Unlike many branches of the military where the typical enlisted rarely handles a weapon, Coast Guard personnel carry one on a daily basis while aboard their fleet of hundreds of small boats. Moreover, they 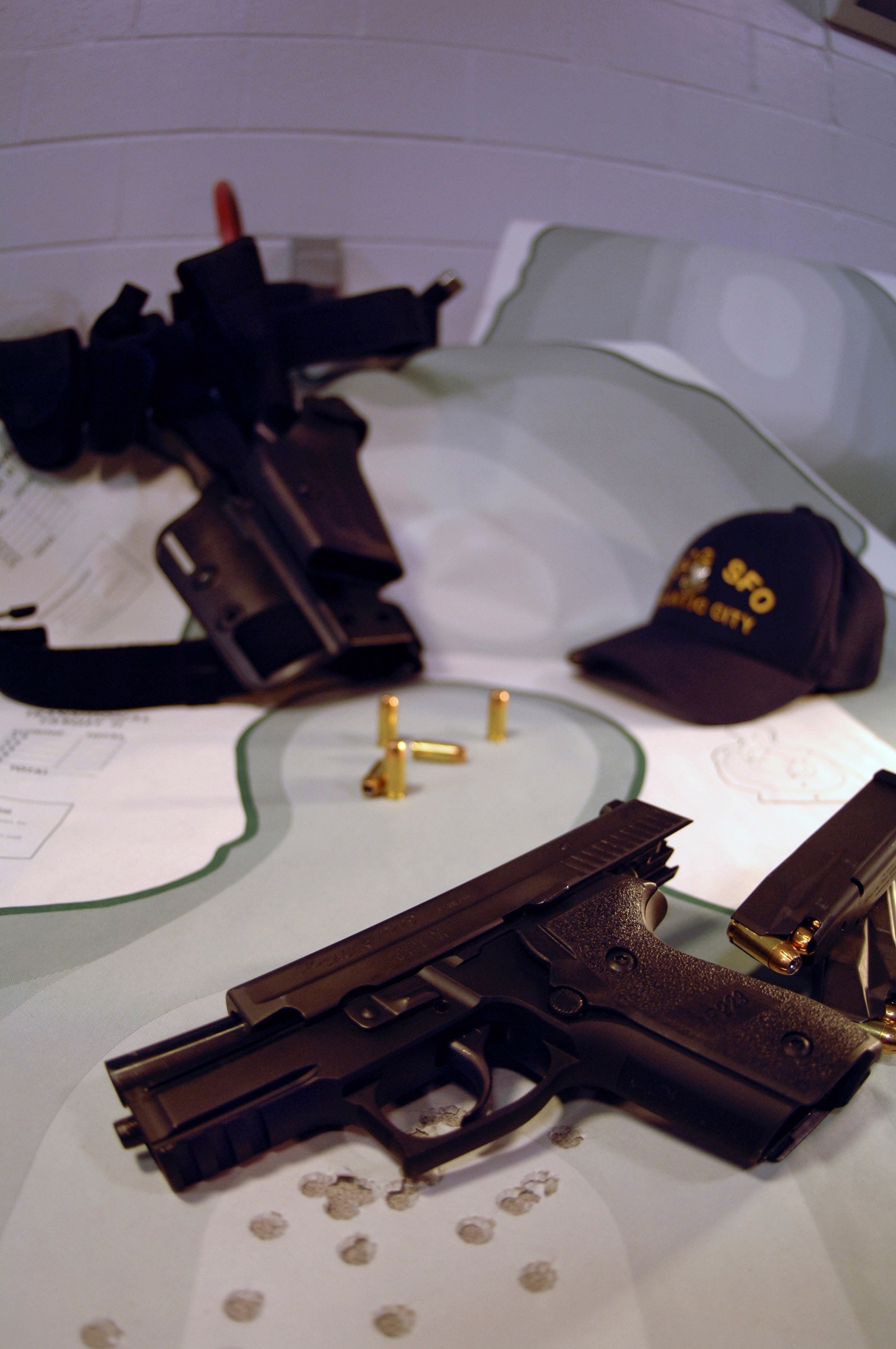 The USCG has used Sig P229s in military service.

practice, a lot. So much that by 2004, some 75% of the USCGs inventory of M9 Berettas was far past their 5,000-round service life. As part of the Department of Homeland Security, the Coast Guard was part of a testing process that examined 46 different handgun models. Nearly 3-million rounds later (it’s a dirty job but someone has to do it!), the winner was the P229.

The version of the SIG chosen was the P229R DAK, which includes an under-slide rail and the 6.5-pound DAK (Double-Action-Kellerman) trigger. A 3.8-inch barrel gives a 7.1-inch 27.5-ounce (unloaded) handgun. In its law-enforcement role, the USCG was able to choose a non-NATO standard caliber (40S&W) and use non-Geneva compliant JHP ammunition. Typical magazines are 12 round capacity flush-fit.