We think we’ve identified the trend of this year’s SHOT Show. Major manufacturers like FNH, Heckler & Koch, Smith & Wesson, just to name a few, are simply expanding already popular pistol lines with silencer-friendly features. While SIG Sauer also follows this trend in spirit, they get a gold star for going above and beyond.

Instead of simply standardizing features like a threaded barrel and optic-ready slides, SIG went ahead and introduced its own suppressor line. The SIG-SD line of silencers will fit rifles, submachine guns and pistols, and be a available in calibers .22, 9mm, 5.56mm and 7.62mm.

The company, which caters to national as well as international customers, said the demand for silencers is just there. There are more requests by military and LEO for guns that can use a suppressor because hearing loss due to action in combat theater has been growing steadily. 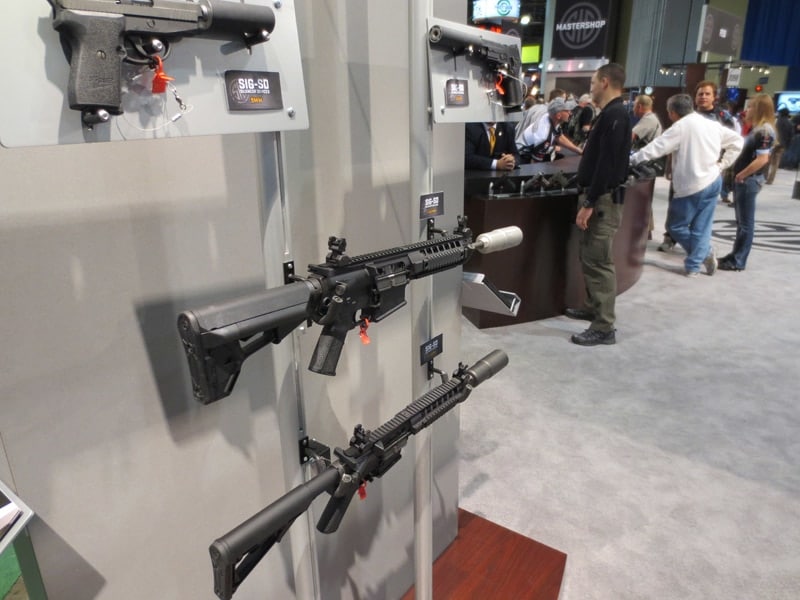 In addition, the answer is “yes” SIG does have silencer-ready models, but they’re also releasing a pistol-caliber submachine gun with essentially a fully integrated suppressor. We say that with in vague terms because the internals of the suppressor are attached to the barrel and without the actual can covering them, it just works as a muzzle brake.

The SIG MPX was built specifically for law enforcement and military community, but there will be a civilian model available as well, SIG Academy’s Adam Painchaud told Guns.com.

It has a short-stroke gas piston, just like the SIG 516, the controls will be familiar to any AR or MP5 enthusiast and it’s chambered in 9mm. Including the suppressor internals the barrel is only 16-inches long, and 9 inches of which is the muzzle brake.

The suppressor, however, is sold separately and will, of course, require the necessary paperwork and a $200 tax stamp.

Patent is still pending along with other legal obligations, which is our guess as to why there’s no official word on when either products will be available or an MSRP.