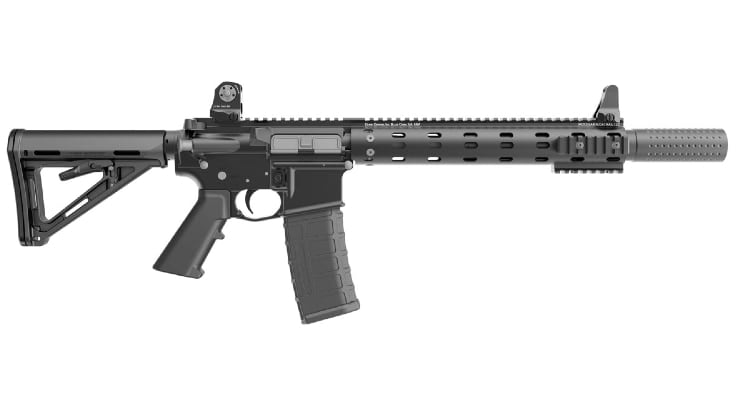 Daniel Defense dropped a 300 AAC Blackout bombshell on SHOT Show this year with their new ISR, or Integrally-suppressed rifle.

The ISR is a 300 BLK AR with a 10.3-inch barrel and a permanently attached suppressor bringing the legal barrel length up to 16 inches. Because of this, only one tax stamp is required, for the silencer, to own an ISR. This makes it a lot more approachable than other similar suppressed 300 BLK packages which require two.

Although the can is pinned and welded into place, the baffle stack can be removed through the front and is user-serviceable.

The ISR was developed specifically for commercial sales, although Daniel Defense anticipates a certain amount of interest from the military, according to the Military Times.

“The ISR takes advantage of the best characteristics of the 300 BLK round without adding weight, length or the cost of an extra tax stamp to an un-suppressed rifle of the same length,” said Jordan Hunter, Daniel Defense’s marketing director. The rifle weighs a perfect 7.62 pounds.

The ISR is built around a pistol-length gas system, of a sort. The rifle has a custom gas block that is also the suppressor mount, so the gas system essentially runs through the can. The barrel is cold hammer-forged and the can is made of stainless steel and given a salt bath nitride finish.

If not for the short section of exposed can you might mistake the ISR for any number of slick, higher-end ARs. It comes with a standard M4-type pistol grip, a Magpul MOE buttstock and PMAG, Daniel Defense fixed iron sights and their own minimalistic MFR handguard.

The handguard measures in at 12 inches and all but wraps around the suppressor. Getting hot isn’t a huge issue; even though the range we were at was cold, the number of shooters was large, and only served to make the rifle comfortably warm in the cutting breeze.

The effect the suppressor had on noise and recoil was substantial. Daniel Defense didn’t give us any numbers but did say that it was on par with some of the more popular suppressors for 300 BLK (reading between the lines: AAC SDN-6).

Availability is expected to start around April or May, with the MSRP set at $3,200. Even if you wind up paying full price, with these features and minus one tax stamp, we think it’s pretty competitive.

The only reason to not want this rifle is if you want the option of being able to remove your silencer for a more compact gun. But we think the efficiency of this design may just prove to be a lot more appealing to most people.