When I got to Heckler & Koch’s booth at SHOT Show their crew was on edge. Clearly, people were angry, trying to keep cool and stay professional. “Did you see which direction he went?” someone asked.

Even at SHOT Show, people can be assholes. Someone swiped an optic.

“It wasn’t tied on. I would have stolen it. That was an expensive scope,” Mike Cabrera of Hekcler & Koch’s  Law Enforcement Sales told me. Cabrera told us a lot more, too.

HK’s been busy updating and improving their guns, expanding on their most popular models with updated variants for the commercial and law enforcement and military markets. Cabrera was quick to talk about their new HK45 Tactical and HK416 rifle, which we had the pleasure to shoot at the range earlier this week.

The HK45 Tactical is a staggered-stack .45 ACP handgun designed to be suppressed. It comes with an extended, threaded barrel and raised night sights. While not a small gun by any means, the standard grip size is surprisingly comfortable and the controls are easy to reach. It does have interchangeable backstraps for smaller or larger palmswells. The texture on them is aggressive but not irritating. We had no problems shooting the gun, fast or slow, even with our frosty hands or with gloves on.

Also, the standard DA/SA safety/decocker trigger was light, predictable and responsive. There are many other trigger options available for these pistols, something for everyone.

The sights were easy to use, the gun handled well… there’s a reason there are many H&K fans out there. With the extended barrel, even if you don’t plan on using with a can, the extra velocity gained means even harder-hitting .45s.

The black Tactical will be a permanent addition to the HK catalog, however, the tan and green models will be limited production runs. Get yours now if you want one.

The HK416 was just as fun to shoot, if still an AR variant. HK has made many changes large and small the the rifle that make it a lot more appealing.

It is still at its heart the same short-stroke piston-operated rifle, but you’ll be hard-pressed to find anyone who objects to the changes. First and foremost is a new magazine well that works with a wider array of magazines. The previous magwell was designed for USGI mags and it didn’t work with PMAGs and other popular polymer magazines.

The problem was enough of a deal that it was part of Magpul’s redesigned Gen M3 PMAG, and the Marines’ decision to prohibit the use of non-USGI magazines.

The new magwell is about the same as a standard M4 magwell, so it should have no problems with aftermarket magazines.

It also has redesigned integral flip-up iron sights that, when not deployed, stay recessed inside the railed handguard. The selector and magazine release have been tweaked with new ambidextrous controls.

It will also be available in a wider selection of barrel lengths, with a 12-inch version specifically to meet the  demands of law enforcement and special forces.

We have a lot more in-depth footage of these guns so stick around; even if you’re not an H&K fan, you’ll like what you see. 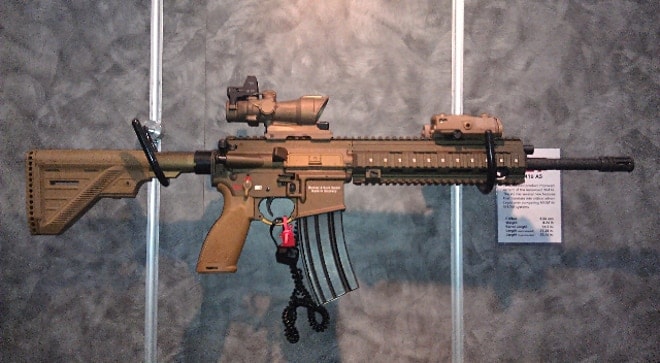