Every year SHOT Show has a day set aside for firearm publications like Guns.com so we have the opportunity to test and shoot new guns of the year and in turn deliver articles like this. While we visited all the major manufacturers and saw certain products that are sure to sell, it was a surprise to see Cabot Guns there. We say “surprise” because, well, the Pennsylvania company makes high-end 1911s — ones you’d think would become mantle pieces, or stowed permanently behind glass, not ones you’d think to shoot. However, Cabot’s are built to be shot, and shot they were.

While the process of driving a Ferrari is the same as driving my ’97 Mazda B2300 with 300K miles on it (you got your clutch, shifter, steering wheel), it’s a totally different experience. The same can be said for Cabot. In the ocean of 1911 handguns, Cabot stands out.

Most companies market, along with the gun, how it’s made and, truth be told, it gets a bit redundant. We don’t know if it’s pride, or if the men and women of Cabot are just really excited about their products, but Cabot lays out in great detail and length how their guns are made. 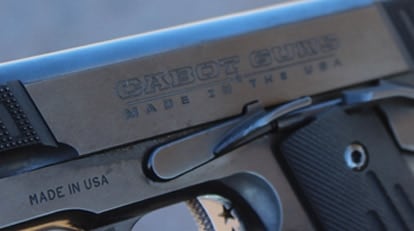 Cabot only uses materials that come from the U.S. The slide to frame fitting was impeccable. The smoothest the author has seen.

The company said in its catalog that it operates under the idea that “how you build something changes the essence of how it works” and Guns.com is happy to corroborate with that statement.

Cabot uses manufacturing jargon to describe the process in which it produces its gun, which is called Clone Technology. This is a more timely, yet, personable approach to manufacturing an item. Essentially the process produces parts that fit better together with lower tolerances, as well as ensuring every component is identical and will deliver the same performance shot after shot.

Instead of machining the major components, Cabot uses a CNC Grinding machine that removes smaller increments of material at a time. This process is more controlled for a more accurate cut. Basically a damn near perfect slide to frame fitting.

Cabot also utilizes a technique called Electric Discharge Machining, a process that removes metal by arcing electricity from an electrode to the machined part at a microscopic level. So again, small, small cuts. This process does not impose any residual stresses or micro cracking in the metal.

Let’s not forget, appearance and presentation is an important quality to Cabot. In addition to the guns being carefully manufactured, many of them are also works of art.

The American Joe, the newest addition to Cabot’s 1911s, was the commissioned design by Joe Faris, an American rock star clothing designer from Detroit. Cabot said the American Joe is meant to be a symbol of “American exceptionalism,” and explains:

The tire tread “USA” depicts the speed of the bullet leaving the barrel as well as the Detroit Automotive innovative spirit, which is at the heart of America. The wings embody a burst of freedom as the tire peels out transforming into a web pattern that represents the strength and resilience of Americans. A spider’s web is one of the most complex patterns in nature and is broken-down everyday, but built back up every night.  In America we continue to build just as our forefathers did for generations. The American Flag handgrip represents the strength as the hand wraps around the magazine with fortitude and resilience. 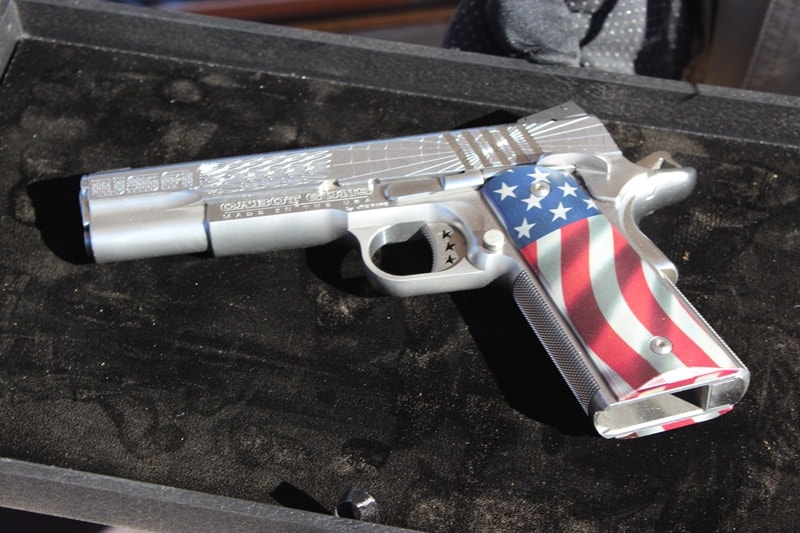 Cabot was perhaps the proudest company attending Media Day during the 2013 SHOT Show. Rather than just placing their products on a card table, Cabot was the only company that had a velvet covered display tray.

Dinging metal plates with a Cabot is a fond memory of that day. It stand out among the hundred or so guns we shot, and that says something.