How Gun Lube Brought Down the British Empire

In 1857 colonial India, the British East India Company was an enormous publicly traded private corporation that literally controlled the country. They equipped and had under their control a large army, minted their own money, and oversaw all imports and exports to the subcontinent. The local millions of inhabitants of the area we know now as India, Pakistan, Nepal, and Burma, however, were not really in love with the concept but the spark that ignited a bloody war and spelled the doom of the company came from the type of gun lube used at the time.

India was, and still is in many ways, a country of many diverse people carefully separated by caste, religion, language, and custom but the two largest religious groups in British colonial India were Hindu 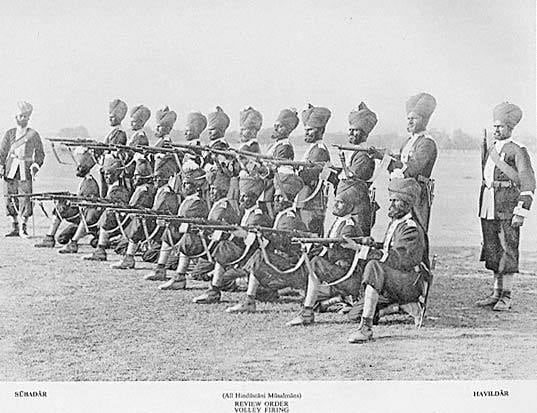 and Moslem. While European officers, early private military contractors, led and filled specialist roles in the East India Company’s Army, it was these two groups that made up the majority of the rank and file. These local soldiers were called sepoys after a Persian word meaning soldier.

While this army had been formed and serving for over a hundred years under the Company’s direction, by 1857 the morale of the sepoys was at an all-time low. The year before the sepoys had, under the General Services Enlistment Act of 1856, been made liable for service not only in other parts of the colony but overseas instead of restricted to local use.

This redefining of their duties left many enlists suspicious of the intentions of their employers and their suspicions began to turn to hostility when it first was introduced that the turban cockades (i.e. military insignia) these units carried were made of unidentified leather, which Muslims feared was pig and Hindus feared was cow.

Then they found out the ingredients used in the lube on their bullets. 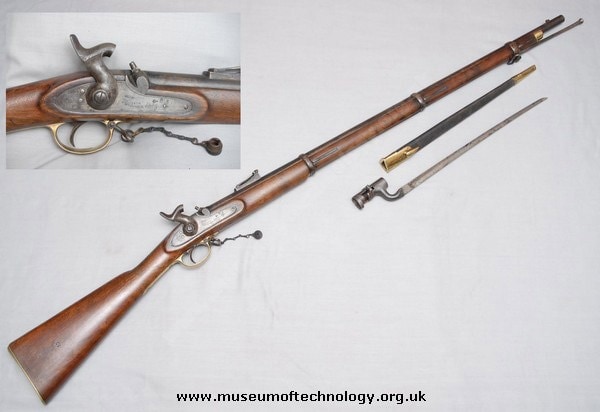 a good design for a flintlock musket but was inaccurate at any range more than a football field. Just a few years before the British Army had adopted the thoroughly modern Enfield Pattern 1853 rifled musket. Percussion fired with a rifled barrel, the Enfield could be loaded faster and a tight-fitting pointed bullet rather than a loose ball as in the Brown Bess. This allowed the gun greatly increased range and accuracy.

Unlike the French and American minie ball bullet that had grease grooves cast into it to carry lubrication down the barrel, the Enfield used a strip of greased paper to help guide it into place down the length of the barrel. The 530-grain bullet was issued in the Metford-Pritchitt cartridge that included a thick paper tube that held the round and the 68-grains of black powder to propel it. The whole affair was thickly greased with a coating of animal fat and wax to both seal and waterproof.

To load the new rifle with these cartridges, the standard drill in the British Army was to rip the end off with the soldier’s teeth, pour the powder down the muzzleloader’s barrel, and then push in the grease paper wrapped bullet down on top.

When the sepoys began training with these rounds with their shiny new Company owned rifles, the grease left a bad aftertaste in their mouth, one they had not tasted before. The Hindu troops discussed it amongst themselves and feared that it was beef tallow, fat of the sacred cow. The Muslim troops came to 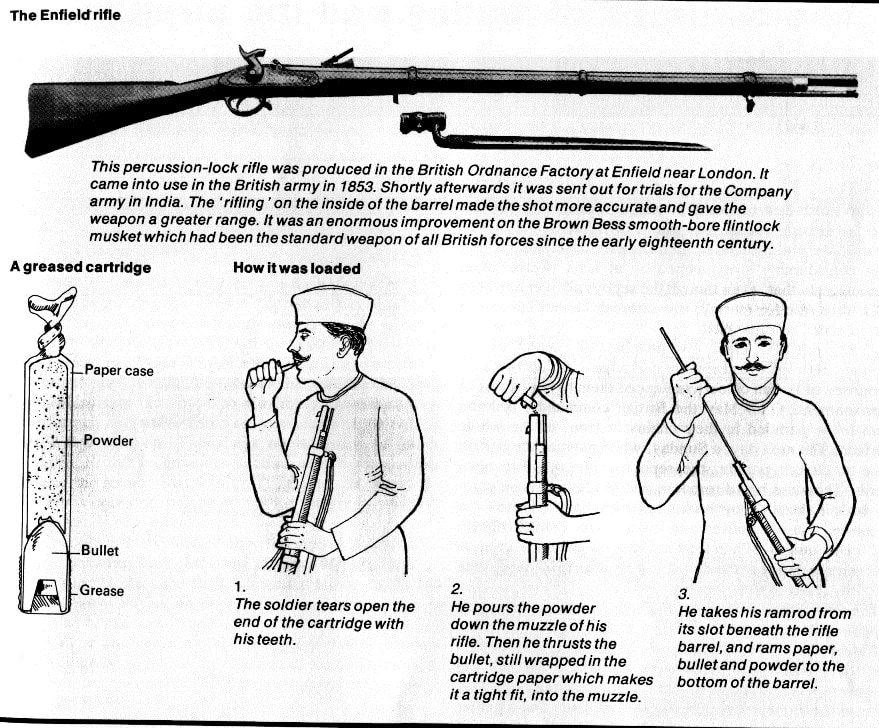 Instructions to Sepoys on how to load their Enfield rifles.

the accurate conclusion that the grease was rendered from the forbidden pig. At a minimum, this was less than ideal, and some of the more strictly religious in these units felt that ingesting such ideological contraband could damn their mortal souls for eternity.

When officers were asked and Company officials consulted as to what the lube was for the record, their fears were confirmed. Some cartridges made both in Britain and in India were in fact sealed with beef tallow, others were done with rendered hog fat, and still others with the divinely inoffensive sheep, but no one could tell which was which.

Hoping to address the problem quickly, the Company sent out an order that sepoys should tear the cartridge open with their fingers, but instead this confirmed to the soldiers by default that the bullets issued were coated with the sacrilegious fat. The order led to a refusal by men in some of these units to use the new rifle and in turn led the Company to label this group ‘mutineers’ and dragging them off to stockade.

The imprisonment of Hindu and Muslim soldiers over their refusal to use the offending rounds led to rebellions in almost every Hindu and Muslim regiment in the Company’s Army. Known as the War of Independence in India and as the Sepoy Mutiny in the West, the engagement ran for almost three years and cost the lives of hundreds of soldiers and civilians on both sides.

The results of the mutiny

Though the rebellion was put down, the engagement ended the East India Company’s tenure as a military 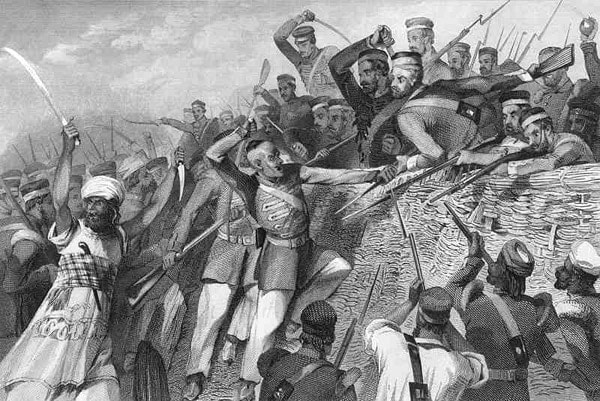 Depiction of the spread of the Indian Rebellion of 1857.

force. The company itself was nationalized and the British government assumed its operations in India the next year. This spelled the end of the megacorporation and in 1874, it was dissolved.

A new army, built around special units of the Sikhs, Jats, Pathans and Gurkhas minority was developed in India and the government led army, just to be on the safe side, increased the numbers of European soldiers, forbidding all-Indian artillery units.

Moreover, the gun cartridges issued to non-European were carefully made in India with vegetable-based lube.

Nobody except my kids have a religious bias against veggies.