Blackhawk’s gear is getting to be legendary.  Blackhawk is part of a much larger conglomerate: The ATK Sporting Group.  This size allows for rapid innovation, quick adaptation, and complete market saturation.

Take their holsters, for example.  The Serpa Holster has it’s share of fans and detractors.  Fans like the secure locking mechanism that holds a gun in place through any sort of jarring bumps. 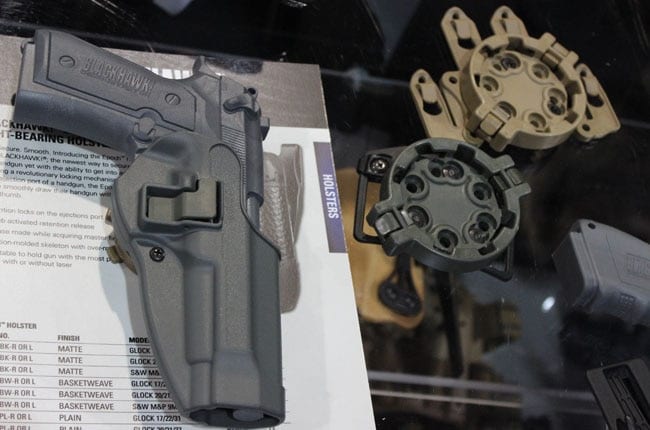 The detractors point at what they perceive to be a design flaw.  The lock is disengaged with the trigger finger, and, in some situations, the force needed to disengage the lock will follow through during the draw and this finger will then be on the trigger, which might make the gun go.  People can’t decide if this is truly a design flaw, or user-error.

That said, the chances of accidents are slim, and the holster still has a  devoted following.  So Blackhawk keeps innovating with the Serpa.  They now have a system that allows for the holster to be mounted to almost anything.  Under the dash, under a desk, or back on your belt.

And for those who want another option, Blackhawk has now unveiled a thumb break system that will rival the ALS holsters of Safariland.  The new holsters, which will be available in leather and nylon, use their “Master Grip” concept.  As the grip is engaged, the shooter’s thumb will hit a small paddle that will release the lock.

The GripBreak Seems to have achieved this balance, which is big news.  We’ll have on in to test, soon, and we’ll let you know.

The rest of their gear is great, too.  While they make gear that looks tactical, they also make tactical ready gear that looks less conspicuous.  This is true for their bags, and shoes, and clothes.  Check them out.