Of all the new guns and gear coming out of SHOT Show, the most unique and truly innovative product of all was Tracking Point.

It’s a concept that’s been relative to fighter jet “lock and launch” technology and science fiction stories for some time now. Tracking Point allows the shooter to digitally pre-determine the precise point of impact from 1,200 yards away before ever pulling the trigger.

the system is designed to increase first shot success probability for shooters with little to no experience. It isn’t so much a scope as it is an entire firearms system formally known as XactSystems, and virtually removes the necessity for all basic shooting techniques like breathing control and trigger control.

How it works is the triggerman first needs to put his or her sights on target and then tag it by hitting a button beside the trigger on the trigger guard. This step literally tags the shot impact point on the target in the scope with a red dot. While keeping the sights near the target after it’s been tagged, the shooter will then depress the trigger and hold it. The gun will NOT fire until the reticle re-aligns with the tag, and in that split second when they do line up, a round discharges.

The Tracking Point system consists of a Guided Trigger and a Networked Tracking Scope, and will be available for three different rifle/caliber configuration. 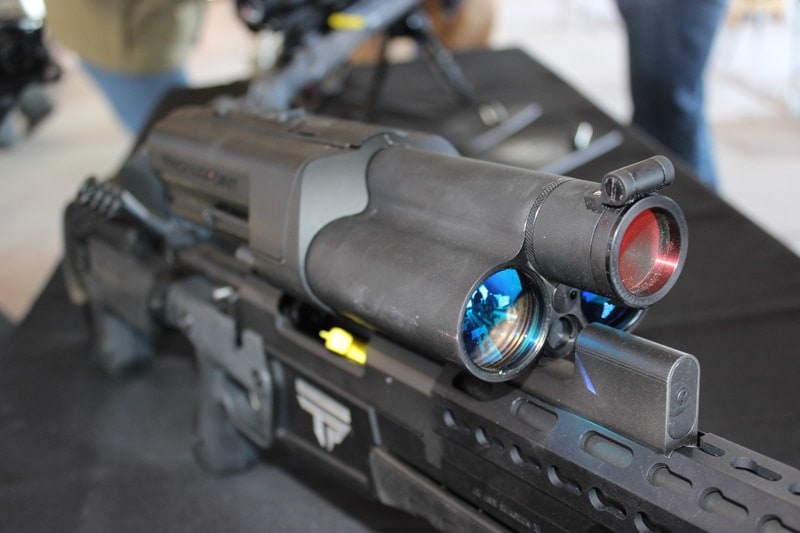 Once the target is tagged, or in other words the target is locked, the shooter pulls and holds the trigger. The Guided Trigger arms the system telling the rifle that you want to fire. At this point in the process the Networked Tracking Scope then controls the trigger weight, deferring it until you get the reticle on the pre-determined point of impact within the target. In the end it doesn’t matter if you jerk or squeeze the trigger because the system manages the task for you.

The heart of the system, though, is the NTS, which performs a handful of tasks. The scope adjusts for distance, weather, environment, wind and light. It mounts to a Picatinny rail attached to the rifle and is hardwired to the Guided Trigger.

The NTS also has a WiFi server, so you can save and/or stream the system — actual video — in action to a smartphone or tablet. It allows a spotter to assist via manual changes, or aid the shooter in perfecting his or her shooting skills.

And, according to the catalog, the systems come already zeroed, so you don’t have to go through the process of entering data and whatnot.

Right now the Tracking Point system is marketed to hunters and long distance shooters, but the first thing Guns.com thought of was military or law enforcement applications. As you can imagine the system is expensive — the company’s CEO John McHale told Guns.com probably around $20,000 — so we’ll see who gets it first.

Meanwhile, McHale also told Guns.com that they’re thinking of maybe holding a contest of some sort later this year. Try to invite some of the best shooters out, equipped with their own gear, and try to out score the Tracking Point system.

Amid all the new products introduced at SHOT Show 2013, Tracking Point was the belle of the ball in terms of real, true innovation.