Dr. Martin Luther King Jr. is best known as a man of profound peace, who applied Gandhi’s teachings of non-violent direct action to the plight of oppressed blacks in America and set the stage for the Civil Rights movement.  It then may come as a surprise to some that the Reverend King, in keeping in line with Gandhi, believed strongly in the human right to self-defense and had even applied for a handgun carry permit after his house had been bombed to defend his family from the bigoted minds of that era.  He was denied.

Most people think King would be the last person to own a gun. Yet in the 1956, as the civil rights movement heated up, King turned to firearms for self-protection and he even applied for a permit to carry a concealed weapon.

This was not out of the norm for Civil Rights organizers in the 1950s and 60s, nor was it the only weapon King kept around him.  On the receiving end of countless death threats from both civilians and law enforcement, armed supporters took turns guarding King’s home and family after his permit was denied knowing too well that the Klan was targeting him for assassination and they would likely receive little assistance from the local authorities.

Indeed William Worthy, a black journalist who covered King in the 1950s, reported that he once went to sit down on an armchair in the King’s living room and almost sat on a loaded gun. King’s advisor Glenn Smiley described the great pacifist’s home as containing “an arsenal.” 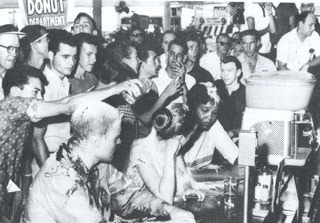 John Salter is attacked at a sit-in protest in Mississippi.

T.R.M. Howard, the Mississippi doctor and founder of the Regional Council of Negro Leadership, kept a Thompson submachine gun at the foot of his bed and escorted those affected by hate to and from their homes in a heavily-armed caravans.  Likewise, white sit in organizer John R. Salter, always “traveled armed” while working in the South in the 50s, once said, “I’m alive today because of the Second Amendment and the natural right to keep and bear arms.”

Stories like these remind us today that even though these great minds preached peace and tolerance, they recognized the intimate connection between gun rights and human rights and the danger the oppression of one meant to the other.

Though provisions mandating gun protocol for all Americans had existed since the colonial era, the first actual piece of gun control written in this country was targeted at blacks and keeping them unarmed. Though it would be hard to argue that all gun control is racist, it’s difficult to deny that its roots here in North America are in subjugation, a reality not lost on the thought-shapers of the Civil Rights era.

So on this day reserved for the memory of Martin Luther King Jr., Guns.com would like to encourage all of our readers to take a minute remember Dr. King as a man who did more than just pray for peace (he lived it), but was still prepared for war.