Aimpoint building live-fire virtual range in the US 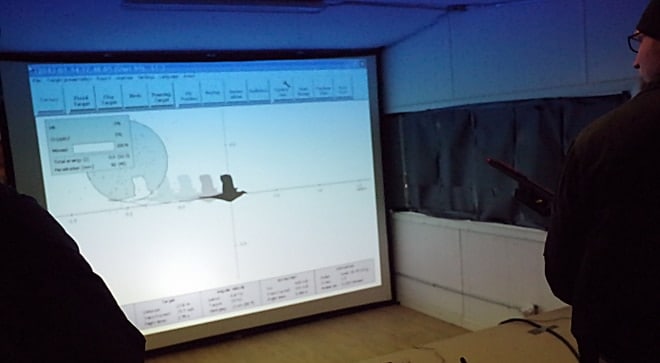 Aimpoint is working on a virtual range—a live-fire cinema—here in the U.S. They hope to open it this year, and the location has not yet been disclosed. That being said, we’re sure people will travel to spend a day or two at this particular theater.

When we arrived at SHOT Show’s Media Day at the Range, the first booth through the gate was Aimpoint. This was a bit unusual in that it was a virtual shooting range, surrounded by actual shooting ranges, making bullet noises.

Inside was a handful of laptops, a dummy shotgun and a projector. The shotgun was fit with an Aimpoint optic, naturally, and used some type of optical or laser tracking system… I honestly was a little distracted by the lure of shooting real guns just outside the projector room.

The system could be loaded with any number of shooting scenarios and they had scores, from basic shooting skills like virtual clays to more and more difficult hunting scenarios for small, medium and large game, beast and foul alike.

The system tracked your shooting from the instant the scenario started, allowing you to replay, in slow-motion, your shooting, complete with tracking speeds and a host of numerical data to help you perfect your skills in a way that shooting real guns simply would not be possible.

In truth, as a teaching tool, no matter what your level of skill or expertise, Aimpoint’s shooting sim can and will help you improve your abilities.

I asked how much the program cost, and the Aimpoint rep counted off on his fingers, doing the conversion to dollars, “Five hundred.” We looked at each other and commented that the price is reasonable and likened it to a high-end video game console. He looked confused, ran the numbers through his head a second time, “Oh, no, five thousand! This is not something we expect individuals to purchase. Shooting clubs, yes.”

But in truth, even $5,000 isn’t a huge amount of money when you consider the cost of ammo and long-term training. We suspect Aimpoint will be surprised at how many of these they wind up selling to everyday consumers.

Still, their virtual hunting range with their virtual (and recoil-free) gun pales in comparison with the training center they are working on somewhere in the U.S. Aimpoint is working on a live-fire version for hunting education that will allow shooters to use their own real guns and ammo to practice on virtual game.

Hunters in groups of up to four will be allowed to practice in a massive shooting cinema with video of whatever particular scenario they load up projected on giant curtains. The hunters and their gear is tracked, making the range interactive; it will respond realistically.

The shooting cinema will include a traditional shooting range for function-checking guns as well as sighting in any optics—something tells us Aimpoint glass will be for sale at this facility.

Like with the mini-virtual range, Aimpoint’s shooting cinema will deliver all types of hunting scenarios, for beginners and old hands alike, including shoot/no-shoot scenarios to practice, above all, safety. The scenarios run about an hour and a half and will involve quite a bit of shooting. They’re going to concentrate a lot of hunting into each scenario.

I asked if they were interested in tactical shooting scenarios and they’re not. Aimpoint’s focus is to work with outdoorsmen and the state to provide hunting education—although they have considered including some scenarios for local law enforcement.

The live-fire cinema is expected to open later this year, and we can’t wait to try it out. They will be running the first cinema through a subsidiary and expect to set up more around the country, with the possibility of setting up franchised locations.

We really can see people buying the mini-ranges for (long term) low-cost shooting practice, but at the same time, we’ll be at the front of the line to try the full-size live-fire version, wherever it happens to be, whenever it happens to open.