There’s an Associated Press article being syndicated by every major news publication that seems to validate the notion that New York City’s draconian gun laws have led to a reduction in crime in the big apple.

In his nationwide effort for tighter gun control, Mayor Michael Bloomberg attributes historic crime lows in New York to strict gun laws that are strictly enforced. “If we are serious about protecting lives,” he wrote in a recent newspaper editorial, “we have to get serious about enforcing our laws.”

The National Rifle Association has dismissed Bloomberg’s anti-gun campaign over the years as a publicity stunt and said last week that tighter laws would have no effect on public safety and crime.

But leading criminologists around the country say Bloomberg is right, for the most part. While acknowledging policing isn’t the only factor in reducing gun violence, they cite the all-time low number of slayings in a city where most people are killed with guns.

To start with the obvious, the operative phrase in those paragraphs is “for the most part.”  Well, as it turns out, one can argue that the author of the piece is bending the truth – for the most part – because when one actually looks at what the experts said it doesn’t appear that there is a consensus on what caused the drop in crime.

Though, before one examines the experts’ remarks, one should consider this valid point made by NRA spokesman Andrew Arulanandam, who argued that crime has been decreasing in cities across the country for decades, irrespective of gun laws.

“I think if you look at the overall violent crime rate that the FBI rate disseminates annually, it’s been decreasing steadily nationwide over the last few decades,” Arulanandam told the AP. “And simultaneously, this is the narrative, the last few decades more people have been purchasing firearms.”

Indeed.  The question then becomes, did New York City’s crime stats drop at a disproportionately high rate when compared to other U.S. cities or the overall national average?

It’s rather unclear as to whether that’s the case (see property crime graph). 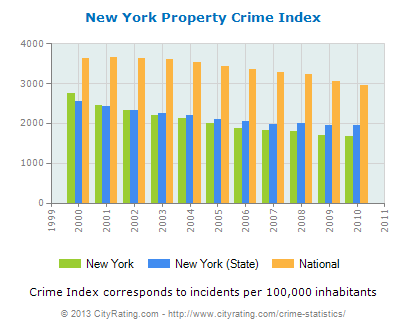 Now, to turn to the experts, one is struck by what Columbia University law professor and criminologist Jeffrey Fagan had to say about Bloomberg’s efforts to curtail gun-related violence, which includes his controversial and constitutionally dubious stop-and-frisk initiative.

Essentially, Prof. Fagan speaks to the point that while the murder rate has dropped in NYC, the number of shootings has remained relatively constant over Bloomberg’s three terms in office (2012 was an outlier, with only 1,600 shootings as opposed to 1,800 which appears to be the norm).

“The murder rate goes down, and shootings are stable, so there is also a question of whether medical care has improved,” Fagan told the AP

This fact is something that Guns.com has reported on in the past, citing these statistics from DNAinfo.com:

The skyrocketing numbers of NYPD stop-and-frisks had little impact on the number of people shot in New York City or on gun violence in general during Mayor Michael Bloomberg’s administration, a DNAinfo.com New York analysis of crime data has found.

While the NYPD was stopping and frisking a record 685,724 people last year [2011], 1,821 people were victims of gunfire, according to NYPD and city statistics. That’s virtually the same number as in 2002, Bloomberg’s first year in office, when 1,892 people were shot, but just 97,296 people were frisked.

Fagan, who is keenly aware of these stats, told the AP, “I endorse Bloomberg’s campaign to end gun violence.  I just wish it were more successful than it is.”

Yes, to clarify, of those 685,000 stops in 2011, only about 770 guns were recovered, which means that about one tenth of one percent of all stops result in the seizure of a gun, as WNYC reported.

In other words, it’s highly ineffective at taking guns off the street.

Now, what the experts seem to endorse is not gun control in the sense of keeping guns out of the hands of law-abiding citizens per se, but harsh penalties for those who violate the law.

Harold Pollack, co-director of the University of Chicago Crime Lab, brought up the Plaxico Burress incident, where the former New York Giant brought a loaded firearm into a nightclub.  The handgun accidentally went off, hitting him in the leg.  Burress would spend more than two years in prison as a result of the incident.

“That’s a deterrent,” Pollack told the AP. “You want to create a deterrent for carrying a gun, you prosecute someone who didn’t injure anyone else. A celebrity, no less.”

UCLA professor Mark Kleiman backed up the idea, suggesting that harsh penalties for gun offenders is a reason for the decline in crime.

“There are clear consequences for having an illegal gun,” he told the AP.

Although the Burress case is a bit controversial (he had no criminal history), most gun owners support tougher penalties for individuals who use guns during the commission of a crime.  As mentioned, this is not really ‘gun control’ but common sense crime fighting.

Obviously, Bloomberg’s gone to the extreme (virtually banning concealed carry for regular, law-abiding citizens) and doubling down on the failed stop-and-frisk campaign, while also taking positive steps toward reducing crime like cracking down on gun offenders with mandatory minimum sentencing.

The point is simply this: (a) the AP article was misleading, experts aren’t explicitly endorsing gun control (again, in terms of restricting the rights of law-abiding) and (b) we can’t get confused about what reduces crime.  We know that gun control – as in restricting the Second Amendment rights of law-abiding citizens – does not work.  What might work?  Throwing the book at criminals who use guns during the commission of a crime — that seems to be what the experts are telling us, for the most part.