The average American shooter usually hasn’t heard much about Konus.  The Italian company has been making scopes, microscopes, binoculars, the typical assortment of related optical equipment for 30 years or so, but their rifle scopes were introduced to the US market in 2006.  And the scopes have received good reviews.

And they’re expanding.  Konus is launching a more robust tactical line that will certainly help secure their share of the American market.  Konus’s scopes are built well, affordable, and backed by a lifetime replacement guarantee.  What’s not to like?

I had a chance to get my hands on the full Konus line at the SHOT Show last week, and I liked what I saw.  We’ve put in our request for a couple of scopes and will have a full on evaluation when they come in.  There’s just so much you can tell about an optic when you’re standing on a convention floor, holding it like a telescope.  But I didn’t have any complaints.

My favorite was the KonusPro T30.   The T30 has a 30mm, one-piece tube and a compact design. The 3X-9X40mm uses Konus’s “275 ballistic reticle” which is calibrated out to 275 yards, which is ideal for most AR platforms.

The reticle is designed to “take the guess work out of hold over angles” and the “lateral hash marks allow for precise leads of moving targets as well as compensating for strong crosswinds.” 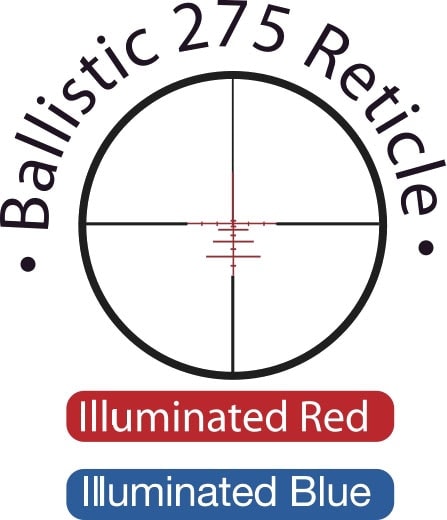 What truly sets the Konus scopes apart is that the reticle is engraved on the glass.  No wire cross-hairs.  The company boasts that the glass is unbreakable.  And the T30’s reticle can be illuminated, red or blue.

They have a similar scope, the 3X-12X44mm that offers a bit more magnification, and gathers just a bit more light in the slightly larger front lens.

For shooters who are looking for a tactically minded scope that offers much more in terms of long distance shooting, Konus has the KonusPro M-30 series of scopes.  The M-30 line has almost every permutation a precision shooter might want.

With the M-30 line for long range accuracy, and the T30 scopes for close to medium range shots, Konus has it covered.  Now if they only had a solid red dot for close quarter….

For shooters who are looking for less magnification and more immediate target acquisition, Konus is rolling out the SightPro.  This is a tactical red dot with four interchangeable reticle patterns that can be illuminated in either red or green.  The optic has five variable power intensities. The mount on the SightPro does double duty.  It can attach to either a picatinny rail or a 3/8 rail, common on many .22LRs.  This optic feels well built.  The knurled rings around the glass feel a bit more solid that some similar optics.

And that’s where the Konus SightPro is going to find a niche.  When compared to similar optics, the Konus is much less expensive.  The SightPro has an MSRP of $219.  Even if it sells at $200, it will appeal to a wide variety of budget minded shooters.

Again, I’m going back to their guarantee.  Lifetime replacement.  If you experience any issues with the optic (not your abuse of the optic, mind you), Konus will replace it.  They’re not offering to fix it, but replace it.  There doesn’t seem to be much risk.

We’ll have a couple of these in soon, and we’re going to put them to the test.  We’ll see just how well they stand up.