In a provocative essay entitled “Guns” King shares his personal thoughts on the issue and, in the process, calls out Second Amendment advocates and the National Rifle Association.

“In the wake of the Sandy Hook shootings,” King wrote, “gun advocates have to ask themselves if their zeal to protect even the outer limits of gun ownership have anything to do with preserving the Second Amendment as a whole, or if it’s just a stubborn desire to hold onto what they have, and to hell with the collateral damage.”

“I have nothing against gun owners, sport shooters, or hunters,” King continued, but “how many have to die before we will give up these dangerous toys? Do the murders have to be in the mall where you shop? In your own neighborhood? In your own family?”

In other words, it seems that King is implying, like other writers have (Adam Gopnik of the New Yorker), that law-abiding gun owners who value their Second Amendment rights are complicit in the brutal murder of those 20 elementary school children at Sandy Hook.

Obviously, one doesn’t need explain how specious that argument is, but perhaps it’s worth pointing out that the tragedy at Sandy Hook was the work of a lone gunman, who broke upwards of 40 gun laws in murdering those children.

The question gun owners are asking themselves is not necessarily about preserving the right to keep and bear arms but: are gun control advocates really naïve enough to believe that one more law or gun ban would have stopped that sociopath from killing?

Evidently King, a longtime Democrat and self-described gun owner, believes that the following laws, which he calls “a trio of reasonable measures to curb gun violence” would make a difference (it’s no coincidence that these are, point for point, the measures president Obama presented in his gun control plan last week):

2. Ban the sale of clips and magazines containing more than ten rounds.

3. Ban the sale of assault weapons such as the Bushmaster and the AR-15.

It should also be noted, that on record, even the staunchest gun control supporters conceded that these measures would not have stopped the mass shooting in Newtown.

Consider NYC Mayor Michael Bloomberg’s response to Sen. Marco Rubio statement in which the Florida Republican said, “Nothing the president is proposing would have stopped the massacre at Sandy Hook.”

“That’s probably true,” Bloomberg admitted. “But that doesn’t mean that having fewer guns around isn’t a better idea.” 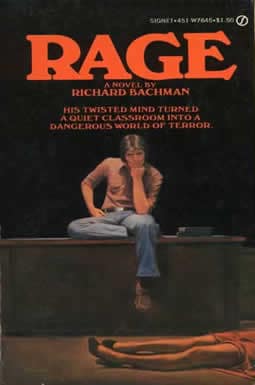 Well, for one, that is true.  The shooter stole his mother’s AR-15 (which was actually banned under CT law, but was grandfathered in) to kill those children.

And to refute Bloomberg’s latter point, with 300 million guns in this country and with an emerging black market on the Internet, criminals and killers have no problems getting their hands on firearms or high-capacity magazines (even if there was an outright ban on both, they’d still be readily available).  Hence, the notion of fewer guns as a way to stop criminals is a fallacy.

King seems to be blind to these realities.  And in lieu of acknowledging them, he turns his ire and rather craven imagination toward the nation’s gun lobby, the NRA.

“One only wishes Wayne LaPierre and his NRA board of directors could be drafted to some of these [violent] scenes, where they would be required to put on booties and rubber gloves and help clean up the blood, the brains, and the chunks of intestine still containing the poor wads of half-digested food that were some innocent bystander’s last meal.”

Really?  King’s always had a love for the macabre, but given this context, a mass shooting at an elementary school, this seems like a truly perverted desire.  One would think that no one – regardless of his/her politics or position on gun control – would wish for another tragedy of this magnitude so that a “lesson could be taught to gun rights activists” (again, it circles back to the idea that gun owners are, in part, responsible for the murder of those children).

Moreover, the NRA is the one organization that has proposed a plan (its SHIELD Program) that would actually give students and teachers a fighting chance against a deranged attacker.  This is something that King fails to see (as a former teacher and current gun owner, one would imagine he’d embrace the SHIELD Program).

After discussing how he pulled his book “Rage” from publication (a book about a student who shoots his algebra teacher and takes his class hostage) upon learning that several teens in the 1980s used his book as inspiration to carry out similar acts, King concludes his essay with a plea to gun owners.

I didn’t pull Rage from publication because the law demanded it; I was protected under the First Amendment and the law couldn’t demand it. I pulled it because in my judgment it might be hurting people, and that made it the responsible thing to do. Assault weapons will remain readily available to crazy people until the powerful pro-gun forces in this country decide to do a similar turnaround. They must accept responsibility, recognizing that responsibility is not the same as culpability. They need to say, “We support these measures not because the law demands we support them, but because it’s the sensible thing.”

Until that happens, shooting sprees will continue.

King’s right about one thing: we need to take responsibility for the safety of our children.

To that end, we can outright ban ‘assault’ weapons and see if that works (the absence of ‘assault’ weapons didn’t inhibit the shooter at Virginia Tech from carrying out the deadliest mass shooting in U.S. history; the gunman used two commonly owned handguns to murder 32 people and wound 17 others) or we can act sensibly and recognize that more gun control laws won’t stop the next sociopath from killing innocents.

What will?  A well-placed bullet.