A 53-year-old wheelchair-bound Army veteran in Bogart, Georgia, protected his home with a pistol Wednesday afternoon and in the aftermath is upset about his broken door. 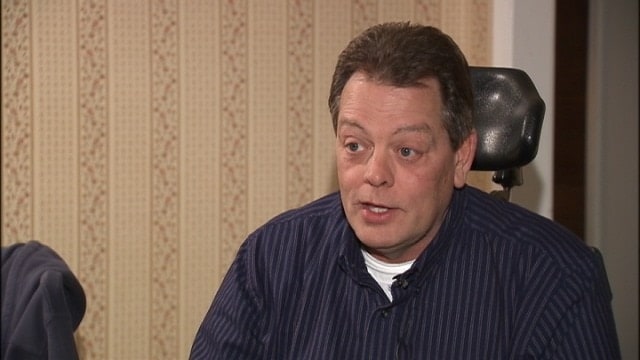 Mark Sikes, 53, was served in the U.S. Army as Military Police. He was stationed in Korea. (Photo credit: My Fox Atlanta)

According to the Augusta Chronicle, Mark Sikes was lying in bed at his home a little after 1 p.m. until he heard the noise — BAM! — of someone kicking in his front door. Immediately, Sikes grabbed the gun he kept in his night stand, and mere seconds later he saw, from his bedroom, the intruder standing in the hallway. Without hesitation, Sikes pointed the gun (what looks like a 9mm Browning Hi-Power) at the intruder and told him to “get the hell out,” which the intruder quickly did.

Sikes said he didn’t notice if the intruder was actually armed, not that it matters much. “I wasn’t going to wait to see if he had [a weapon],” Sikes told the paper. “All I know is he was in my house. Things are starting to get out of hand, and if people don’t start standing up for themselves and putting crooks in the ground, the law is just going to slap them on the wrist and let them go.”

The suspect is described as a black male, 19 years old, and he wore all black clothes at the time of the invasion. Also, police told local media that they have actually identified the intruder because of evidence he dropped at the scene.

While the police search for the man, Sikes told My Fox Atlanta that, since the event, he’s keeping his gun closer to him than he did before. And he warns the intruder, “Find something else to do besides try to rob people … Because you came real close to losing your life.”

And while the intruder has some hard, yet, necessary life choices to make, Sikes has more quotidian problems.

“Now it’s going to cost me a bunch of money that I really don’t have to get that door fixed.”

We hear ya Mark.