The Economic Impact of Postponing the Eastern Sports and Outdoor Show

While many focus on Second Amendment advocates’ victorious forced postponement of the Eastern Sports and Outdoor Show, very few are talking about just how financially devastating postponing the show actually is.

Guns.com is in no way criticizing the exhibitors that stood their ground and reaffirmed their convictions, and we applaud the gun lobbies like the National Shooting Sports Foundation and the National Rifle Association for trying to persuade Reed Exhibitions to reverse its decision, this scenario is just an unfortunate repercussion — especially when there are so many hurting financially in the U.S. — of a much larger and often misconceived debate.

We’ve heard from friends and family who attend the show annually that the Eastern Sports Show is more about recreational activity than it is about guns. Albeit guns are a big part of it, but they aren’t the main focus. Animals like deer and fish are put on display inside the Farm Expo, patrons attend to see the accumulation of exotic hunting equipment and to pick up free swag like hand warmers, soon-to-be-retirees peruse the line up of RVs and fantasize about exploring out West. And in an attempt to preserve the spirit of the show, Reed Exhibitions, the company that manages it, did something they, apparently, thought was apolitical: banning the display and sale of AR-style rifles. 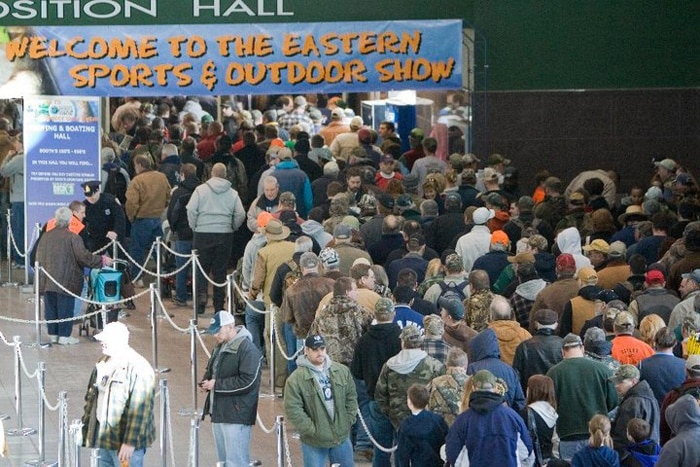 The controversy is over AR-style rifles and ironically AR-15s have actually been defined, by the NSSF, as a modern sporting (hunting) rifle.

Now, numerous smaller companies, retailers and Harrisburg-area businesses stand to lose a lot of money and exposure. On top of that, nearly 250,000 expected attendants — gun rights advocates, hunters, fishermen, hikers, campers and a curious few — will miss out on the show that was scheduled for Feb. 2-10.

Tourism officials at the Hershey Harrisburg Regional Visitors Bureau estimate that the local economy in and around Harrisburg, the city that has hosted the Eastern Sports Show for more than 60 years, stands to lose around $80 million in revenue because the show’s been postponed.

That money would be spent by visitors and exhibitors who would theoretically stay at hotels in the area, eat at local restaurants, and buy souvenirs, toiletries and whatnot at local shops.

Originally there were around 1,000 exhibitors expected to attend this year until Reed Exhibitions announced that it wasn’t allowing AR-style rifles in the show. Right off the bat the prohibition directly effected about 100 exhibitors, said Rick Dunlap of the HHRVB.

Since Reed Exhibitions’ statement was released around 300 exhibitors, including the 100 companies already effected, have boycotted the show, Dunlap said. Some of them were not even gun related; they’re just doing it because they feel they need to.

Because of the reaction Reed Exhibitions has postponed the show until an unspecified date. However, neither the exhibitors or Reed Exhibitions seem to be backing down, so it appears that the show will just be cancelled for the first time since it started in 1951.

“[The Eastern Sports Show] has been a long standing tradition in our community and it’s taken that long [62 years] to grow,” Dunlap said. “It’s been a major pillar to our [tourism] business.

As for the exhibitors, it isn’t cheap to set up shop at a convention like this. Otis Technology gave Guns.com a ballpark estimation of a rate they work with, which is around $1,500 per 100 square feet and an additional $300 for a corner booth.

However, Dunlap and Smith & Wesson were able to confirm that Reed Exhibitions have announced that they would be refunding exhibitor and attendance fees.

But Otis and Smith & Wesson will survive this because they’re common, successful brands, but smaller companies like Virginia Blade Knives, as they told The Outdoor Wire, actually attends the Eastern Sports Show to sell products and set up deals.

“For years and years this show has been our bread-and-butter,” said Duke Dudely of Virginia Blade Knives, “not going means we’ll be hurting – in a big way.

Just like for the city of Harrisburg, the Eastern Sports Show is a financial pillar for Virginia Blade Knives. Without it, Dudely suggested, possible bankruptcy for the company. That’s how much it means.

But, “It’s a matter of right versus wrong,” he added as reasoning for boycotting the show.