One of the best things about SHOT Show is bumping into people that you probably would have never met had you not gone to the show.

Case in point, Guns.com met author and freelance writer Dan Baum who was at SHOT promoting his latest book, Gun Guys – an in-depth and delightful look at America’s love affair with firearms (see full summary below).

Now, to be honest, given our busy schedule and the number of high-profile interviews we had on the docket – Motor City Madman Ted Nugent, 5-time Olympic medalist Kim Rhode, CEO of Ruger Firearms Michael Fifer – we didn’t know if we’d have time to talk with Mr. Baum. 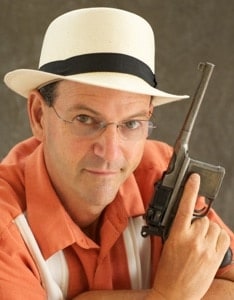 But as luck would have it, we did have a chance to briefly speak with Mr. Baum about his book – and we’re so glad we did.

Why are we glad?

Well, for two main reasons.  The first is that as a self-described “tax and spend Democrat” and “big Obama guy” Mr. Baum represents what many gun owners would describe as an outlier, i.e. someone who is markedly different then the typical gun owner.

In talking to him, he reminded us that we should not define someone solely based on his/her political persuasion or party affiliations.  Moreover, that there are plenty of liberal gun owners out there who are just as concerned about the impending gun control legislation being kicked around Congress as the rest of the conservative-leaning gun community.  And this augurs well for a victory for gun rights in 2013 (i.e. the defeat of Feinstein’s 2013 Assault Weapons Ban).

The second is, well, he is a truly gifted writer (Mr. Baum was a staff writer for the New Yorker and a regular correspondent for the Wall Street Journal).  And good writing deserves attention.  Consider his brilliant remark in our interview about why gun owners derive a sense of pride from their guns.

“It seems like gun people derive a tremendous amount of self-esteem from their guns.  When I say that to non-gun owners, they say, ‘Yeah, cuz they can kill people.’  And it’s exactly just the opposite.  It’s the complete reverse.  I found again and again a tremendous amount of pride in gun people in being able to live alongside these incredibly dangerous things and manage them and use them effectively and nobody gets hurt.  That’s a big deal.”

He’s absolutely right.  The allure of owning firearms is not about taking lives, but about taking responsibility for oneself, one’s family and one’s community.  Gun ownership is rooted in personal responsibility and civic-minded stewardship; it has nothing to do with vigilantism or the desire to inflict harm on others.

Dan Baum “gets it.”  More people need to look at it as objectively and analytically as he did. Buy a copy of his book and pass it around.  It might help other people to “get it,” too.

This is a critically important observation that, as Mr. Baum pointed out, so many pro-gun control advocates fail to recognize.  So, in today’s hyper-partisan political climate, it’s fair to say that we need more unique voices, we need more free thinking individuals, we need more gun-loving patriots who are willing to edify those who remain in the dark about what guns mean to America – in short, we need more people like Dan Baum.

Below is a brief summary of Gun Guys, set to hit the store shelves on March 7, 2013.  You can learn more about Mr. Baum and his book by visiting his website: danbaum.com.

Here is armed America—a land of machine-gun gatherings in the desert, lederhosened German shooting societies, feral-hog hunts in Texas, and Hollywood gun armories. Whether they’re collecting antique weapons, practicing concealed carry, or firing an AR-15 or a Glock at their local range, many Americans love guns—which horrifies and fascinates many other Americans, and much of the rest of the world. This lively, sometimes raucous book explores from the inside the American love affair with firearms.

Dan Baum is both a lifelong gun guy and a Jewish Democrat who grew up in suburban New Jersey feeling like a “child of a bitter divorce with allegiance to both parents.” In Gun Guys he grabs his licensed concealed handgun and hits the road to meet some of the 40 percent of Americans who own guns. We meet Rick Ector, a black Detroit autoworker who buys a Smith & Wesson after suffering an armed robbery—then quits his job to preach the gospel of armed self-defense, especially to the resistant black community; Jeremy and Marcey Parker, a young, successful Kentucky couple whose idea of a romantic getaway is the Blue Ridge Mountain 3-Gun Championship in Bowling Green; and Aaron Zelman, head of Jews for the Preservation of Firearms Ownership. Baum also travels to New Orleans, where he enters the world of a man disabled by a bullet, and to Chicago to interview a killer. Along the way, he takes us to gun shows, gun stores, and shooting ranges trying to figure out why so many of us love these things and why they inspire such passions.

In the tradition of Confederates in the Attic and Among the Thugs, Baum brings an entire world to life. Written equally for avid shooters and those who would never touch a firearm, Gun Guys is more than a travelogue. It gives a fresh assessment of the heated politics surrounding guns, one that will challenge and inform people on all sides of the issue.  This may be the first book that goes beyond gun politics to illuminate the visceral appeal of guns—an original, perceptive, and surprisingly funny journey through American gun culture.