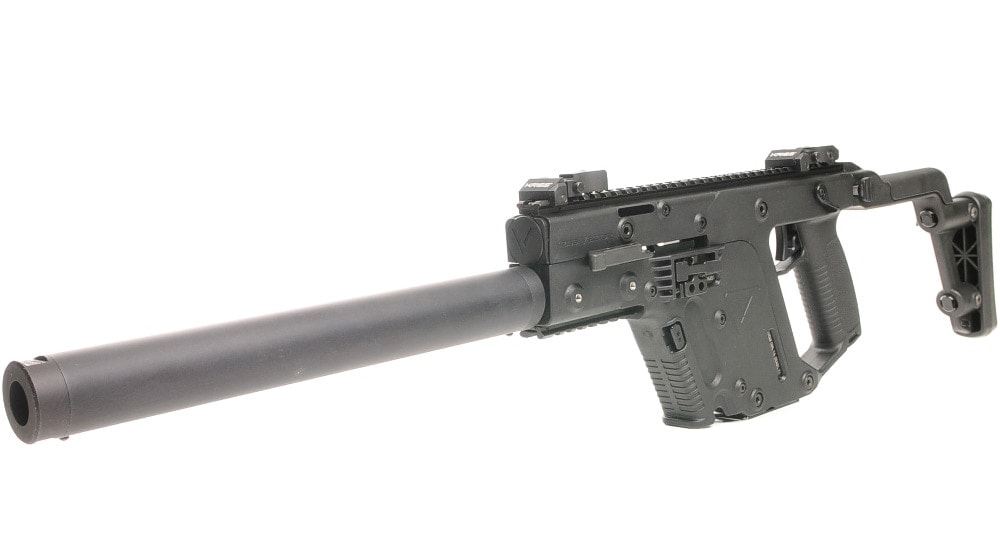 Kriss is announcing a rimfire version of their darling submachine gun for low-cost plinking and training. The Vector is a submachine gun in .45 ACP with an exotic delayed-blowback recoil system that keeps muzzle climb down. In full-auto, it’s one of the most controllable submachine guns we’ve had the pleasure of shooting. It’s unusual appearance has already earned it a spotlight in movies, television and video games.

“With the rising price of .45 ACP ammunition, KRISS has developed the Vector .22LR to be a low-cost alternative to the Vector .45 ACP. The Vector .22LR retains the same external design and fire controls as the original Vector, but utilizes a special bolt system that reliably feeds and cycles various .22LR ammunition.

“The Vector .22LR will be available in both Carbine and SDP (Special Duty Pistol) configurations and released in 4th quarter of 2013. Pricing will be announced soon.”

The thing is, we’re not so sure this is a great idea. Sure, for hardcore fans of the Vector platform, particularly those who like the style and don’t care about ergonomics or any of the features missing from a semi-automatic variant of the select-fire models, this is going to be a hit.

But from anyone looking for a solid .22 we’re not so sure about the Vector. The design is the epitome of form following function. The magazine well acts as a front pistol grip that you can’t wrap a thumb around and it’s very square. Behind that goes the downwards-cycling bolt carrier, something that’s sure to be missing from a rimfire pistol or carbine.

We’d bet dollars to donuts that the Vectors in .22 will be blowback and single-stack; the fat magwell and bolt carrier housing will be entirely cosmetic. The final product is going to be a chunky .22 with a short sight radius and an awkward grip.

And as far as good .22s go, when it comes to both pistols and carbines, there are dozens of lighter weight, slimmer, prettier, more utilitarian, comfortable, and likely less expensive options out there. We can’t help but think that for anyone looking for a low-cost shooting alternative, on almost every conceivable front, there will be better options out there. The one thing going for this is that it’s a Kriss Vector. Even if it’s a rimfire.

This fits into the narrow market for Vectors that are about as real as airsoft but fire live ammunition, and as cool as that is, it’s not very deep. It is, however, very good news for Kriss owners who want a plinker, and shooters working with plinker budgets looking to own a Kriss.

Rimfire variants of the carbine and pistol should hit the market towards the end of this year. Kriss has long been promising other Vector (or V10) models in 9mm and .40 S&W; we can only hope that those models have not been back-burnered.