A quarter-million new National Rifle Association members in a month.  Guns and ammo flying off the shelves.  High capacity magazines selling so fast that manufacturer backorder times stretch out for years out and carry prices that are just as ludicrous.  It’s apparent that gun owners will not go gently into any good night.  Perhaps Uncle Ted summed up the sentiment best at SHOT Show 2013: “I believe the celebration of American families buying more ammo and firepower in the last 30 days than ever before in history is an undeniable statement that we will not take this lying down.”

Though I full-heartedly agree with Nugent, I’m a top down kind of gal and with the fabric of the Second Amendment in dire need of protecting, I often wonder what more we gun owners can do with our paychecks besides just buying up gear or donating it to gun rights advocacy groups?  The fact is, individual gun owners can answer those who want to curtail our Second Amendment rights—either passively or directly—by becoming aware of where their dollars go and tailoring their spending practices accordingly.

While the NRA has a long list of companies, organizations, celebrities, journalists and media outlets with “anti-gun policies,” Jim Scoutten, a famed TV personality in the shooting industry, is the one most recently raising awareness of “The Economics of Gun Control.”

The public has a right to know

Since the tragic events in Newtown, Connecticut, the public, celebrities and corporate entities have responded with emotional, knee-jerk reactions by establishing or supporting gun-free zones at public places, pitching dollars to gun-control causes and/or suppressing the sale of firearms and firearm related goods and services. Whether they know or realize it, they’re hurting gun rights. While some like Wal-Mart or Dick’s Sporting Goods make public announcements, other companies implement gun control stances surreptitiously. 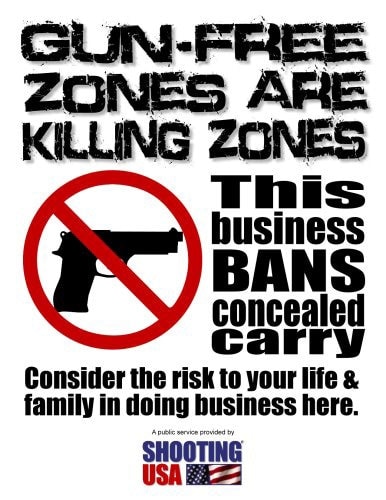 Jim Scoutten asks those willing to print this flier, tape it up next to a sign that reads “Gun Free Zone”, snap a picture of it and then email it along with the name and address of the establishment to him.

Most recently, news broke about Groupon, the daily online coupon dealer of all things imaginable, has suspended sales of all gun-related “groupons,” including those for discounted concealed carry and gun safety classes.

Similarly, it has just surfaced that Buffalo Wild Wings has established itself as gun-free zone.  Outrage among the chain-restaurant’s fans is obvious on their Facebook page, with many promising boycotts pending policy changes.

These tax-paying companies’ have the right to implement whatever policies they so desire and support whatever causes they fancy, but I would remind everyone involved that it is a citizen’s right to protest these policies with their words and wallet. Scoutten has on his website, Scoutten’s Shooting USA, a page dedicated to making the feelings of second amendment supporters known to business owners who feel otherwise. On the site Scoutten makes available business cards and fliers stating “No guns, no money,” and encourages those interested to distribute the material to the businesses with anti-gun policies. Going one step further, Scoutten asks you to notate and photograph these establishments, and then submit them to him via email for his album (which Guns.com assumes he’ll make available to the public).

While parts of the NRA list may be out-of-date, incomplete, or not entirely accurate, it is however a valid and valuable jumping off point for those interested in knowing where the money and support goes.  However, responsible consumers, like responsible gun owners, should do their own research into a companies’ history before organizing or performing any boycotts.

I enjoyed wearing Levi-Strauss jeans until I learned of the company’s sentiments.  In the past Levi Strauss has donated money to pro-gun control groups, most notably the Center to Prevent Youth Violence (formerly PAX), whose co-founder and executive director is the Brady Campaign’s President Daniel Gross. While the organization says its agenda is to “help bring an end to gun violence against children and families,” it does so by banning guns.

It is also important to note that many of the companies on NRA’s list are parents to countless other brand holdings like Sara Lee’s control of Hillshire Farms, Ball Park Franks and many others.

According the Examiner, Sara Lee’s “foundation named Sarah Brady one of its “Frontrunners” in 1997 and awarded her $50,000 for her “humanitarian” work.”

Rounding out the long NRA-ILA list of disappointing corporate names are several NFL and MLB teams (best read the list if you root for teams in St. Louis and Kansas City). 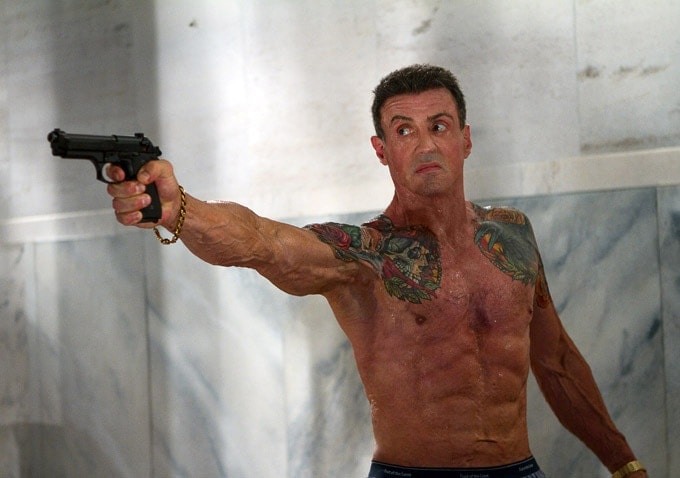 Sylvester Stallone, who looks terrific for a 66-year-old by the way, aims a sunshine ray in the film “Bullet to the Head.”

On the same list are celebrities and national figures who the NRA says “have lent their name and notoriety to anti-gun causes, speaking out for anti-gun legislation and providing a voice for anti-gun organizations.”

Thought actor and director of the newly released action film “Bullet to the Head” Sylvester Stallone had your back when it came to gun rights?  Guess again.  He has very openly voiced anti-gun sentiments.  While living in the UK years ago, and in response to the shooting death of Phil Hartman in 1999, Stallone was shown on Access Hollywood saying, “Until America, door to door, takes every handgun, this is what you’re gonna have. It’s pathetic. It really is pathetic. It’s sad. We’re living in the Dark Ages over there.”  That’s much less Rambo, and way more Rosie O’Donnell.

Each and every one of us have worthwhile a voice, legally owned and treasured guns, and a pocketbook to do the talking. While my few dollars or your solitary voice is negligible, the combined influence of responsible gun owners around the country will not go unnoticed. Furthermore, it is our duty to act in whatever reasonable ways available and readjusting your weekly grocery bill to reflect a pro gun attitude is an excellent start because sends the message that policies affect profits – just look at what happened to the Eastern Sports and Outdoor Show.