In Riverside, a neighborhood about 12 miles west of Chicago, a man let his three dogs — a beagle, golden retriever, and a German Shepherd puppy — out around 1:20 in the morning to go potties. He figured they’d just do their business and then come back in, but what he didn’t expect was four hungry coyotes to barrel through the bushes, jump over his three-and-a-half foot fence into his backyard and try to run his dogs down. 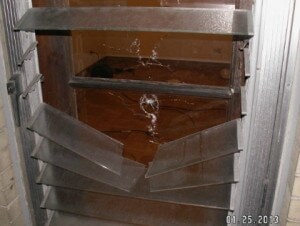 Roger Nelson said the coyotes were only a foot away from his pup when it got inside the house. The coyotes were quickly on their hind legs clawing their way inside.

In the dark, freezing morning, dog owner Roger Nelson hurried his dogs back and they flew up the porch steps and inside the house. The older beagle and golden retriever sprinted in first while the smaller pup trailed behind. Fortunately all three made it inside before any harm was done, but the door, with its several panes of glass, was no match for wild coyotes.

The pack scratched and growled and broke the glass in an attempt to get inside the house and at Nelson’s dogs. As the glass gave way, and his dogs growling and barking in fear, Nelson grabbed a high powered BB gun — what looks like Caracal pistol — and blasted away at the coyotes, hitting two of them.

“They were snarling. You could see all their teeth. The hair was, I mean, just standing up on their back as they were clawing at the door,” Nelson told the Chicago CBS affiliate.

Riverside Police Sgt. Bill Gutschick said that in his 25 years on duty, this was the first time he has heard of coyotes trying to get into someone’s home while chasing their prey.

Guns.com isn’t sure how much the BBs hurt the tough and tempered wild animals, but it was enough to keep, dare we say “scare,” the coyotes from continuing to destroy the door and kill a puppy. Nelson then phoned the police.

Riverside Police Chief Thomas Weitzel urges residents to be aware while outdoors because of wild animals in the area.

“Coyotes do not know the difference between pets and the wild creatures they hunt, so try to protect pets by accompanying them outdoors,” he said. “Use a short leash as coyotes have been known to attack animals that are on long leashes. Most importantly, use caution near any wild animal.”

Nelson and his family told the NBC affiliate that they’ve seen coyotes around before, but haven’t had any trouble. However, on Jan. 3 another Riverside pet — a 7-month-old Bichon-Poo — was killed in a coyote attack. Now residents are worried next time it won’t be a pet they go after. Maybe a child or elderly person.