NRA Poll: More than 8 of 10 Members Oppose a Ban on ‘Assault Weapons’

In an effort to get a sense of where its membership stands on the issues involved in the ongoing public debate on gun control, the National Rifle Association surveyed 1,000 active members on Jan. 13-14.

Last week, the nation’s gun lobby released the results of the survey, said to be the only scientific poll of NRA members.

The key findings were as follows:

This poll provides a stark contrast to a Mayors Against Illegal Guns survey of alleged NRA members conducted in 2012 by Fox News media wordsmith Frank Luntz.

The MAIG poll, which is frequently cited by the mainstream media and pro-gun control proponents, including President Obama, relied on “a non-random opt-in Internet panel to contact self-identified NRA members,” as the Washington Post noted.

In other words, it appears the methodology was inherently flawed (for more on this click here).  As the NRA pointed out, the Luntz polling group did not have access to the NRA’s membership list nor did it randomly select participants.

Nevertheless, the results from the MAIG poll have been regurgitated ad nauseum during the national debate on gun control in an effort to convince the public that there is a growing divide between NRA leadership and its members.

Though, as it turns out, if one is to accept the NRA’s findings it’s rather evident that NRA members are united on almost all of the major issues, particularly the need to ramp up mental health laws to keep guns out of the hands of the mentally ill.

“Mayor Bloomberg’s claims that gun owners are divided are totally false. It is nothing more than an attempt by anti-gun activists to further their long-standing political agenda,” said NRA-ILA Executive Director Chris Cox in a press release. “American gun owners and Second Amendment supporters are ready for Washington to put politics aside and come together to fix our broken mental health system.”

While the NRA’s poll is rather detailed and explicit (see the full survey by clicking here), there is one question where the gun lobby arguably dropped the ball.  That is, it’s question concerning universal background checks.

Instead of asking, “Do you support a law that would require background checks for every gun sale, including those made at gun shows and those made between private buyers and sellers (non-FFLs)?”  The NRA worded the question this way, “Do you favor a new federal law banning the sale of firearms between private citizens?”

Obviously, that’s rather misleading way to frame the debate over universal background checks, which wouldn’t ban the sale of firearms between private citizens but instead would require every transaction to go through an FFL. 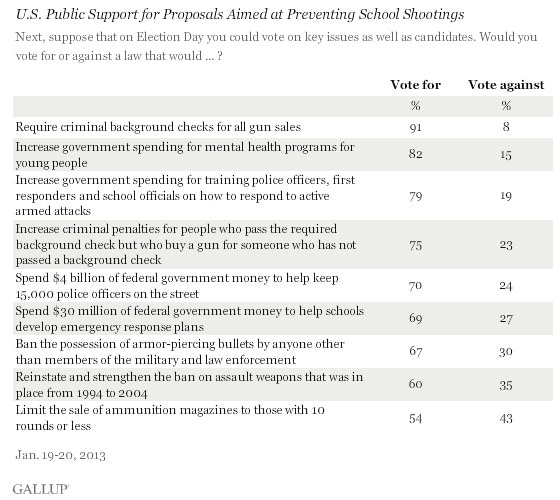 At the end of the day, the NRA’s poll confirms what many gun owners already suspected about the views of the gun community as a whole: widespread opposition to bans on high-capacity magazines and ‘assault weapons’ as well as widespread support for laws that address the broken mental health system.