The Boberg XP-9: The ghost of concealed carry future?

Firearms engineer Arne Boberg worked on the design prototype of a small concealable pistol for the better part of a decade. Long awaited, it appears now that this high end pistol, the XP-9, which has quietly been in production since about 2008, could represent a radical step forward in what we expect from our back up guns (that is if we can find one).

The problem with subcompact pistols

Subcompact pistols have been around for a centuries. Perhaps the original concealed carry pistol, the Derringer series of single and double-barreled vest guns, have 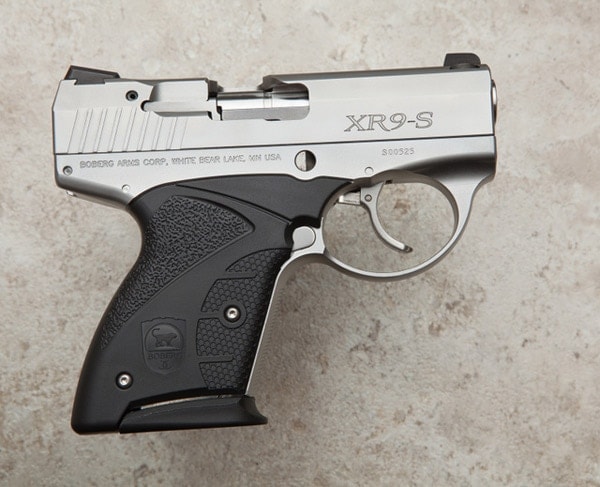 been around since before the Civil War. Small semi-auto .380s (starting with John Browning’s FN Model 1910 ) burst on to the scene at the start of the 20th century finding their way into the leg holsters of soldiers and civilians alike. These guns evolved into the cutting edge deigns of today like Kahr’s PM9 and the Ruger LCP.

By the nature of their design, these handguns have always suffered from the handicap of short barrels and bad sights usually sacrifices to the axiom “smaller is better”. The fact is though that the shorter the barrel, the shorter the sight radius, and the less likely the pistol will put rounds on target at a distance which can play a significant factor in a gunfight.

This problem apparently kept Arne Boberg awake at night for quite some time.

The truly revolutionary thing about this handgun, its that it the standard size model uses a 4.2-inch barrel, yet is only 5.8 inches long overall. This configuration gives the user a 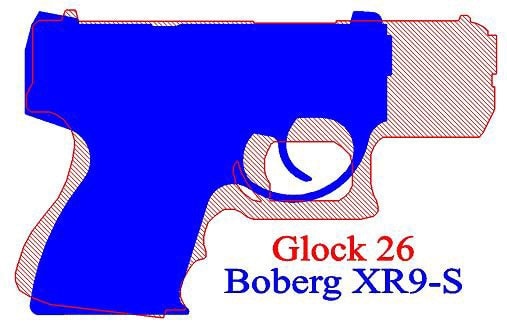 The Boberg XR-9 overlayed with a Baby Glock.

pistol as small as a subcompact but with a sight radius and barrel nearly that of a full sized carry piece.

To accomplish this feat of engineering, Boberg set the grip forward with the trigger guard nearly at the muzzle of the pistol. A locked breech design, like the Ruger LCP, puts the pistol’s action is far to the rear of the firearm while its rotating bolt is similar to the Beretta PX4. Since a traditional feed and extractor mechanism would not work with this design, the Boberg pistols use a pull-push action similar to the failed 1900 Mars Syndicate pistol—only these work. 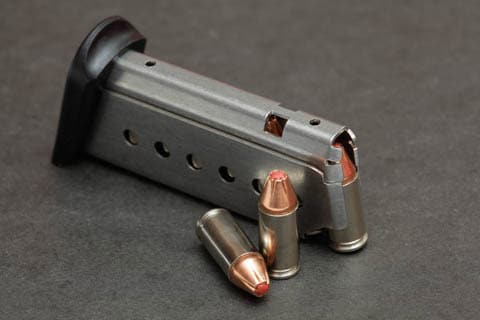 Magazines for Boberg pistols’ are filled with the ammunition facing backwards.

and then tilted up and into the chamber, the experience of loading and firing this weapon is very different from anything you are used to in a pistol. This oddity is further expanded when you realize that the magazine has to be loaded projectile-end first to allow rounds to be pulled rearwards rather than pushed forward.

On the downside, because of this abbreviated design, the Boberg does not hold open on the last round, as it has neither a slide stop nor a release. Mechanically it is a very complicated design and with 66-parts (a 1911 only has 60) and many different things have to fit perfectly for the gun to cycle properly.

The Bogerg also has no follower in the 7-shot magazine, just the spring. It weighs in at 19.5 ounces loaded. An even smaller model, the XR9 Super Shorty has a 5.1” length with a 3.35″ barrel and a 17.5-ounce with magazine, weight. This is still a 7-shot 9mm firearm, with an aluminum frame and stainless steel slide and parts. Needless to say it is significantly smaller than either a Glock 26 or a Ruger LC9.

What the future holds

Things got off to a slow start for Boberg Arms of White Bear Lake, MN when they first starting making these pistols and the first records we have of models shipping was in September, 2011. 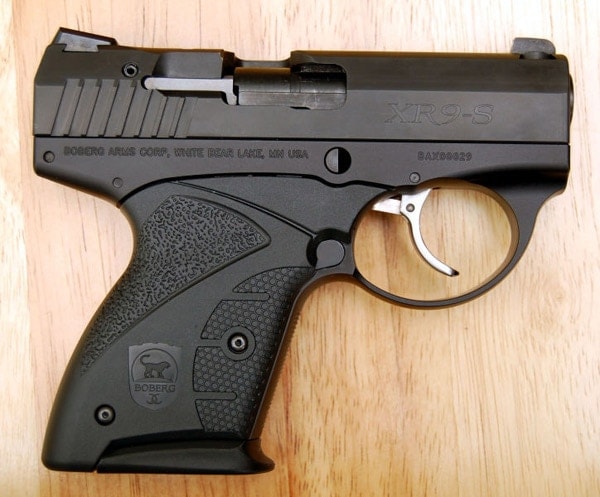 By late 2012, fewer than 500 examples of all models had so far been manufactured by Boberg, making them one of the rarest of species in the “new” gun market. One can argue that the design was still in its beta-testing during this time and it appears now the company is currently taking and filling orders (the website claims it’s a six week wait, which is par for course these days).

With so few of these in production, holsters are hard to find and spare magazines are unlikely except from the factory. Available in at least three different grades MSRP’d from $995-$1300, the rarity of these pieces have kept them at or above that on average. Prices are listed above $1300 on Boberg’s website and a search on Gunbroker’s forums can be a good indicator of price points on used models.

Currently, the Boberg’s pricetag is about four times higher than a Kel-Tec P-3AT, three times as much as a Kahr or Ruger LCP, and twice as much as a Baby Glock. It is still on par though with a SIG or Kimber, which is food for thought though its important to note that diehard concealed carry holders who prefer a .40/.45 platform won’t be interested in a 9mm compact no matter how much ballistics improves.

As the design matures and evolves, you can rest assured that as long as Arne Boberg keeps losing sleep, the results will be interesting.