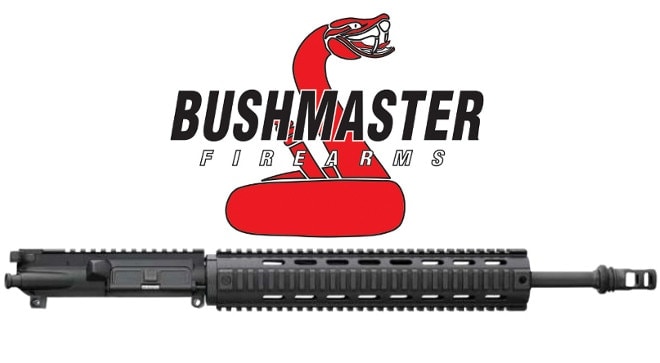 Bushmaster will be selling their 300 AAC Blackout uppers by themselves starting this year. They have been making 300 BLK rifles for about a year now, and they’re about to tap the aftermarket with a stand-alone upper.

The 300 AAC Blackout upper will be the same as the upper they include with their rifles. It’s a carbine-length upper with a lightweight profile free-floating barrel and an approximately 12-inch quad rail handguard.

It uses a low-profile gas block under the handguard and terminates with a 5/8×24-threaded AAC 51T suppressor-ready muzzle brake. It of course does not come with an AAC suppressor, but it will leave enough in your wallet left over to make that process quite a bit less painful.

Bushmaster is pricing the upper by itself at $870, but that’s the MSRP and we always expect real-world prices to be lower. Granted, right now, prices are not predictable.

The upper is lightweight, tipping the scales at a hair over four pounds, meaning that it should weigh under seven pounds with just about any lower you pick out for it.

When Bushmaster came out with the 300 BLK rifle they had intended to capture a portion of the law enforcement market, but with this stand-alone upper we suspect they’ll wind up capturing a pretty big chunk of the commercial market as well.

As it stands, there’s very little we’d change with this upper receiver. Ideally, it would have a 14.5- or 14.7-inch barrel with the flash hider permanently attached, as 300 BLK isn’t going to see a lot of improvement going all the way out to 16 inches, but the rest is totally solid. They don’t break any molds but aren’t selling yet another M4-type upper.

If you’re looking for an easy way to try the AR-15’s new .30 caliber cartridge but aren’t looking for a hassle, keep your eyes peeled for Bushmaster’s latest upper. It’s straightforward and simple, not totally basic but not burdened with a bunch of unnecessary features. And it’s priced right.

That being said, if you’re up for it and handy with a torque wrench, you can assemble your own 300 BLK upper pretty easily.

Either way, you can’t go wrong.