A Columbus, Ohio, concealed carrier saved himself and his two-month-old son, and ended an alleged crime spree when he shot an armed robber Jan. 7. 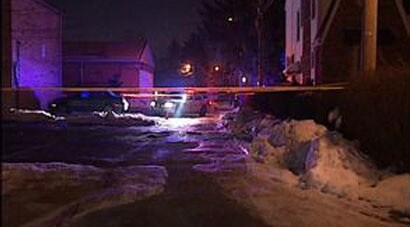 The driveway of Kelby Smith’s brother’s house. If it looks cold, that’s because it was cold. 27 degrees on Jan. 7. (Photo credit: NBC4i)

According to Columbus Ohio Police, Kelby Smith parked his car at his brother’s house on the west side of the city around 9 p.m. and while he was getting his two month old out from the backseat, a man approached him, put a gun to his head and demanded money. Smith set his son, who was in a car seat, down and then knelt down to shield the child from the gunman. He then handed over what money he had in his pockets: $40.

All of this seems depressingly typical.  But there’s a twist.

As the gunman began to leave, he turned and trained the gun back on the Smith, but Smith had already pulled his carry gun and then shot the suspect when he realized what was happening.

Although wounded and bleeding, the suspect was still able to flee the scene.

NBC4i reports that as police were at the scene they received a report that a man had arrived at Mount Carmel West Hospital to be treated for a gunshot wound. Police identified him as the suspect — 43-year-old James Thompson — he underwent surgery and was promptly arrested and charged with aggravated assault.

Smith will not be charged with a crime, however, Thompson, as ABC6 reports most recently, has been connected with stealing a car on Dec. 26, and is suspected of three other robberies. Police have not charged Thompson with those yet, but are looking into them.