In a story that ‘broke’ late last and further spread today, many media outlets are claiming that Neil Heslin, father of a slain Sandy Hook student, was heckled during his speech in front of a gun violence task force in the Connecticut legislature.  This was the same legislature session where a Sandy Hook parent was applauded for speaking on behalf of gun rights, see that story here.

No one in the crowd replies.  Mr Heslin then states, “Not one person can answer that question.”  At which point a number of the audience members speak out.  Listening to the audio with an unbiased ear it is clear that those who spoke up did so respectfully in an inaudible chorus   The only audible statement from the crowd is: “The right to bear arms shall not be infringed.”  Clearly no one heckled Mr. Heslin personally, the crowd was simply responding to an inquiry posed to them twice by Mr. Heslin.  Mr. Heslin even follows up the interaction with the crowd stating that he respects their opinion.  Watch the video below – the interaction takes place at the 15 minute mark.

Twitchy.com lists a full rundown of the outlets who pushed the false heckling claim.  Among those mentioned are Gawker, CNN, MSNBC, Vanity Fair, Media Matters, Daily Beast, Slate and The Huffington Post. 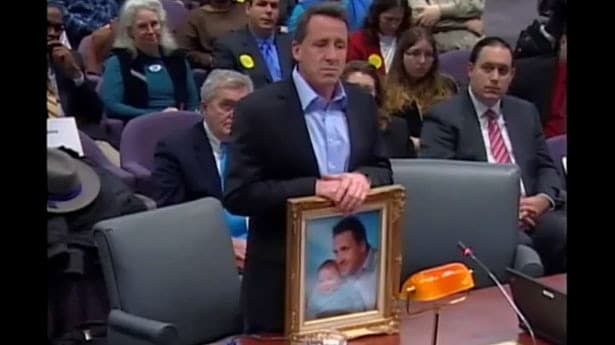