A 22-year-old man in Charlottesville, Virginia, scared the shit out of a group of people Sunday night when he walked into a grocery store with a loaded AR-15 strapped to his back.  As a result he pissed of folks on both sides of the debate.

Charlottesville’s NBC29.com reports that the unidentified man entered a Kroger grocery store around 5 o’clock Sunday night.  He left, returned to his car to retrieve an AR-15 and then went back into the store.

The real twist to this story is that he doesn’t seem to have been there to shoot anyone or steal anything.  Instead, it seems, the man was exercising his legal right to open carry.

The patrons of the store panicked and fled, dialing 911 as they went.  The police arrived in time to find the man in the parking lot of the grocery store with his rifle.  They peacefully detained the man and found a note in his pocket, declaring his intent to express his second amendment rights.  The police questioned him and after determining that he had broken no laws, they released him. The man has no criminal record, and owns the rifle legally.

Now those are the facts.  The easy part.  But there’s so much more to this story.

Where do you stand on the issue?

Do you respect the young man’s right to make such an overtly political statement in such a dramatic way?  Many of us believe passionately that such a demonstration of legal open carry (and free speech, in a way) should be celebrated rather than demonized.

Others among us will respect his right to open carry, but question his methods.

NBC29, in their ongoing coverage of the incident, talked to NRA instructor Bill Davis, who said, “I think it reflects on all gun owners in a bad way. I’ve talked to six NRA instructors this morning about it.  Why did he have that note in his pocket?  I think – this is my personal opinion – I think he expected to be shot, so they would have found the note and said he wasn’t doing nothing.”

The Charlottesville Police have a similar take on the incident.  Lt. Ronnie Roberts voiced his opinion for NBC.  “It does drain resources … the number of officers that were there and the heightened awareness on the officers’ part,” Roberts said.  “I think the overall aspect of it is, it will increase the call volume requiring a number of officers to respond and it is a very delicate situation that you’re dealing with.”

I respect the right to open carry.  I live outside of Charlottesville, and have for five years.  Twice I have seen average Joes in our grocery store with pistols on their hips.  And they didn’t cause a panic, though in both instances the men were receiving a lot of scrutiny from other patrons.

And I lived for a long time in New Mexico, in a variety of small mountain towns in the northern part of the state.  Seeing a gun on a hop, or a rifle slung over a shoulder was not uncommon at all.  It was ranching territory.  Guns are part of the culture.

Yet there are two distinct features that made this specific protest dangerous.  Now, in January of 2013, seeing a young man in a public place with what so many label an “assault rifle” may provoke fight or flight reactions from those he comes in contact with.  It would provoke those feeling in me.  No doubt.

A Charlottesville Kroger, at 5:00 p.m. on a Sunday isn’t terribly crowded, but the patrons in the store were fleeing, panicked and being evacuated.  These same patrons were on their phones with 911 dispatchers.  I doubt any of those patrons were saying, There’s a clean cut young man engaged in a peaceful public demonstration of his second amendment rights in the Kroger, if you would like to stop by and see.

Which brings me to the fight response.  I believe in the rights of the unnamed man to carry his rifle openly, whereever he wants.  I would also congratulate the police officers who arrived on the scene and allowed a peaceful resolution to the situation.  It is not hard to imagine that the demonstrator might have been shot on sight by a cop whose first impulse is not to protect all of our right to open carry, but to protect the citizens of Charlottesville (even though those are the same people, in some cases).

And I’m glad I wasn’t there.  I live close enough that I have shopped in this grocery store.  And this man’s behavior behavior fits a pattern that many of us associate with national tragedy.

To wit, the demonstrator left his vehicle, entered the store, looked around for, apparently, a “no guns allowed” sign but didn’t see one, so that’s when he went back to his car and retrieved his rifle.  This sets off alarms in my head.  It would have seemed to me like he was casing the grocery store.

I listened to a story on NPR’s Morning Edition the other day about Dan McKown.  McKown was in the Tacoma Mall in 2005 when a shooter opened fire.  McKown, a concealed carry permit holder, confronted the shooter.  With his hand inside his jacket on his pistol, McKown said “Son, I think you need to put your weapon down.” 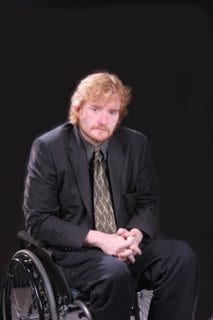 But the shooter didn’t put his weapon down.  While McKown offered reasonable advice, the man shot McKown five times. McKown lived.  There were no fatalities in this incident.  Many credit McKown’s actions with averting even more shooting.

This is the big paradox of concealed carry and can’t be ignored in the case of the man entering a grocery store with an AR-15.  Many instructors, including John Holschen (a force-on-force instructor with InSights who is cited by the NPR article about McKown’s actions) advised against talking to active (or potentially active) shooters.

The unidentified man in the Kroger in Charlottesville didn’t open fire, nor was he aggressive.  So no one, tactically, legally, or morally, had the responsibility of applying lethal force.  And the excellent police were wise enough to discern this.

But that’s a hard decision to make when panicked patrons are fleeing what they assume to be the next random act of senseless violence.

This is the time for civil disobedience.  And it is a time for civil awareness.  I still respect this man’s right to make his statement.  He broke no laws.  While I don’t appreciate his methods, I will steadfastly defend his poor judgement.