Gunfire erupted in Atlanta’s Price Middle School Thursday afternoon leaving one student wounded. The incident sparked a mess of a national story — amid a heated debate about how to curb gun violence — after word got out that the shooter was stopped by an armed guard.

As the story developed several rumors emerged about who did what and number of victims, but Friday afternoon city leaders held a press conference explaining what all they could say about the incident. 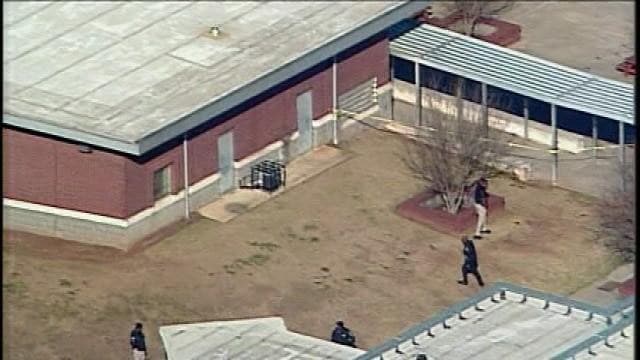 The incident happened outside in the courtyard of the school. While police are still investigating how the gun was brought into the school, some speculate the shooter entered through the teacher’s entrance. (Photo credit: Fox Atlanta)

Atlanta Chief of Police George Turner said the shooting was the result of a dispute between two groups of students, both allegedly affiliated with local gangs, outside in the courtyard of the campus. At some point the suspect, a 15-year-old male student, grabbed a .380-caliber handgun and fired several shots at the group he was arguing with. One of the shots grazed a 14-year-old boy’s neck.

Turner said investigators haven’t determined how many shots were fired exactly, but they found three rounds left in a six-round magazine, and they don’t know if the victim was the intended target and if he was in a gang, or if the suspect was simply firing indiscriminately.

A school resource officer, an off-duty cop, heard the shots and immediately responded to the scene where he ordered the suspect to put down his weapon. The suspect complied and was taken into custody without incident.

All this happened around 1:50 pm and the school was put on lockdown. APD SWAT arrived and began to clear the building ensuring there were no other threats. They finished around 5:45 pm.

The victim went to the hospital and was discharged later that night.

Atlanta Mayor Kasim Reed said that he and Turner began discussing how to react to a situation like this early in the school year and had actually revamped the conversation after the Sandy Hook shooting. Now, he said, they have no choice but to continue to plan and improve. 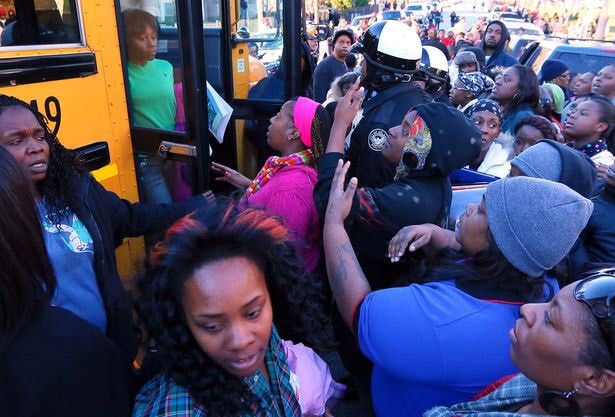 Parents waited outside the school for hours without any official word on what was happening. But, officials held off on releasing information because they didn’t want to misinform the public. (Photo credit: The Atlanta Journal-Constitution)

“This incident is an important reminder that we have to constantly focus on the safety of our schools,” Reed said. “So I will be reviewing … whether we have adequate police personnel, the right size and amount of personnel at our schools.”

Superintendent Erroll Davis of Atlanta’s Public Schools explained, the school district has 233 school resource officers. Many of which are APD officers working in their off time and contracted by the schools.

The Mayor went on to explain how his office, the police department and school district plan to prevent and/or control a situation like this in the future. Besides enhancing police presence at schools, they will also expand the city’s “video integration setup,” so they’ll have eyes in every school, Reed said. The police will be able to see what’s happening and they’ll know what they’ll be getting into if there’s an emergency.

“This is something that is doable and it is affordable, so it is a matter of will,” he said.

Currently preventative measures include screening students as they enter the school with a metal detector and posting a school resource officer.

“There were multiple statements that I’m thankful to God turned out to be false,” Reed said. “That just shows that we need to take this blessing and understand that tragedy can strike the City of Atlanta and our kids. We dodged a very, very devastating bullet in my judgement.”

The investigation is still ongoing. Police are looking into how the suspect snuck the gun into the school and where he got the gun from.