In a second round of letter writing, Chicago Mayor Rahm Emanuel reached out to several mutual funds — some of which were unaware of the contact — to pressure and “blacklist,” if need be, any gun company that opposes “commonsense” gun reforms. This comes just days after Emanuel asked Bank of America and TD Bank to deny financial services to gun companies that fail to embrace the same reforms. 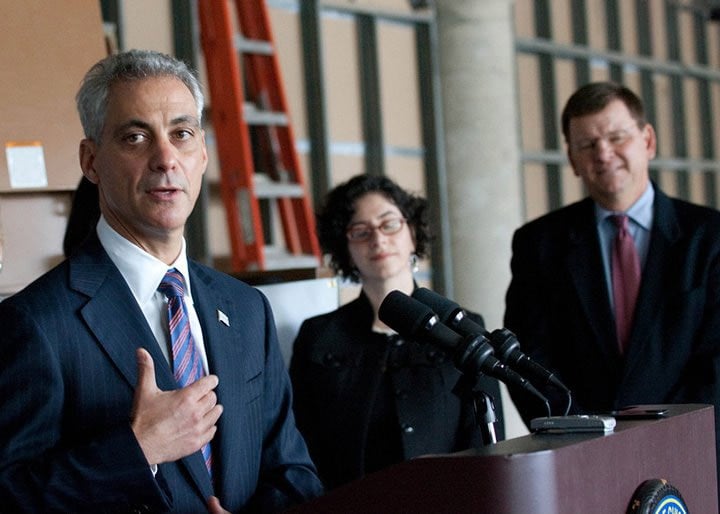 Chicago Mayor Rahm Emanuel has a rigid workout routine. He swims and jogs three days a week, bikes on the off days and takes a multi-vitamin everyday.

The letters were introduced on Jan. 30 and addressed to chief executives of Allianz, BlackRock, Dimensional Fund Advisors, Vanguard, James Investment Research and Capital World Investments. All of the funds own stock of gun manufacturers Sturm, Ruger & Co. and/or Smith & Wesson, both public companies.

“Just like the banks and pension funds, I believe that these Mutual Funds can exert an enormous amount of influence by taking a stand against gun manufacturers that continue to refuse to support commonsense reforms like required background checks and an assault weapons ban. The time is now for everyone to do anything they can to stop these military-style guns and magazines from ending up on the street and putting families, children and police officers at risk,” Emanuel said. “This has to be about doing what is morally right and not what is financially beneficial to their bottom lines.”

In each of the letters, Emanuel points out a gun the company manufactures (a Smith & Wesson AR-15 and Ruger Mini-14) and if it was used in a mass shooting, the fact that both Smith & Wesson and Ruger supported a gun lock to be sold with every gun, and just how much money the investment firm has invested in a gun company. According to the letters:

Guns.com contacted all six companies and by the time this article was written we only heard back from two. Oddly enough both companies told us that they had not received a letter yet, and we forgot to ask if Emanuel’s office sent the letters via email, fax, overnight or snail mail.

Besides saying the company had not received the letter, Capital World Investors spokesman Chuck Freadhoff said that his company does take into account social issues when they consider making an investment.

Dimensional Fund Advisors spokeswoman Faith Yando said, “[CEO] David Booth has not yet received a letter from Chicago Mayor Rahm Emanuel’s office. We will read it once it arrives.”