Winchester announced their latest rimfire cartridge just before SHOT Show this year, the .17 Winchester Super Magnum. It is super and magnum, from a rimfire; it projects a 20-grain .17 caliber bullet at speeds up to 3,000 feet per second.

That translates to about 400 foot-pounds of force—making it the most powerful rimfire cartridge around.

.17 Winchester Super Magnum is also very flat-shooting, and has a good ballistics coefficient. This makes it more effective at longer ranges; up to about 200 yards. Winchester offers three types of ammo, in 20- and 25-grain weights.

In fact, there are more cartridge options right now than there are rifle options. Winchester had some custom-built single-shot falling-block rifles for people to plink with, but Savage may actually hit the market first with their B.MAG.

We had some time at the bench with it at SHOT Show and like it a lot. It certainly kicks more than any rimfire cartridge you’ve ever shot, although you’d be hard-pressed to find anyone who thought it was uncomfortable. Energy-wise it’s about on par with 9mm. 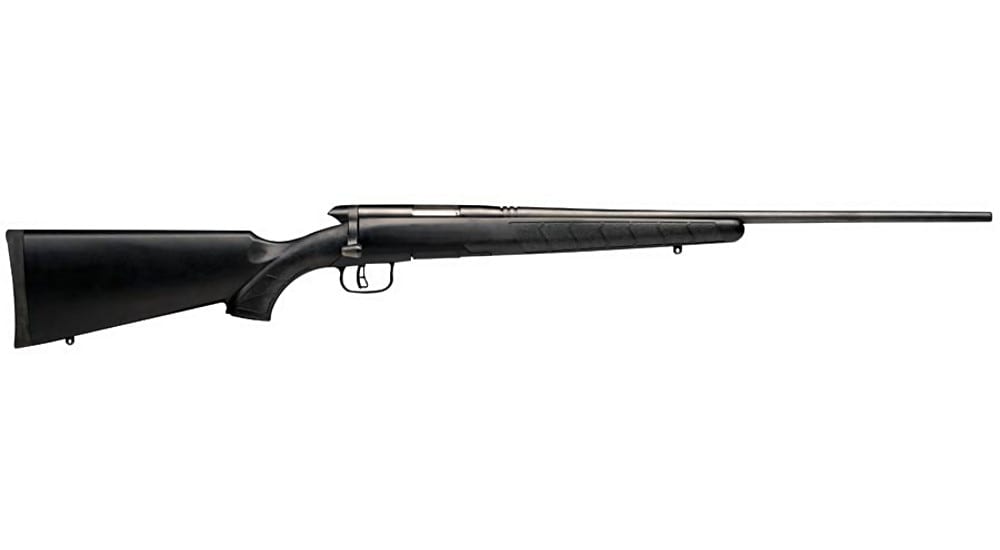 Part of the felt recoil was surely due to the weight of the B.MAG, which barely weighs more than four pounds. You could carry this gun and shoot it all day long without getting tired.

Accuracy was tops, with Winchester and Savage staff saying just about everyone was shooting 1 MOA if they weren’t shivering too much from the cold.

It’s a low-priced gun, as rimfire rifles often are, but its design draws heavily from Savage’s centerfire rifles. It was indeed built from the ground up for this high-energy rimfire cartridge; Savage didn’t just overbuild a .22.

And it’s a simple bolt-action rifle. It feeds from 8-round rotary polymer magazines and has a plain matte blue finish and matte black polymer stock. The trigger is adjustable and very good, particularly for a rifle with a $350 MSRP. When they do hit shelves, expect them to sell for $300 or less.

About the only complain we have about the B.MAG is that it doesn’t have iron sights. Leupold is making .17 WSM turrets for their scopes, which is nice, but we’d like to see a B.MAG that doesn’t need glass.

Time will tell if it will see widespread adoption. The cartridge is on the expensive side, at about $.30 per round. There are a lot of options for small game and varminting that are more competitively-priced. However, none have the range or stopping power of .17 WSM. And for competition it’s got a lot of potential. There are many rimfire shooting sports that allow cartridges other than .22 Long Rifle—and .17 WSM will do very well there.

Overall, we liked the B.MAG plenty. There is a place for this cartridge and this gun will see to it.