Today when we think of the modern and mighty US military safeguarding these United States, it may be hard to imagine that 250-years ago a very different looking armed force protected a country in a very different place. In 1763 the United States did not even exist, rather it was a series of 13 colonies all in allegiance to the British throne.  But there were then as there are now American soldiers. Moreover, they were at war.

Going back as far as the 16th century were the English muster laws of the 1570s under Queen Elizabeth I that organized all able-bodied men into a town militia. This law was brought to America from England and the Massachusetts Bay Colonial Militia was founded on December 13, 1636. Each man was to have a musket or fowling piece(what we would think of today as a shotgun) and a supply of ball and powder. The militia law ordered each man to appear with, “a Gun, fit for service, a Cartouch Box, and a Sword, Cutlass, or Hanger, and at least Twelve Charges of Powder and Ball, or Swan Shot, and Six Spare Flints.”

While most units used their personal weapons, a few stands of arms were issued to the towns by the colonies. These muskets were held by the town and issued to men who did not have a firearm whenever the militia mustered on the town green. The most common weapon for many of these men was the New England style fowler, which used a British made lock, mounted on a locally made barrel and stock.  Long weapons, they often had a 46-inch long barrel, which gave a total length of over five feet. Smoothbore in design they could be loaded with shot for hunting or a single large bullet for military service.

Moving forward each colony was obligated to drill regularly (after Sunday church service!) and starting in 1702 one-third of each town’s unit formed a group of ‘snow-shoe men’ that could muster and march out to the frontier to defend the colony from Indian attacks and the frequent small wars with neighboring French colonies in what is now Canada. 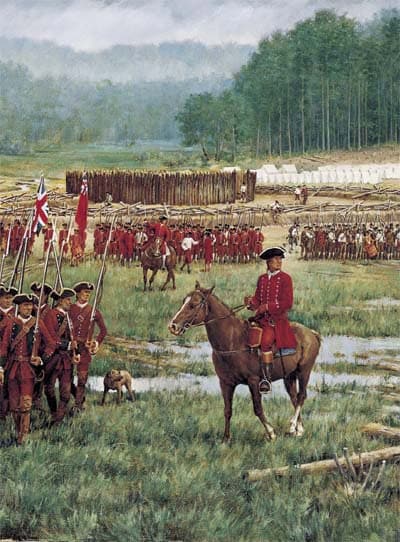 George Washington at Fort Necessity in Fayette County, Pennsylvania, 1754. This engagement would mark the future generals only military surrender.

Events in Europe led to the Seven Years War between France and Great Britain. This war, (which actually lasted nine years from 1754-1763) spilled over into the New World and soon the British army, with their Colonial American allies alongside them, found themselves heavily engaged in fighting with the French and their Indian allies in what we now call the French and Indian War. By 1754, the 13 colonies held a population of less than two million persons, which translated into some 300,000 militiamen spread across the hundreds of villages and towns from Maine to Georgia. While the vast majority of the militia was both unable and unwilling to leave their homes and go out the wilderness to fight the French, several thousand volunteered to serve in provisional units that would be the first American army units. These included nine companies of Roger’s Rangers, the Virginia Regiment (led by Colonel George Washington), and the New Hampshire Regiment.

Arms of the Colonials

While town militia usually only had their personal weapons and the Rangers often carried rifles, the arms of those soldiers of the new provisional regiments fighting the French were decidedly British. It was established that each soldier of the Virginia Regiment, for example, be issued a “Sea Service or a Commercial Contract Long Land Type musket with flash guard, hammer cap (hammerstall), bayonet and scabbard.” This musket is best known as the Brown Bess.

The Brown Bess was the standard British Army longarm from 1722-1838, a span which is one of the longest in military history. Over 10-pounds in weight, it was about 60-inches long with either a 42-or 46-inch long smoothbore barrel, which made it something almost akin to the goose guns of today. The flintlock snapped down into a baluster-shaped breech pinned to a walnut stock, the curved banana-shaped lock bearing a single (internal) bridle to ignite the powder.

Although the barrel’s caliber was .75-caliber, it was standard practice to fire a .71-caliber ball because about half of the load in any given charge of black powder never left the barrel. This of course meant that without any rifling and inconsistent propellant the Brown Bess was inaccurate past about 100-yards. A trained soldier could fire the flintlock 3-4 times per minute and would carry a 9 or 12 round “belly” cartridge box on their belt to speed up reloading.

However, when used against the most common enemy longarm of the day, the French Model 1746 Flintlock Musket it was an effective gun.

A number of reproduction New England Fowler/Milita Muskets are produced for sale today using modern production techniques. The Brown Bess, in production for nearly 150 years around the world often appear in collectable gun auctions for thousands. IMA acquired several hundred of these old war dogs in Nepal years ago and has been selling them gradually. New production replicas of the Bess sell for anywhere from $400-$700. 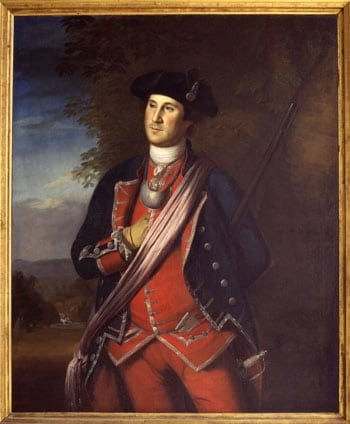 While the war with France ended in 1763 and the first American army units were disbanded, reverting to town militia, the skills and arms they used were not forgotten. At the outbreak of the American Revolution at Lexington and Concord in 1775, former members of Roger’s Rangers were among the Minutemen firing at the British, and many officers and soldiers of the Virginia and New Hampshire regiments, Washington included, went on to lead the Continental Army.

Today the Massachusetts Bay Colonial Militia is considered the beginning of the National Guard while the US Army’s Ranger Regiment still claims Roger’s Rangers as their grandfather.