EDITORIAL: An Apology to the NRA, ‘I was Wrong About Obama’ (VIDEO)

In a recent op-ed posted on CNN.com, NRA President David Keene wrote about why the nation’s gun lobby fights for the right to keep and bear arms, and toward the end of the piece Keene takes a second to have an ‘I-told-you-so’ moment to call out those gun owners who doubted the NRA’s claims about Obama’s gun-control agenda.

Hundreds of self-proclaimed gun advocates didn’t believe Obama was anti-gun based on his first term and wrote the NRA saying we were using scare tactics to have our way: Now they know.

In a way, I feel like he was taking to me.  I was openly critical and deeply skeptical of the NRA’s argument that Obama was purposely maintaining a low profile with respect to gun rights so that he could launch a gun-control crusade in his second term.

As an empiricist and apolitical pragmatist, I needed to see the proof of this Obama conspiracy.  I needed substantive evidence that the Obama administration was really angling to gut the Second Amendment in term two.  From my perspective, those facts never materialized.

I remember interviewing law professor David Kopel, Research Director of the Independence Institute, in June 2012 and asking him about what I referred to as the NRA’s “conspiratorial rhetoric.”

SHB: By and large most people have a good opinion of the NRA.  But in recent years the NRA has become more politically engaged.  Speaking to that point, Exec VP Wayne Lapierre has made some comments in recent months about an Obama “conspiracy to deceive voters and hide his true intentions to destroy the Second Amendment in our country” – do you find his take to be accurate?

DK: There’s certainly been attempt by the Obama administration to deceive the public about his views on gun control. He claims to support the Second Amendment, yet he endorsed the DC and Chicago handgun bans. His record on Second Amendment issues when he was an Illinois State Senator and U.S. Senator was awful. He always voted in favor of gun bans and ammunition bans. So yes, the Obama campaign machine has worked quite hard to deceive the public about his record on guns.

SHB: Follow up, if not, does the NRA run the risk of disenfranchising gun owners who don’t buy into the conspiratorial rhetoric of Lapierre?

DK: If gun owners look at the Obama administration record, including Supreme Court appointments, the Fast & Furious coverup, the attempt to promote gun control with the false claim that American gun stores are responsible for Mexican crime, the administrative imposition of rifle registration in the Southwest, and the import ban on M1 carbines, then thoughtful gun owners would heed LaPierre’s warning about how dangerous a second Obama term could be.

I completely respect Prof. Kopel’s opinion and keen observations, but I was still not convinced.  I thought, ‘Well, yeah those are all cogent points, but there’s still no concrete proof of a full-fledged conspiracy.’

Now, I wasn’t a complete dolt, I did recognize that Obama was not a true friend to the Second Amendment.  And I also said, repeatedly, that if Obama poses any threat to our right to keep and bear arms, it’s via his appointments to the Supreme Court.  But overall I was still dismissive of the NRA’s ‘Obama-is-coming-for-our-guns’ narrative.

Here’s a good example from a Guns.com article I wrote in Nov. 2011; I was responding to one of LaPierre’s statements in a Washington Times op-ed:

“The next president will likely appoint one and perhaps as many as three justices to the Supreme Court,” LaPierre wrote, “A second Obama term will mark the end of the Second Amendment, as we know it. That is a fact.”

While it’s difficult to share LaPierre’s apocalyptic certitude, one can certainly admit he has a point.  A point that would better served without the politically charged rhetoric, hyperbole and conspiracy accusations.

Now, in my defense, no one saw Aurora, CO, or Newtown, CT, coming.  And an argument could be made that Obama wouldn’t have pursued gun control at all if not for the horrific deaths of 20 elementary school children at the hand of a deranged gunman. 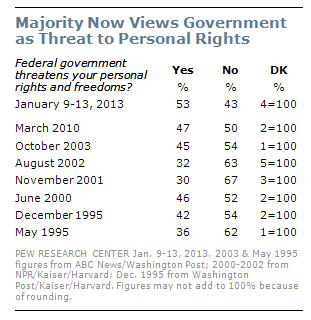 But I won’t make that argument.

Facts are facts.  And the current reality is that Obama is pushing for radical gun control reform in his second term, i.e. supporting both Feinstein’s draconian assault weapons ban and a ban on high-capacity magazines (and universal background checks, which the NRA seemingly supported at one time, see LaPierre’s explanation in Fox interview below about the lobby’s evolving position on this matter).  Whether or not Obama was planning to do this all along or whether he was pressured by recent events does not matter much at this point, the bottom line is he’s doing it – and I didn’t think it would really happen.

So, on that note, I offer a sincere apology to the NRA, David Keene and Wayne LaPierre.

Now, I also know that a lot of you saw this coming too.  So I’ll admit it, I was wrong, you were right.

I’m very interested to hear from everyone on this topic.  Did you see this coming or did you share my skepticism?  If you saw it coming, what was the critical piece of info that convinced you?  And if you were skeptical, what made you hold out?