EDITORIAL: What happens if they try to take our guns?

Over the course of the last month or so since the shooting at Sandy Hook Elementary School, the fight for gun rights has been unlike anything I’ve seen in my lifetime and perhaps the most dynamic since the Revolutionary War (and even then our own elected officials were not trying to suppress gun ownership).

So, what do we do if these bans on semi-automatic weapons come to fruition? What does that even look like? A halt to production like during the 1994 AWB? Registration? Confiscation? What happens to gun owners and our country if they try to take our guns?

Here in New York, the feeling that all of these things mentioned above could become a reality is palpable. Governor Andrew Cuomo’s now infamous, “No one needs ten bullets to kill a deer” speech set the tone. After shelling out thirty pieces of silver, he got enough “pro-gun” politicians to cave in and pass what is now the strictest gun control legislation in the country.

We now have a seven round magazine limit, banning some of the most popular sporting rifles from ever coming into this state, including the Ruger 10/22 and the Remington 597 as well as almost all the pistols made by Glock, Smith & Wesson, and other makers.

Word around the campfire is that Cuomo’s oppressive gun bill is all part of an attempt to gain traction for a presumptive 2016 Presidential bid. Folks up here tend to believe this because they’ve seen before that Cuomo has no problem walking all over gun owners, especially if his path is from Albany to 1600 Pennsylvania Avenue.

Fact is, wherever Cuomo goes, it’s going to be gun owners in New York who must now live with the regulations passed in his wake which are to include:

Failure to obey any of these rules will result in arrest and possibly jail time and as a resident of this state, this legislation affects my lifestyle and my livelihood. My first instinct is to ask, how are we going to fight this? My second is, how are we going to cope?

Speak (and be heard)

First off, I’m putting every legislator that voted for this bill on notice that they will be losing my vote come next election cycle and none more than the Senate Majority Leader Dean Skelos.

Skelos is a Republican who was the last line of defense against this bill passing and instead of holding fast, he let Cuomo walk right over him. Letting these politicians know that I am a gun owner and that they have lost my support sends a powerful message when delivered through the proper channels and especially when many other gun owners take the time to speak up and out as well.

Nothing scares people, including politicians, like the threat of losing their jobs and I encourage anybody who wants to protect the Second Amendment to respectfully call or write their congressmen and tell them how you feel about gun rights and their voting habits.

As far as what gun owners can do in the meanwhile (in terms of their spending habits), well ammunition is scarce to say the least, and I’d gamble even more so in New York state as it seems everyone is trying to buy it up before the new background check system goes into effect.

Reloading supplies have been drying up faster than a tear in the sun, but I think the real thing to watch is going to be the rifles and shotguns. I have a feeling in the months ahead, we are going to see a run on just about any popular long gun in any practical caliber.

With assembled AR-15’s virtually nonexistent on the commercial market, pump action shotguns, particularly in the short-barreled guise, have begun flying off the shelves. So have 1911 style pistols with their seven rounds magazines.

Compact .380 pistols are also hotter than ever, and suddenly there is a slight resurgence in revolvers like the .38 Special and .357 Magnum with their five and six round cylinders. I have talked with some dealers and a couple of select lever action rifles like the Rossi Pumas in their pistol calibers are also becoming scarcer in stockrooms because there are no semi auto rifles in .223. I admit it may be true that panic buying has set in (what gun shows that have not banned or canceled have been mobbed) but all I see in this push are scared gun owners racing to get ahead of the legislation.

I’ve spent a lot of time dwelling on New York’s gun law troubles. What if the worst happens and some of the Federal laws get passed? 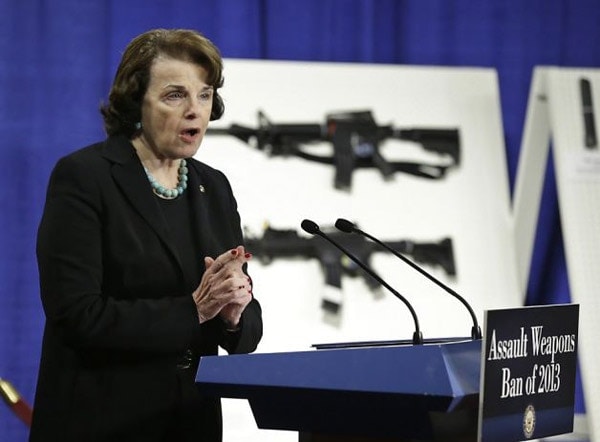 The Assault Weapons ban, Round 2.

lose their jobs to vote with Obama on this, what he or some in his administration are cooking up is anyone’s guess. One thing I know though is that those executive orders he passed were not for show; Obama is serious about passing something and I think if he doesn’t get what he wants this round, he will try again (as recently modeled by Dianne Feinstein).

Well, as I already said, we need to keep pressure on the legislators in Washington and make sure that they know that if they vote for new control, they can kiss our vote goodbye. We owe it to our children to do our level best to hand these politicos their pink slips; our Second Amendment rights are not negotiable. I’ve heard gun owners here in New York talking about moving to a gun friendly state. I say, if Obama’s laws become federal decree, what’s the difference?

I, for one, don’t want to leave my home and if America starts surrendering its gun ownership, where else in the western hemisphere is there to go? Canada? Mexico?

While the courts will eventually see this New York law or a Federal one in front of them, in all honesty, it will not be anytime soon. It could be years before an “assault weapons ban” ends up in front of the U.S. Supreme Court, though with Obama in charge, there is the possibility of a new judge, which could mean this whatever it is might never be overturned. Regardless, we have to live under the threat of it for now and gun owners are just going to have to get used to some guns not being available.

In the short game, shooters who are looking to fill gaps in their gun locker are going to have to look towards the unconventional to fit their needs. Believe it or not, there are still some great gun deals to be found out there if you’re creative and deliberate in your choices. And granted, there are still formidable 1911 style pistols being sold in New York, but unless some makers start modifying their magazines I see few new .22 LR pistols other than little pocket guns coming into the Empire State. It is unknown how many companies will alter their guns and magazines to accommodate to the will of Cuomo.

So even if you’ve already started digging holes in your backyard, I think the key is to not get discouraged or angry… yet. We still have plenty of fight left, and I mean that legally and responsibly. If we go spouting off about revolting and doing things that make gun owners look like the ignorant hicks the gun haters have been calling us, you can bet legislation will sail through various states and Congress faster than berries through a goose.

Yes, there is a revolution in the works, but it comes through making sure we get gun owners together and mobilized and the undecided, non gun owning public aware and on our side. It doesn’t matter if we don’t like it. It doesn’t matter if it’s fair or we’re right. It’s simple math. Right now, we need to convince voters who believe otherwise that we are not the monsters behind the shootings and that the guns are not the enemy. If we speak the truth, this shouldn’t be hard.

I think above all though, we’ve got to keep the gun ban before us in perspective and by perspective I mean the 1994 assault weapons ban. Even if President Obama and Senator Feinstein get their way, they’ll still have to hurdle the many obstacles in front of the law’s implementation, both legislative and practical, and these are the same ones that sidelined its Clinton era equivalent. The sale of components and the shear volume of semi-automatic guns already in the hands of law abiding citizens would make registration let alone confiscation unfeasible in any practical terms, so they’ll more likely try putting a brake on the manufacture of semis (once again) and the transfer of existing weapons.

It’s facts like these that confirm for me what many gun owners are saying: at its heart, this new gun law is more about making some people feel good, than about actually stopping school shootings. If this were about reducing crime, politicians would be looking at new solutions rather than ones that failed almost 20 years ago. Now, that’s a historical precedent that even non-gun owning voters can appreciate.