EDITORIAL: Are Gun Shows on the Endangered Species List?

Back when Wells Fargo was a delivery service and most towns looked more like Mayberry, kids could bring their hunting rifles to school for show and tell (without triggering a lockdown) and all across this nation we held gun shows.

Gun shows are an American tradition. Like mom’s apple pie and baseball on a summer’s evening, they are an emblem of essential Americana: entrepreneurs, free markets, commerce and products that spring from and are protected by American thinking and ingenuity. And, if recent events are any indication, these American institutions are about to go the way of spats, button-down shoes and high school virginity. Let me explain…

Though in recent days regulations, insinuations and memes all seem to be working to put gun shows on the road to extinction, I personally believe the seeds of gun show destruction were sewn back in the 1960s. I route the sentiment back to the Vietnam war, when the counterculture movement was successful in turning popular opinion away from the belief that America is a shining city on a hill and towards the concept that America is a global bully, throwing it’s weight around like a spoiled child.

Vietnam carried with it an enormous cost from a societal point of view and, aside from the massive casualties sustained on both sides, nowhere was the societal shift more pronounced for civilians’ at home than in America’s attitude towards it’s own returning military. For the first time in our nation’s history, war veterans endured scorn and derision from the very people for whom they fought. The “ugly American” was an image that permeated the media and it sent the country on a guilt trip that only partially abated in my opinion with the election of Ronald Reagan in 1980. But in that time between Vietnam and Reaganomics, guns and the culture that comes with them went from “useful tools” to “dangerous toys”.

While the first wave of gun fear was directed at the military, it wasn’t long before privately owned guns came under fire as well, though by this time the movement had become more institutionalized. For example, in the 1970s kids just learning and forming opinions about guns weren’t given an education but rather bombarded by confusing depictions and mixed messages about the realities of firearms. On the one hand, youths were fed a steady diet of anti-gun PSAs while on the other they sat front seat to an explosion of cartoonish violence in film and television. For their own part, these works of fiction often adopted the message that “the only good gun is a gun in the hands of a cop,” and often that was only if the cop hated the whole idea of using a gun in the first place.

Whenever I hear talking heads going on about the culture at gun shows, it’s hard to hold back the laughs. Contrary to the blood-thirsty, Rambo-esque images of mercenaries selling organs for AKs so favored by anti-gun groups, gun shows are usually quiet affairs with mom-and-pop vendors marketing to appreciative crowds. If they’d ever actually been to one, they’d know gun owners and sellers are largely an unassuming and polite lot. But perception is far more important than reality, and since the 1960s, that has held true especially when it comes to guns and those who chose to own them.

In step with this, gun shows currently top Mayor Michael Bloomberg’s Mayors Against Illegal Guns hit list. Groups like the Brady Campaign, MAIG and the rest communicate the message that gun shows are a hotbed of criminal activity; the prime conduit for criminals to obtain guns and source of many guns headed to Mexico.

Heard someone who’s never been to a gun show begin a story with the phrase “The Gun Show Loophole” yet? Of course you have and it wouldn’t surprise me if what followed was bereft of logic. This is because gun control groups like to use the term to spread misinformation like the belief that anyone can walk into a gun show and walk out with a gun, no questions asked. Well, the law and a lifetime of going to gun shows informs me otherwise.

Just like sporting goods shops and brick and mortar gun dealers, every FFL holder at a gun show (who make up the vast majority of exhibitors) must have every buyer fill out a federal form and perform a background check against a national database. The rules are the same everywhere and gun shows are subject to the same InstaCheck system that the rest of the country employs. If you don’t pass the background check, you don’t get a gun.

In some states, private sellers (read, noncommercial folks who sell a gun occasionally in their home state) are allowed to transfer weapons to patrons without the requirement of background checks. They are however prohibited under federal law to sell guns to felons or any person not legally allowed to own a gun (i.e. those deemed mentally defective). If they do so, they are breaking the law and this is why many private sellers chose to perform background checks anyway. Beyond this, private sales can happen anywhere — the seller’s home, a flea market, out of the trunk of a car — not just gun shows.

We have seen the enemy…

Statistically speaking, gun shows are an insignificant demographic violent crime-wise and that includes guns bought at gun shows illegally and then used in the commission of a crime. Why? Well, the easy answer is that gun shows have proven that they aren’t a safety risk. Then too, the kinds of guns you find at a gun show skew 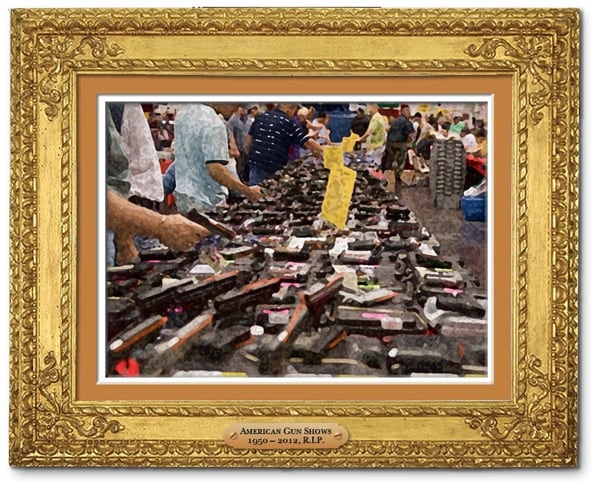 much more towards legitimate weapons, as opposed to cheap revolvers, Saturday Night Specials and other low-cost, low-quality firearms favored by the criminal element. Why? Because gun show vendors are responsible for their wares to the ATF. You’re simply not going to see vendors selling junk guns or something with the serial number filed off of it — it’s not worth the risk to their livelihood.

So if gun shows are not the problem, why does the Brady Bunch, et all, have such a problem with them? Because of what they represent, which is a bunch of different types of gun owners. You’ll find all types at a gun show: hunters, self-defense minded people, sport shooters, collectors. You think of the person, you can find them at a gun show which says to me gun shows aren’t the problem, they’re the proof guns aren’t a problem.

While it’s clear the anti-gun forces would dearly love to take down gun shows, I don’t think that will be the death of them. No, if anything would be responsible for the extinction of gun shows, it will be the Internet.

That’s right. While there’s no substitute for actually holding a gun in your hand and examining it personally, the Internet has provided a free marketplace (eBay, Google and a couple others not withstanding) to buy, sell, and trade guns and, perhaps even more importantly, it’s also provided a sure-fire way to determine the market value of guns, both new and used. Why guess at the value of an old Colt 1911, when you can search GunBroker.com and get a list of comparables? And if you’re in the market for a particular model, all you need is a willing FFL holder (and pay their transfer fee) and you can get just about anything you want, shipped PDQ.

Progress or not, the Internet is killing the gun show business. The last few shows I’ve visited, I’ve seen guys with their iPhones out, looking up prices. It doesn’t take a math wizard to know that these dealers don’t stand a chance here.

Don’t believe me? I used to work in the music industry, selling guitars, drums and such. Your typical guitar was an “A” item. We’d pay 50 percent of MSRP and sell it for something between that and our price. On average, our margins were at least 30 percent and sometimes as high as 40 percent for a hot model. Today, the Internet has changed all that. Local music stores have to sell merch at the same price you can buy it online – or they won’t move it. Margins are around 5 percent, at best.

Now, it’s one thing to be a sporting goods store and have to exist on 5 percent margins. You’ve got lots of other stuff to sell, and much of that stock are “demand” items – things people want to buy right now and simply won’t/can’t wait for a better price or doesn’t require waiting for the UPS truck. But to be a “Mom n’ Pop” operation that exists to travel from gun show to gun show? You live and die on what you make at each show. No profit – no reason (or ability) to stay in business. Information is power, and the power has shifted to the buyers –I don’t see that changing any time soon.

Oh, sure, gun shows will limp along for a while. Some of the bigger ones will outlast the small, regional ones. But make no mistake. Gun shows are on the endangered species list.