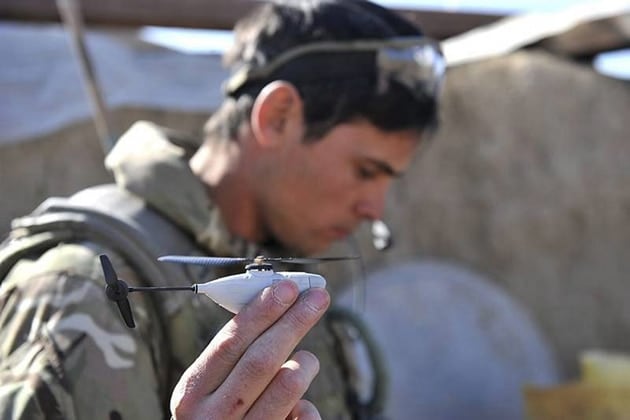 Built by Prox Dynamics, a Norwegian manufacturer, the Black Hornet is a tiny spy heli-drone equipped with video that is now being used by British Soldiers.  Weighing only 16 grams and coming in at a length of 4 inches, the Black Hornet is the worlds smallest military drone.  The idea behind the small drone is that it is meant to be used by singular soldiers at their own discretion, bypassing long distance communication or chain of command.  A soldier can use the drone to fly in close quarters in their surrounding area to gain vantage points not otherwise possible.  The Black Hornet is not armed, it only communicates video back and forth to the operator. 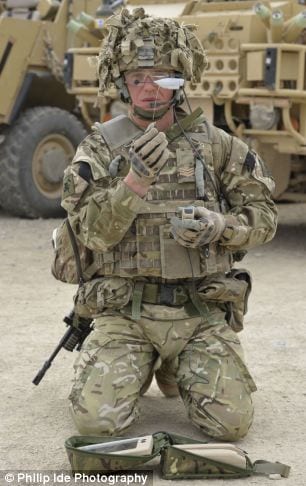 In an interview with the Daily Mail, Major Foden, 34, said: ‘Black Hornet is a game-changing piece of kit. Previously we would have sent soldiers forward to see if there were any enemy fighters hiding inside a set of buildings. Now we are deploying Black Hornet to look inside compounds and to clear a route through enemy-held spaces. It has worked very well and the pictures it delivers back to the monitor are really clear. And Black Hornet is so small and quiet that the locals can’t see or hear it.’

Another soldier stated: ‘It’s a cool piece of kit. The pictures are amazingly clear and we can see who is a local civilian and who is a Taliban fighter and whether any weapons are being stored there. We can then make our plans accordingly. It saves a lot of time and a lot of mistakes. It can zoom right up to somebody’s face and hold that frame for as long as is required without them even knowing it’s there. It makes it possible to identify a high-value target.’

There are currently 160 units being used by the British Military.