The SHOT Show happened in  Las Vegas, almost a month ago.  I’m still making phone calls daily, and sending countless emails, trying to line up reviews of new guns (and trying to find ammo, so when they get here we’ll be able to actually shoot them).  I’m still trying to process everything.

And part of that processing is looking for trends within the industry.  Some are easy to see.  If you want a whacked out paint job on an AR-15, 2013 is your year.

Or maybe not.  The paint is easy enough to come by, but the AR-15s that go below that paint are looking ridiculously scarce.

And that in itself is the biggest trend.  There was a pall surrounding the 2013 SHOT Show.  No one knows what’s coming.  That industry uncertainty certainly dominated the mood of the big show in Las Vegas, and it killed the Eastern Sports and Outdoor Show.

But outside of the SHOT Show, people are buying everything available.  Guns.  Ammo.  Magazines.  By all accounts, 2012 is a record setting year.  2011 was record breaking.  In fact, sales of rifles, shotguns, and handguns have been on a steady rise for the last 10 years.  And the last quarter of 2012, which will detail Americans’ response to Obama’s second term and Sandy Hook, will dwarf everything that has come before.

But that’s the now. What’s to come?

Admittedly, I have a hard time looking forward, but there are some subtle indicators of trends.  A number of the new guns at the SHOT Show (or new versions of existing guns) have threaded barrels as standard features.

This isn’t earth shaking news, I know.  Other guns have had threaded barrels.  It isn’t like this is a first.  But it seems to be becoming common.  Does it sound anticlimactic?  I don’t think it is.  I think it is hugely important, as it means silencers (which aren’t exactly easy to get) are becoming more common, and losing their association with cliched cinematic assassins (which is why they were taxed so heavily in the first place).

Why the sudden resurgence in the popularity of silencers?  We could talk about how CNC machining makes manufacturing silencers easier.  Or advances in material science.  But there’s a factor that many overlook.  The $200 NFA tax stamp (mandatory for every suppressor purchase) has become affordable.

In 1934, when the NFA was enacted, the $200 tax stamp on an NFA firearm was a bit expensive.  Adjusted for inflation, the same tax stamp would cost somewhere in the neighborhood of $3,300.00. 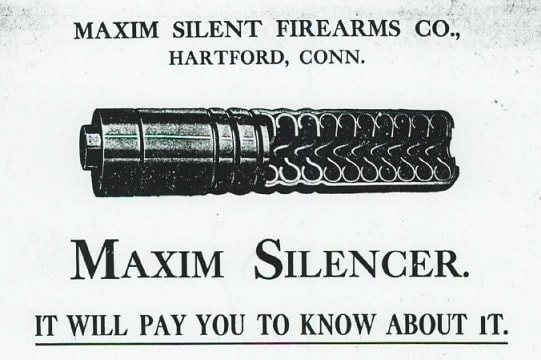 But the price hasn’t risen.  This loaf of bread still costs a nickel.  The costs still add up.  After you’ve bought a gun, paid for a silencer, forked over some scratch for Uncle Sam, and ponied up for all of the various fees, you’ll have to get a thesaurus do describe your next purchase.

The threaded barrel is subtle, but it is something.  If you want it, it is already done.  Sorry gunsmiths.  Threading a barrel on a CNC machine is just a few more lines of code (and a bit more tool sharpening).  And we are one step closer to having the silencer, the most logical of firearms extras, be a standard feature.

Take cars, for instance.  Most of us wouldn’t think of driving a car without a muffler.  We could do that with guns.

Silencerco launched a website in 2011 called Silencersarelegal.com.  Though the site is clearly a marketing tool for Silencerco and their sister company SWR, it is serving the entire industry.  The site covers all of the basic educational talking points for silencers, and covers everything from basic history to current grassroots efforts at activism.

The states marked in red allow the legal use of silencers.

The site reports that more than 27,000 civilians buy silencers every year.  Imagine how many more will opt for a suppressor when the guns they already own already have threaded barrels?

Silencerco was a huge hit at this year’s SHOT Show.  Their new 5.56 suppressor, the Saker, is exquisite.  And SWR has a .30 can that is ideal for bigger rifles.  Together, Silencerco and SWR are covering a lot of ground.

Here are the new guns

I know full well I will have missed something in the group that follows.  It isn’t meant to be exhaustive as much as representative of this larger trend.  There were other companies at SHOT with threaded barrels: Kriss, Sig Sauer, Smith & Wesson, Armalite, and HK. They were surprisingly common.

The two calibers I see most frequently are the .22 LR and the .45.  These two trends couldn’t be any more distinct.  The .22 is all about plinking, target shooting, decimating insurgent rodent populations… The .45 has a decidedly tactical feel.  The venerable old .45 ACP; still at work. 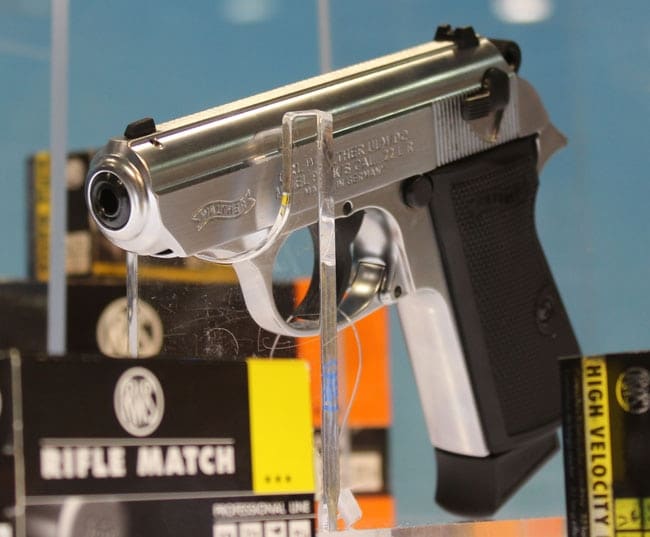 The PPK’s barrel is threaded, but subtle.

The Walther PPK in .22LR

Let’s start small.  The Walther PPK .22LR.  New and improved.  The barrel is already threaded, though you wouldn’t notice it unless you’re looking for it.

The threads are capped, and the cap tucks up under the edge of the frame.  It will require an adapter, but it is already done, and will be standard on all of the guns.

This gun is really nostalgic and fun.  It should end up selling for around $400.  While it won’t see all that much use in self-defense applications, and probably won’t be extraordinarily accurate, the .22 PPK will satisfy a lot of collectors who missed their chance the last time Walther made the gun (back in the 50s: the PPK-L). 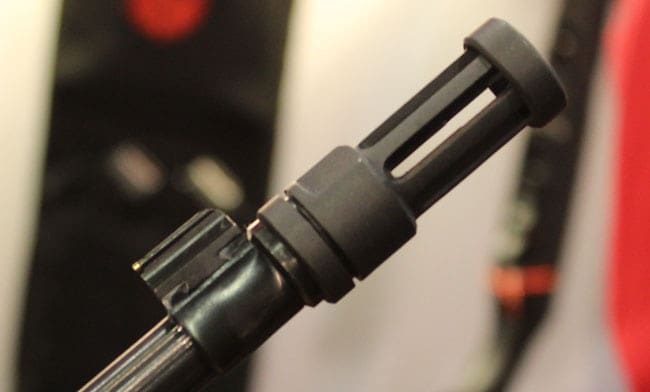 The new barrel on the 10/22 Takedown, threads under the flash hider.

Ruger has elevated the rimfire platform to high-art.  And they like the threaded barrels.

The new version of the 10/22 Takedown is silencer ready.  The end of the barrel is capped in a (mostly decorative) flash hider.  While it gives the 10/22 an edgy look, it also protects the threads that are really meant for a silencer.

A good can on the end of a 10/22 is going to make this gun whisper quiet.  The action should be the loudest sound. 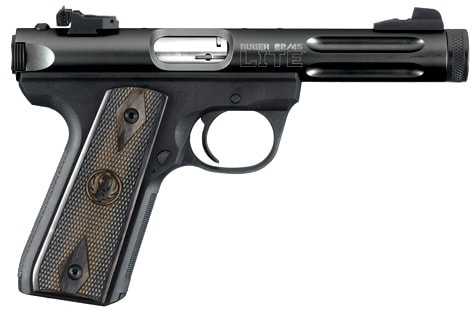 And if you’d rather have a pistol, Ruger’s cleaned up their 22/45 Lite.  In 2012 they released the 22/45 Lite.  Though the barrel in this champagne colored (not pictured) pistol is threaded, the gun wasn’t exactly handsome.

Their new 22/45 ditches the odd color scheme and the deep faux-slide serrations.  It looks much better now.  Thanks, Ruger.

And Ruger is still offering other threaded barrels.  Their SR22 is now available with threads.  While I don’t like this gun half as much as I do the 22/45 or the Mark III, the SR22 has fans.  And it will have even more now.

And if you’d like a 22/45 with a threaded barrel that’s optics ready, Ruger is still offering the 22/45 Threaded Barrel. 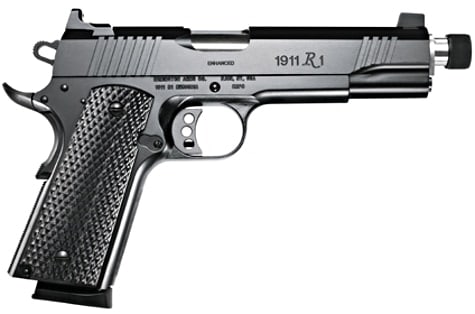 If you’re looking for something with a bit more punch than the .22, Remington is offering a version of their R1 1911 with a decidedly tactical flair.  This new take on the classic has a threaded barrel, and is much more modern in its detailing.

This is a series 80 1911 that’s tricked out (at least for a Remington).  The sights are espescially high, which allows for easy aiming over the top of a can.  It might be a little tricky to get out of a holster, but I haven’t seen many silencer ready holsters anyhow.

What’s missing?  A rail on the bottom.  I’m surprised that isn’t standard, but I guess if you don’t want to be heard, it goes without saying that might not want to be seen either. 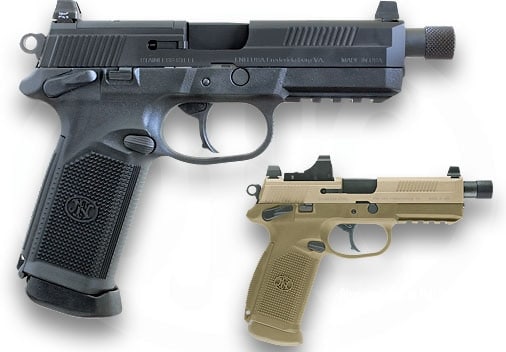 Or you can really embrace the modern handgun aesthetic with the FNX-45 Tactical. This is a beast.  If I were heading off to fight overseas, I’d want one of these on my hip.

And the FNX has another feature standard.  If you look closely at the top of the slide, just ahead of the rear sight, you will see a removable panel.  This milled section is designed for a micro red dot.  Sorry gun smiths.  Again, FNH seems to be building custom features into their weapons from the start.

The demand is clearly there from the market.  The only unknown seems to be how the ATF will respond to increased NFA requests in light of the current political attention that all firearms are receiving.

I sent in my paperwork three months ago.  I’m entering the suppressed scene with a Silencerco Sparrow.  It is (and has been) sitting in a safe at Gary’s Guns and Transfers, outside of Richmond, for way too long.

I know I’ll get my money’s worth from it.  I’ve had several .22LRs come in with threaded barrels.  It is a big selling point for those who are really dedicated to the silenced philosophy.

In the end, I’m not sure if I’d call my big threaded barrel theory all that ground breaking.  In fact, it seems pretty modest.  But it is a sign of good things to come.  And it is nice, I feel, to see what the industry was thinking about before all of the politics took over the conversation.

If and when everything calms down, we’ll see how easy it will be to get the paperwork approved.  And we’ll see guns that are easier and safer to shoot.