Finally.  A voice we can trust.  Sylvester Stallone, most notable for his roles Toymaker in Spy Kids 3-D: Game Over, and Weaver (voice only) from Antz, has finally used his celebrity to help make the world a better place. 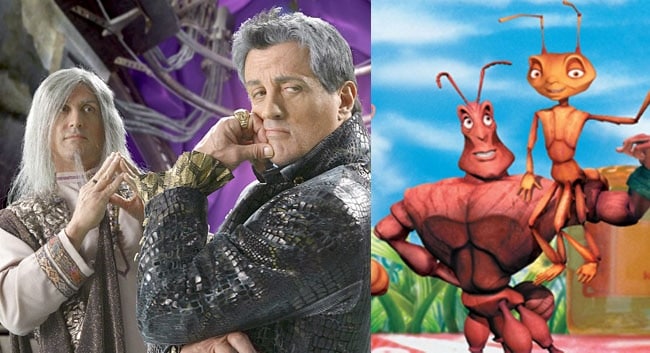 The Toymaker and Weaver

The 66 year old icon of peace and morality shared his views on guns recently in an interview with the Associated Press.

“I know people get (upset) and go, `They’re going to take away the assault weapon.’ Who … needs an assault weapon? Like really, unless you’re carrying out an assault. … You can’t hunt with it. … Who’s going to attack your house, a (expletive) army?”

Yes.  People are upset.  They’re going to take away the assault weapon.  I guess, if there’s only one, it should be taken away. 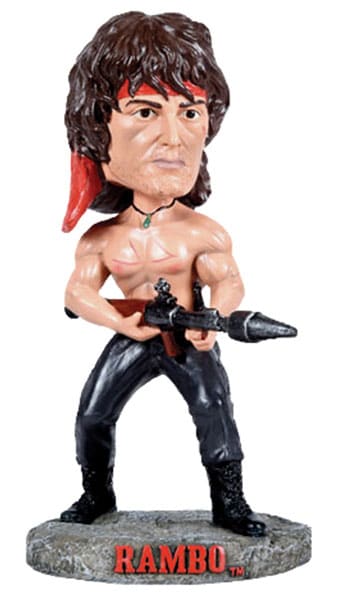 I’m glad Sly has decided to weigh in on the debate.    As an industry insider who understands the practical applications of modern sporting rifles, I often look to ex-porn stars and half-assed screen writers for guidance.  It helps if they’re licensed gun owners (in California, no less) who lend their unassailable credibility to the support of the Brady Bill, while building their own fortunes on a foundation of globally disseminated bullshit meta-violence that, in many parts of the planet, reduces the American G.I. to a grotesque caricature.

There’s more to the AP story.  Stallone, ever vigilant in his efforts to help right the wrongs in American society, continues.  “It’s unbelievably horrible, what’s happened,” Stallone Said.  “I think the biggest problem, seriously, is not so much guns. It’s that every one of these people that have done these things in the past 30 years are friggin’ crazy. Really crazy!”

Right.  The massacres that happened 40 or 50 years ago, though — like Charles Whitman (who killed 14 and wounded 32 at the University of Texas in 1966) — those upstanding citizens must not have had mental health issues.  Thanks for clearing that up, Sly.

But he isn’t finished!  “And that’s where we’ve dropped the ball: mental health,” Stallone said. “That to me is our biggest problem in the future, is insanity coupled with isolation.”

Quick.  Someone get this whiz-bang some funding.  He’s onto something.

Stallone’s opinion on guns is nothing more than pissing into the wind.  Yet it’s getting ink.  Why do we, as a culture, place so much stock in our celebrities?  Is it a fundamental need to worship something?  Is it the notable absence of royalty in American society?  Is it rooted in our desire to build someone up so we can watch them fall, hard?  Or, as Stallone demonstrates, do we like watching the underdog claw their way to the very top?

It is a topic for a doctoral dissertation, and not editorial. 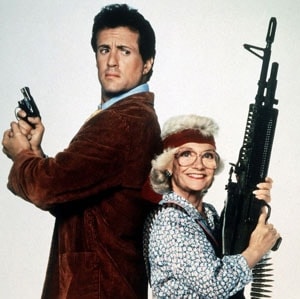 Stop or Estelle Getty Will Star in a Terrible Movie

This is useful for us

Stallone is a gift.  When some celebrities use their celebrity to endorse or oppose things they know nothing about, Americans pay attention.  It doesn’t make any sense, but it happens.

CNN ran an opinion piece yesterday that detailed celebrities that are voicing opposition to the National Rifle Association.  And some people will, undoubtedly, listen.

When Stallone says he is in support of a “tak[ing] away the assault weapon,” no one will take him seriously.  How can you?

Anyone who attempts to use Stallone will be easily discredited.  He’s not going to be the poster-boy for civilian disarmament.  Even if he wants to be.

There are too many who associate Stallone’s millions (estimated at $275 million) with gratuitous violence.  And Stallone is just an exaggerated example of countless celebrities that speak out against guns (when they’re not on set dramatizing acts of gun violence).

The tie to violent media

We have no concrete data (yet) to suggest that there’s a link (however tenuous) between violent movies and video games and the tendency to commit violent acts.  But does anyone besides Stallone really doubt it?

I’m not sure.  But I haven’t written a word of fiction since Sandy Hook.  I’m still trying to figure out how my art relates to real horror.

But because there is real horror in this world, I haven’t put down my gun. 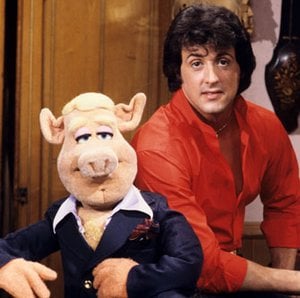 Stallone (on left) on the set of The Muppet Show.

Old Sly. The Internet Movie Firearms Database has a ling list of firearms used by movie characters played by Stallone.  There are 66 firearms in the list, and that’s before Bullet to the Head, (which we can only assume will be a nuanced dissection of the role of modern sporting rifles in legitimate sporting uses, and how that is corrupting American society).  Odds are, Bullet to the Head will feature at least one gun.

Our right to free speech allows us to say just about anything we want.  Even friggin’ crazy, really crazy things that don’t make any sense whatsoever. 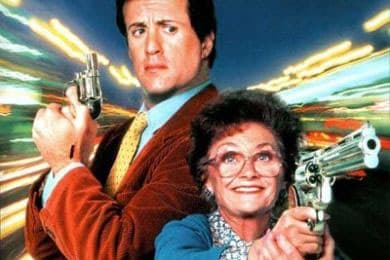 And this is Stallone, the man responsible for both Rocky and Stop or My Mom Will Shoot (an under-rated cinematic masterpiece that narrowly missed canonization by the American Film Institute’s Top 100 Films in the Entire History of Films, Ever list).

And it gets better.  While in London in 1999, Stallone commented on the murder of actor Phil Hartman.  “Until America, door to door, takes every handgun,” Stallone Said,  “this is what you’re gonna have. It’s pathetic. It really is pathetic. It’s sad. We’re living in the Dark Ages over there.”

Now if you don’t remember the incident, Hartman’s wife Brynn, who shot Hartman, had some anger management issues.  She was also drunk, doped up on cocaine, and abusing Zoloft (which had not been prescribed for her).

And if America does, door to door, take every handgun, America might find at least one with Stallone.  As recently as 2008, Sly had a concealed carry permit issued to him in LA.  Details of his permit request are, mostly, a matter of public record, and can be found (scanned and all) at blog.riflegear.com.

Maybe he’s not as dumb as most of his characters sound on screen.  Stallone has, or had a concealed carry permit probably for the same reason we all do.  Does that mean he has to be decidedly pro Second Amendment?  No.  Not at all.

Because it is just such ludicrous hypocrisy that makes Stallone real.  He’s deeply flawed, and just as friggin’ human as the rest of us.