Walmart to ration ammo sales for duration of shortage (VIDEO) 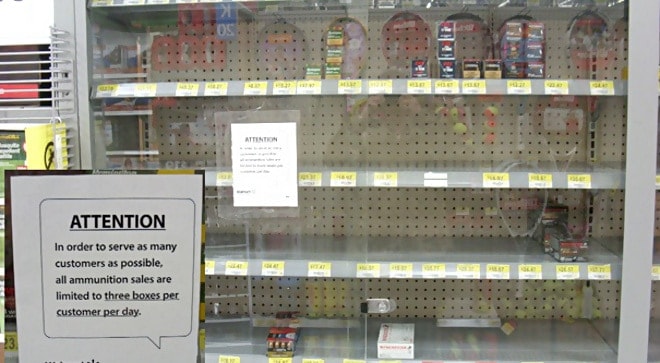 After months of runaway sales of guns, ammo and firearm accessories, Walmart is setting a new policy to limit the number of boxes of ammunition customers may purchase per day. With customers stocking up on everything gun-related in reaction to recent proposed gun control laws, retailers have had nothing to show but bare shelves across the nation.

The limit is three boxes of ammo per day per customer, until the shortage is resolved. The ammunition shortage is so severe that many police departments are unable to acquire rounds for their officers.

“Right now we’re monitoring supply issues daily, since supply is limited at this time,” said Ashley Hardie, a Walmart spokeswoman. “We’re trying to take care of as many customers as possible and we’re working with suppliers to put products back on shelves.”

This way some customers will at least get the chance to buy ammo; Walmart certainly isn’t losing business by selling all of their product to a small group of buyers but they do face losing customers if they can’t serve everyone.

And this policy is sure to please, with other retailers simply raising prices in response to increased demand.

Some people have been buying all of retailers’ ammunition and re-selling locally and online through auction websites at enormous mark-ups.

Gun sales have been breaking records for months in a row, with more than 2.7 million background checks run during the month of December. NICS checks declined in January, not because of a waning interest but rather a lack of supply; distributors and manufacturers simply don’t have guns to sell.

“In the last twelve months, over 20 million background checks have been performed by the FBI”, wrote the Market Daily news.

“That amounts to a gun being purchased in America about every 1.5 seconds.”

Still, there will likely be some people upset that they will not be allowed to buy more than three boxes of ammunition from Walmart at a time. Sixty rounds of .223 is easy to use quickly. But the people who are most likely to be offended by the new policy are the profiteers.

How long do you think the shortage will last?

Do you think prices will eventually drop to their pre-panic levels?