Right after Christmas, when everyone realized that all things AR-15 were selling out, I decided I really needed more Magpul PMAGs (believed by many to be the best magazine for the money).

While I don’t own an AR-15, I review them from time to time.  I have a smattering of random magazines, including some PMAGs, but not enough.  So I started looking.

I wasn’t alone.  Many fans of the AR platform, fearing a ban on “high capacity” magazines, stocked up.  Just like we saw with ammo (and continue to see), standard capacity magazines sold out fast.  Brownells, one of the nation’s leading firearms supply retailers, sold 3.5 years worth of Magpul PMAGs in 72 hours.  That more than a year’s worth of magazines a day.  And that was only what they had in stock.

When those were gone, Brownells allowed customers, including me, to back-order magazines. 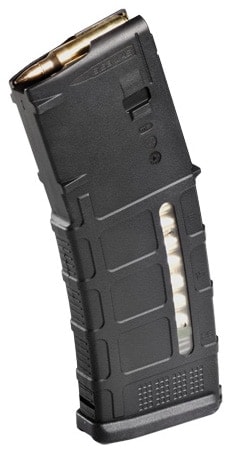 Brownells, who just launched their redesigned website last fall, is a trusted retailer.  They’re active in community outreach and national initiatives.  Just this past week, USA Today ran an in-depth profile of Brownells, and the company’s ties to Iowa’s economy.

So when they make promises about back-orders, and customer satisfaction, we all take them at their word.

But the venerable company took a huge hit within the firearms community when rumors began to circulate about how Brownells was choosing to fill their back-orders.  It seems some orders (from this past January, for instance) were being shipped before orders that had been placed in late December.

And then this banner showed up at Brownells.  No more back-orders.

What started out as a collegial way for AR fans to grieve about their PMAG orders at AR15 dot com turned ugly (some 30 pages of ugly) when the details about order dates and shipment dates leaked out.  And the news went viral, leaving many loyal customers questioning Brownells reputation.

Here is Brownell’s response, emailed on February 7 to all of the customers still waiting for their PMAGs.

Dear Folks,
We want to thank everyone for your patience with us. Thanks especially to those of you who told us orders were being delivered “out of cycle.” We’ve been in business an awfully long time and are proud of our reputation for great service, so we had to find out what was going on.

And we found the problem. Simple really. About 15 years ago we put in place system logic prioritizing a few back orders ahead of others. It was a rare situation, but necessary at the time and under normal market conditions back then, those reasons made sense.

Then the world changed, and back orders ballooned into the thousands – literally – and our system and the vendor’s ability to keep up just broke that logic. About 300 orders were moved to the head of the line under the old system logic, and had their orders shipped ahead of where they should have been in line. It moved all the rest of you back about 300 places in line – which, rightfully so, caused an uproar.

When we found the problem, we immediately disabled this logic, truly resuming our first in first out policy. The real problem is that demand is far greater than any factory’s ability to quickly catch up.

The good news is we have cured the broken system logic; thanks for telling us. We are shipping in order received, and handling your orders the way we have always tried to – honestly, fairly, and with everything right on top of the table.
Best,
Frank & Pete Brownell

What exactly does “system logic” mean?  I’m not sure.  I’m in contact with Brownells concerning the issue, but I’m still awaiting a response to that question.  I’m sure they’ll get back to us soon on the matter.

For most of us, this explanation will right the wrong.  I’m still waiting on my PMAGs, but I’m content to wait.  I appreciate that Brownells allowed back-orders, and that they didn’t raise their prices.

If you have to have PMAGs, they are for sale, in many places, for more than I’m willing to pay.

As for the competition.  Thermolds are still available.  Tapco has some, and their redesigned mags are on the horizon.

But we’ll give the last word on this issue to the satirists.