Savage, working with the Youth Shooting Sports Alliance, is adding two new models of bolt-action Axis rifles for kids. They’re 100 percent Axis with new finishes, one traditional woodland camo and the other a blazing pink and black “camo”.

Called the “Muddy Girl”, the pink rifle has a wild pink, black and silver print that at one point was a tree-filled skyline but is now, well, trippy. In a cute way. Both models have plain matte black finishes on the steel parts of the gun, save for the stainless bolt.

Both of these new rifles will be available in .223 Remington, .243 Winchester and 7mm-08 Remington. They have the same MSRP as adult-size Axis rifles with the camo finish, $475, which is $65 more than the plain models. Retailers are likely to list them for around $350 or less.

Savage’s Axis series is their new lineup of entry-level bolt action rifles. While they don’t cost much, they don’t sacrifice much by way of build quality. Axis rifles keep costs down by using more modern and less expensive manufacturing techniques. 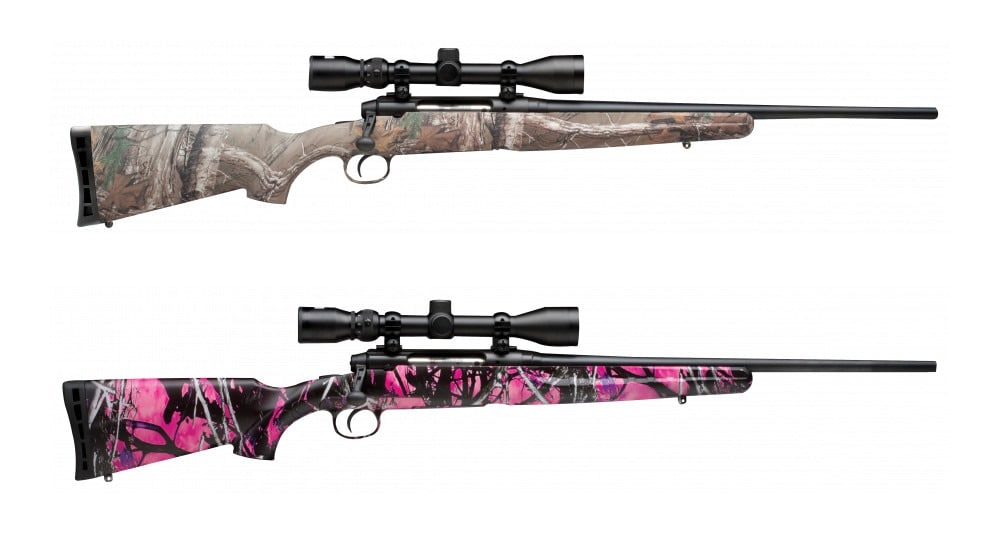 The rifles chambered in .223 have a 1-in-9 rate of twist, so they can be used with lightweight bullets for plinking and target shooting as well as heavier projectiles for hunting. All models come with 22-inch barrels and have an overall length of 40 inches.

They weigh in at 6.8 pounds, which isn’t lightweight but is enough to help with the recoil without making it a burden to carry around. They all feed from detachable 4-round magazines.

Savage introduced the Axis series to replace their Edge rifles. They have dual pillar bedding, polymer stocks and are rated to shoot 1.5 MOA or less from the factory. They’re popular for their smooth actions and crisp triggers. The triggers aren’t adjustable, and weigh in at about five pounds.

For more details, check out the Youth Camo and Muddy Girl product pages. If you’re interested in finding out more about the Youth Shooting Sports Alliance, head over to their website.