The United States was a young country in 1813 and was fighting for its life against the might of the British Empire for the second time in just a few decades. The weapons that these US soldiers carried in the field 200-years ago helped win the day and keep the country independent in the War of 1812.

During the Revolutionary War (1775-1783) of the previous century, the Colonial Army under General Washington fought with whatever they could find. These included so-called German Jaeger rifles, fowling guns, English Brown Bess muskets, and French imported Charleville muskets.  However once the war concluded most of these weapons simply walked off the battlefield and went home with the discharged soldiers. This left the Army with no choice but to start from scratch in terms of outfitting its troops.

American fighting men had used rifles as far back as the 1730s in one form or another. Rifles were much more accurate than smoothbore muskets, capable of taking aimed shots out to 300-yards. Accordingly, the new country first bought some 3500 “Contract” rifles for $12 each in 1792 just to give the Army something to shoot with. These guns were simple flintlock muskets made of the “Kentucky rifle” type and chambered in .49-caliber with a 42-inch barrel.

No less than 17 independent gunsmiths made these rifles by hand and these guns are believed to be the first marked “US” on the barrel (this was so that they wouldn’t vanish as the last Continental Army’s had). A few of these survived long enough to serve in the War of 1812, but by that time most of the grunts carried…

With almost every Contract Rifle made being unique and parts interchangeability non-existent, the Army formed its own arsenal in Springfield, Massachusetts. Established by George Washington in 1777 to make artillery carriages, the Springfield Armory as it became known, made the nation’s first muskets in 1795.

Based largely on the design of the French Charleville, the Springfield was a 10-pound smoothbore flintlock with a 42-inch barrel and an overall length of five feet. With the 16-inch long spike bayonet fitted to the end of the musket, it stood taller than the men who carried it. Firing a .69-caliber ball it was accurate only to about 75-yards but could still cause damage two football fields away making the gun more of a volley than a precision (or even accurate) weapon.

Still, a trained US soldier of the era could crank out three rounds per minute. It was regarded as slightly more effective than the .75-caliber British Brown Bess musket and Yankee marksmanship was a key factor in several battles.

While the muskets were mass-produced, they still had to be fitted by hand and the patterns used in their construction constantly evolved. This means that while repair and parts replacement was possible, it was not always fast. Eventually some 150,000 of the muskets were built between 1795-1818 at both Springfield and Harpers Ferry and the sturdy weapon fought not only in the War of 1812 but also in the Mexican War and continued to serve in the Civil War with the grandsons of the men who initially carried them into battle.

With stocks of the 1792 Contract Rifle (see above) growing pretty thin, and the musket revealing the weaknesses in its maximum 75-yard range for aimed shots, the Army wanted a lighter, shorter gun for use by skirmishers, snipers and the like, frequently enlisted to augment the troops. In 1803 at the new Harper’s Ferry Armory in Virginia, the Army got its wish when 4,000 new pattern rifles were put into production. A brass patch box was built into the buttstock of the rifle to hold accessories and speed reloading.

Not built for hand-to-hand combat, the rifle had no provision to mount a bayonet. This didn’t matter: with a 33-inch long .54-caliber octagon barrel firing a small (for the time) .525-caliber ball, the Model 1803 Rifle was both downright handy and accurate. With it, a trained rifleman could massacre enemy troops armed with muskets a good 150 yards further than said enemy could accurately shoot back. This made the Harper’s Ferry Rifle a hit with troops of the 1st US Regiment of Rifles who inflicted grave casualties on British foot soldiers at the Battle of York (present day Toronto) in 1813. 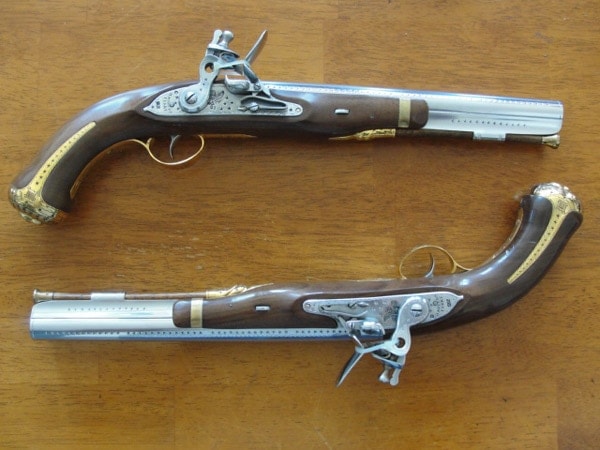 While muskets and rifles were chic with foot soldiers, officers and cavalrymen of 1813 (who fought right along side those grunts) needed something a bit handier. In 1805, the Secretary of the Army ordered 200 ‘braces’ of pistols to equip these equestrians.

At the time, these large barreled ‘horse guns’ or ‘horseman’s pistols’ were built (with matching serial numbers) and issued in pairs. They were not worn by the horseman but instead carried over the pommel of the saddle in a set of holsters, one on each side. These used the same .525-caliber ball of the Harper’s Ferry rifle from a 10-inch smoothbore barrel. Some 4096 of these were produced (2048 braces) and the cavalry of the time counted themselves lucky to have such hand cannons at their disposal. 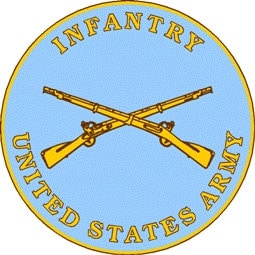 The 1795 musket can be seen on US Army badges today.

These weapons were the first true “US” military firearms built for and carried by the US Army into war. As such, they are some of the most valuable to American collectors. To give you an idea how important these weapons are to US military history, the imagery of a brace of Harper’s Ferry pistols adorns the insignia of the US Army’s Military Police badge while a pair of crossed Springfield Muskets makes up the Infantry badge.

Today any one of these guns are so highly prized on the collectors market that auction prices approach $2,000 even on the most common and well worn of examples. Rare models like original Harper’s Ferry pistols or Contract Rifles are difficult to put any sort of a price tag on and they can quickly fetch many times this amount as only a few 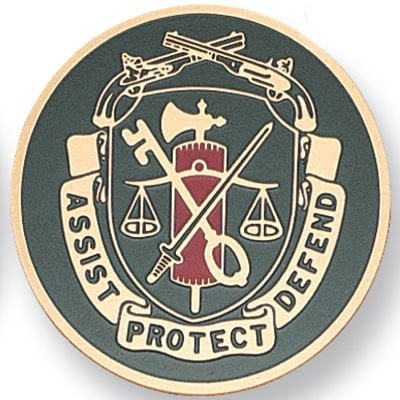 hundred of each are still thought to be in circulation. In kind, whenever you think you may come across one of these 200-year old vets, be sure to have it thoroughly inspected and verified by a respected arms expert before entertaining any offer as their have probably been more of these faked than real ones ever produced.

Replica and reproduction versions of both the Harper’s Ferry Pistol and the Springfield Musket are made by both large and small companies ranging from $200-$2000 depending on the quality of the build.